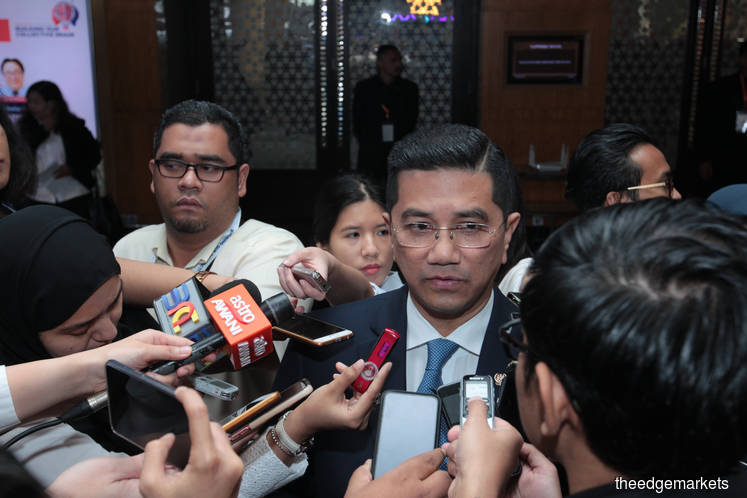 KUALA LUMPUR (Oct 22): Economic Affairs Minister Datuk Seri Mohamed Azmin Ali says Tun Dr Mahathir Mohamad should be allowed to complete a five-year term as prime minister as, according to him, this is what the people voted for in last year's general election.

"As a country that adheres to the democratic system, the people choose the government and the prime minister every five years," he told reporters at the Parliament lobby today.

"We never chose a government for one or two years," he said. "So I hope those who are desperate to come to power will respect the people's mandate in the 14th General Election, which was meant to facilitate a formation of government for five years.

He was commenting on news reports that he was working with Umno lawmaker Datuk Seri Hishammuddin Hussein to form a "backdoor government" that will block PKR president Datuk Seri Anwar Ibrahim from taking over as prime minister.

"Any party which intends to change the government, in either one or two years, that is the actual 'backdoor' government," said Azmin.

"What we should do is let Dr Mahathir be the prime minister until he completes the full term, because that was the mandate given by the people," he said.

Azmin said the collective decision by Pakatan Harapan member parties for Dr Mahathir to hand over the prime ministership to Anwar midway was just an "understanding without a specific time frame".

"I challenge any individual to state publicly that there was an agreement for transition of power," he said.

Urging the media to stop speculating on the transition of power from Dr Mahathir to Anwar, Azmin said: "I hope we can concentrate on developing the economy and help the people, while giving our full support to Dr Mahathir to continue his leadership."