Liow: VEP enforcement date yet to be determined

KUALA LUMPUR: The government has yet to decide on an enforcement date for vehicle entry permits (VEP) for foreign vehicles entering Malaysia from Singapore, said Minister of Transport Datuk Seri Liow Tiong Lai.

Speaking to reporters yesterday after his keynote address at the Urban Transportation Forum 2014 yesterday, the minister said the enforcement of the permit is still under discussion.

“We haven’t decided the date but we will be discussing the matter with Singapore. We know implementing it is important because there is a call [for it] from the public and the Johor state government,” he said.

Liow added that the cabinet has directed the Ministry of Transport to come up with a plan to implement the system, which will involve other government agencies including the Immigration Department and the Ministry of Finance.

On the possibility of concessions being offered to individuals staying in Johor, the minister said that the issue would be taken into consideration. 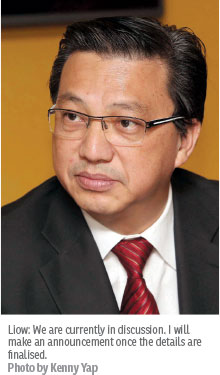 “We are currently in discussion. I will make an announcement once the details are finalised,” the minister said.

Prime Minister Datuk Seri Najib Razak had announced that Malaysia will introduce the VEP following a request from the Johor state government.

However, the move was derided by several quarters as “retaliatory” as it follows a series of toll hikes across the Causeway, coupled with a higher VEP fee imposed by Singapore on foreign cars entering the city state from Johor.

According to KGVI International Property Consultants (Johor) Sdn Bhd director Samuel Tan, introducing the VEP on cars coming into Malaysia from Singapore will hurt both Malaysians and Singaporeans.

He also cautioned that it will also affect the Johor real estate market, which is already cooling.

“All these measures will discourage Singaporeans from investing in Iskandar Malaysia or even shopping, and [so] will also affect our tourism industry. The authorities need to reconsider the changes made ... We should also be concerned about white-collar workers, most of whom drive into Singapore to work. They have the purchasing power to [boost] Johor Baru’s economy.