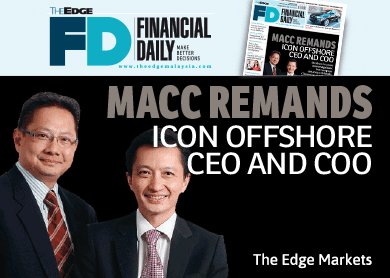 However, Icon Offshore, in a statement to Bursa Malaysia yesterday, said it is not aware of the “details of the nature of the investigations or their status”.

The company said it is committed to upholding the company’s corporate values that promote integrity throughout the entire company. Icon Offshore also said it has a code of conduct that places a high priority on upholding high ethical standards.

“The board takes serious exception to any breaches in policies and integrity, and will not hesitate to take appropriate actions if necessary. We will continue to monitor the situation and any material development shall be announced,” it said.

Jamal, who is Rahman’s younger brother, ceased to be a substantial shareholder of Icon Offshore on March 9, according to filings with Bursa. However, the statements did not indicate his equity interest after selling one million shares or a 0.08% stake on that date. He has continued to pare down his stake after that, selling some 6.2 million shares or a 0.53% stake from March 10 until April 21.

Prior to his cessation as a substantial shareholder, Bloomberg data showed that Jamal’s reported shareholding in Icon stood at 5.02% with 59.08 million shares, while Rahman had a 1.24% stake or over 14.61 million shares. Ekuiti Nasional Bhd (Ekuinas) had a 42.28% stake or 497.76 million shares in the company as at August last year.

Jamal has over 17 years of experience in the offshore supply vessel (OSV) industry. He is the president of the Malaysia Offshore Support Vessels Owners’ Association, a position he has held since April 2013.

Prior to his venture into the oil and gas sector, the 48-year old was a practising dentist for almost 10 years.

Rahman, 54, is a marine engineer by profession. He has over 32 years of experience in the marine transport and shipbuilding industry, including a senior manager position he held in MISC Bhd until 2006.

According to Icon Offshore’s website, Rahman is responsible for the group’s entire fleet operations, both shore-based and shipboard. In addition, he oversees the implementation of the group’s health, safety and environment (HSE), and security policies and procedures.

Icon Offshore is the OSV unit of Ekuinas which was listed in mid-2014. Icon Offshore’s initial public offering raised about RM944.92 million — RM534.69 million of it was accrued to the selling shareholders through the offer for sale of up to 289.02 million shares, while the public issue of up to 221.75 million shares raised RM410.23 million.

Most of the RM410.23 million was slated to be used for the expansion of its vessel fleet within 24 months and repayment of bank borrowings within 12 months.

Icon Offshore is Malaysia’s largest pure play OSV provider with a fleet of 32 vessels, Jamal said during the launch of the company prospectus last year. He also said the management intended to up the fleet size to 39 vessels by the end of this year.

In February, Icon Offshore clinched six out of the eight packages being offered by Petronas Carigali Sdn Bhd under the latter’s umbrella contract for the provision of spot charter marine vessels.

Icon Offshore had said then that it expected these contracts to bolster its order book, which stood at RM760.2 million at the time.

This article first appeared in The Edge Financial Daily, on April 23, 2015.