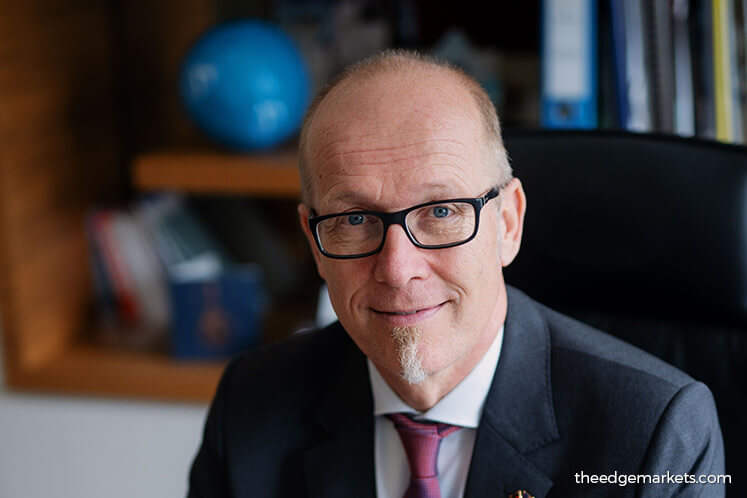 While the Restricted Movement Order (RMO) came as a surprise and challenge to the people of Malaysia, it was even worse for factory owners and manufacturers. This unprecedented move left manufacturers with more questions than answers on how they were supposed to navigate this period, especially when it came to completing the supply chain internationally.

Speaking to Enterprise, CEO and board member of the Malaysian-German Chamber of Commerce and Industry (MGCC) Daniel Bernbeck says Malaysia is an important part of the international supply chain and the disruptions have the potential for a severe long-term impact.

Additionally, the instructions coming out of the Ministry of International Trade and Industry (MITI) have been complicated and unclear, with factories being considered “essential” based on their willingness to continue operations with only 50% of their normal human resources requirements, rather than any more objective definition of “essential”.

The MGCC was invited to a meeting with MITI on March 17, at which Minister Datuk Seri Mohamed Azmin Ali explained the situation and the measures that needed to be taken. “Chambers and associations were informed that manufacturing companies had to send in their applications for exemption from the lockdown by 2.30pm the same day to prevent a complete shutdown at midnight,” says Bernbeck.

“Even though there was open communication and discussion, it became quite clear that the exact procedures and guidelines were still unclear and did not consider enough the questions of practical execution for the industry,” he points out.

He adds that the industry also learnt that the decision would be solely with the National Security Council, which would be considering the threat of the disease to the nation rather than questions of the economy.

Malaysian Dutch Business Council (MDBC) executive director Marco Winter, who was also at the meeting, says there were several immediate concerns raised by manufacturers such as the level of bureaucracy in the application process for exemption and whether the RMO would be extended.

“There were also questions of how clear the list of what was considered ‘essential products and services’ would be. And how the authorities would deal with the full supply chain for the manufacturing, and possibly imports, of these essential goods,” he adds.

“We are talking about suppliers of components and all the logistics involved, some even cross-border. Would the authorities have the knowledge of integrated supply chains?”

The situation was chaotic right from the beginning, says Bernbeck. It was obvious MITI did not expect thousands of applications.

“It clearly showed that the prescribed processes did not consider the fact that worldwide supply chains are far too intertwined and Malaysia’s industrial sector is a supplier to the rest of the world. So, it was not possible to clearly separate essential from non-essential production,” he says.

The supply chain issues were indeed one of the greater challenges, even for MDBC. Winter says although Azmin announced that as part of any approval, the full supply chain would be included, the reality on the ground was completely different.

“Police had their own orders, so warehousing and distribution were shut down, affecting incoming supplies as well as delivery to retail. Several days later, it was announced that parts of the supply chain had to submit applications to the Ministry of Domestic Trade and Consumer Affairs, so another bureaucratic process was added, with a new waiting period,” he says.

Nonetheless, Bernbeck says the staff at MITI were working day and night to solve the issues. WhatsApp groups were formed, which included high-ranking officials of MITI to reduce miscommunication and delays in the distribution of the updates.

“MITI was doing their absolute best to cope with the situation. But the conditions were not appropriate to handle this issue properly, while MITI staff were working from home themselves,” he adds.

Another concern of manufacturers was their ability to fulfil production with less than 50% of their total workforce, which was a stipulation to receive the exemption by MITI, says Winter.

Bernbeck says  it turned out that the main factor for a successful exemption application was, in fact, the reduction of the workforce rather than technical questions of the respective industries. “Based on that, a significant number of companies were able to obtain an exemption and are continuing production at a reduced level.”

The manufacturing sector was most affected during the RMO because it meant no production, no sales and no income, he says. “It is very risky for the enterprises, especially the small and medium enterprises (SMEs) to survive the coming months. In addition, the industry is strongly demanding support on HR matters — being forced to pay full salary without being able to generate any income will lead to layoffs, investment cuts and even a wave of bankruptcies in the mid-term.”

Mitigating the processes has not been easy for all the parties involved, Winter acknowledges. On the one hand, MITI had to deal with thousands of applications. On the other, companies eagerly wanted to avoid having to close down operations.

“Companies were only allowed to restart operations one to two days later, which caused unnecessary disruption of their production, with some of their workers possibly leaving town,” he says.

Some manufacturing plants are not easy or even impossible to close down within 24 hours, says Winter. This could cause all kinds of issues, from contamination to major difficulties when restarting the plant.

“Some [companies] were very eager to continue production because they knew that their products were essential and they did not want to see any disruption in their supply to the rakyat (for example, food and personal care products). So, each delay in the application process caused agony,” he says.

“First, it was the wait for information and guidelines on the application process. Then, there were problems with the MITI website and there was a wait for alternate ways to make any submissions.

“And finally, the wait for approval. In the meantime, companies were forced to shut down operations.”

The companies that are most affected during this time are those that have foreign orders to fulfil as they can neither manufacture nor export at the moment, says Winter. “Malaysian authorities have to be aware that many international companies have set up manufacturing operations in the country, which are part of international supply chains.

“Some of these companies play a major role in global production, also for the production of essential products in other countries. Maybe they are not perceived as essential for Malaysia at this moment and therefore not provided with any exemption, but this will cause Malaysia to interrupt global supply chains.”

After more than one week into the RMO, the most important thing to do now is to support SMEs as they are earning close to nothing, says Winter. “This will come down to providing support to lessen the burden with regard to human resources costs. SMEs may go out of business and the population may lose their jobs and with it, their monthly income.

Meanwhile, Bernbeck calls for coordinated, clear, steady and reliable processes as well as clear guidelines for the industry — not just for manufacturing but also services, logistics, traders and so on. “The worst that can happen to them is that processes are changed and redesigned or stopped overnight, leaving them with no clue as to how to find their way through.”

The chamber sent out a flash survey to member companies, which ran from March 20 to 25, to which it received responses from 20% of its members in Malaysia. Over 60% of the respondents indicated that their companies were being severely impacted by the Covid-19 outbreak as well as the RMO and subsequently the Movement Control Order put in place from March 18 onwards.