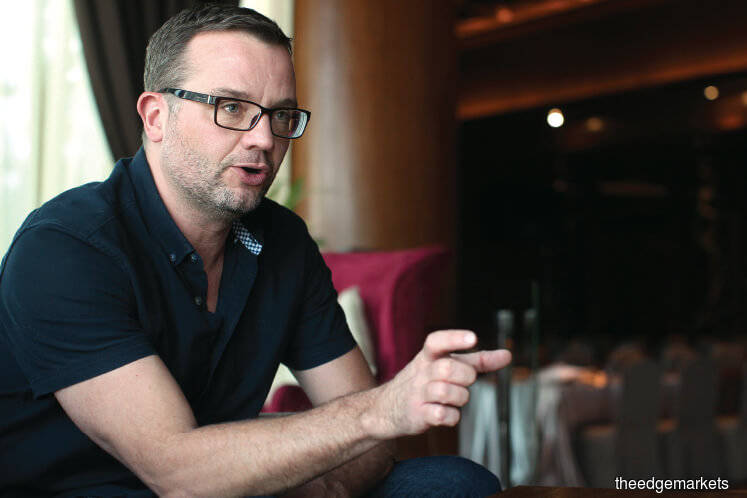 There are many people in Malaysia using smartphones and computers, churning out a lot of data on social media that businesses could tap into. > Gwilliam. (Photo by Mohd Izwan Mohd Nazam/The Edge)

Take some human creativity, throw in a dash of artificial intelligence (AI) and suddenly, you have a killer marketing campaign. Today, cutting-edge technologies are being used to attract more eyeballs and build brands more effectively, says Nigel Gwilliam, head of emerging technology at the Institute of Practitioners in Advertising (IPA).

Multinational corporations have been experimenting with AI to build their brands across the globe. Take the “Love at First Taste” marketing campaign of Unilever’s food and beverage company Knorr. The 178-year-old brand chose to engage youngsters by using IBM’s AI platform, Watson, to analyse the answers to a set of questions in determining the “flavour profile” of each respondent.

Then, a guy and a girl with the same flavour profile would be matched for a “food date”, where they could chat while feeding each other food they both enjoyed. The interactions were captured on camera and turned into a YouTube video, #LoveAtFirstTaste, which has garnered more than 60 million views since it was posted online in April 2016.

Gwilliam points out that this was a successful example of a company using AI to get its name out there, especially with the younger generation. “While AI played an important role in the project, human creativity was key,” he says.

Another successful example was the digital swear jar app launched by Comic Relief, a London-based charity organisation that aims to drive positive change through the power of entertainment, with the help of Grey Advertising.

The user downloads the app and signs up. He then initiates listening sessions that last up to 10 minutes where the app listens to his speech and tallies up the number of swear words used during that time. Based on the result, the user donates a small amount to Comic Relief via PayPal. The technology underpinning the app is a speech recognition technology powered by Google.

Gwilliam says the digital swear jar app kills two birds with one stone. It allows Comic Relief to raise funds in a creative way and it helps spread the word about the organisation across a wider audience.

Most SMEs do not even consider AI marketing because they have a misconception that it is very expensive. Gwilliam points out that this is not necessarily the case. “This is especially true in today’s world where we see more tech start-ups offering different AI solutions to SMEs at affordable prices.”

For instance, London-based, on-demand mattress company Eve Mattress partnered marketing and advertising agency Codec to improve brand awareness and boost sales. Codec utilises AI technology to grab information online and analyse the behaviour and interests of the company’s target audience. Then, it provides clients with insights into how they should advertise their products to their target audience.

Codec found that Eve Mattress’ target audience, who live in London, tend to commute a lot via the Tube, making the public rapid transit platforms an ideal place to promote its brand. Even more interesting is the finding that the target audience favours long-form written content rather than the short form widely favoured by advertisers today.

The agency also discovered that there was significant pent-up demand for content on leadership, self-improvement and spiritual wellness. So, Eve Mattress put up posters on train platforms that carried long-form written content. The campaign was so successful that its monthly revenue increased by 200% and its brand awareness by 300%, says Gwilliam. “More importantly, Codec was able to conduct A/B testing on the posters.”

What is A/B testing? “It means Codec first used the short-form written content and later switched it to long-form to gauge which form had more impact. The long-form content generated twice as many sales as the short-form one, proving that its initial findings were correct,” he says.

AI can even make the more common approaches used by SMEs, such as email marketing, more effective. Persado Pro Social and Phrasee are two UK-based start-ups that use AI to help SMEs generate the perfect words and phrases for emails.

“They utilise AI to analyse the content of the marketing email. Then, they generate the most attractive header that has the highest probability of attracting the readers’ attention. SMEs can try this out with a relatively small sum of money to see if it helps their businesses. These services, while not as sexy and interesting as what Unilever and Comic Relief have done, are practical and useful for SMEs to gain new insights,” says Gwilliam.

Local SMEs could try reaching out to these AI start-ups to explore new marketing and branding strategies, says Gwilliam. Malaysia is ready for this because it already has a high internet and smartphone penetration rate.

According to Statista, an online statistics and market research portal, the country’s smartphone penetration rate as a share of the population increased to 62.8% last year from 59.2% and 53.9% in 2016 and 2015 respectively. It means that six out of 10 people in Malaysia have a smartphone.

“There are many people in Malaysia using smartphones and computers, churning out a lot of data on social media that businesses could tap into. SMEs, especially those that target the younger urban dwellers, should try reaching out to these start-ups,” says Gwilliam.

Their main aim would be to see if they could acquire new clients and generate more sales in a more efficient manner using AI technology. “They can try to see if it can help lower costs in terms of marketing, creating brand awareness and client acquisition,” says Gwilliam.

In November last year, the association invited Gwilliam to Malaysia to give a talk on AI and marketing to SME owners, to show them how businesses in developed countries use this technology to market products and services more efficiently. “We are now working closely with IPA and those who want to know more about the topic can get in touch with us,” says Khairuddin.

The association plans to organise more events on AI and marketing for local SMEs. “It is a global trend and our SMEs shouldn’t miss out,” says Khairuddin.