MEDIA Chinese International Ltd (MCIL), which has been dominating the Chinese print media industry for close to a decade, is having a tough time sustaining its profitability.

Rumours are rife that Nanyang Siang Pau, which has been revamped into a business newspaper, will only be published three times a week; China Press will stop its morning edition paper while the regional bureaus of Guang Ming Daily will be closed for it to concentrate on the northern region.

Sources say Nanyang Siang Pau had an editors’ meeting last Monday to clarify the market rumours and to discuss some internal restructuring, such as the transfer of manpower from one publication to another.

MCIL, however, refuted the rumours when responding to queries from The Edge. The group says the four newspapers will maintain the status quo, while employee reallocation is still in the works.

Nevertheless, rumours about the restructuring and consolidation have turned the spotlight on the challenges faced by MCIL. Its net profit has fallen in the past two financial years. The group’s circulation and advertising expenditure (adex) are also in decline.

The group, which is 52.48% owned by Sarawak timber and media tycoon Tan Sri Tiong Hiew King, has a market share of 89% in the Chinese print media industry. Tiong is the group executive chairman of MCIL.

He bought into Nanyang Press Holdings Bhd in 2006, and later merged it with Ming Pao Enterprise Corp Ltd and Sin Chew Media Corp Bhd in 2008. The merger led to the formation of MCIL.

Nanyang Siang Pau, one of Malaysia’s oldest Chinese newspapers, saw a mass boycott when MCA bought Nanyang Press Holdings from Tan Sri Quek Leng Chan’s Hume Industries (M) Bhd in May 2001. The transaction was seen as controversial and there were concerns about the newspaper’s objectivity. Even though it is no longer under MCA, Nanyang Siang Pau has yet to regain its readership.

Competition should not be an issue for MCIL as it is a dominant player. As yet, other Chinese newspapers such as Oriental Daily News and Kwong Wah Daily are not giving the group a run for its money.

While it has been in operation for 10 years, Oriental Daily News — controlled by Sarawak-based KTS Group of Companies — has yet to break even. The group also owns See Hua Daily News, The Borneo Post and Utusan Borneo. The Lau family, owner of the KTS Group, is a fierce rival to the Tiong family. Both families hail from Sibu, Sarawak.

The lack of competition notwithstanding, Tiong’s media conglomerate is not doing well.

According to data from the Audit Bureau of Circulations and Nielsen Media Research, the circulation and adex of MCIL’s newspapers are in a downward trend, at a time when most English newspapers are still seeing a growth (see Table 1).

In contrast, the print circulation of The Star and The Sun Daily continue to grow, albeit by a small margin, while their adex were up by 7.7% and 5% respectively. New Straits Times also saw a growth in adex, despite seeing lower circulation.

“During GE13, social media became a popular source to receive news and ideology from Pakatan Rakyat. As a result, it indirectly weakened the credibility of the Chinese print media,” says Fung, a former assistant editor in a local Chinese newspaper. 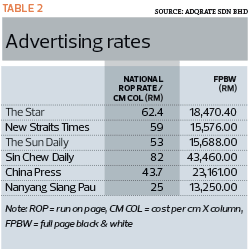 He points out that in the past few decades, classified advertisements had been a stable income stream for Chinese newspapers. However, online job search engines are now the more popular choice for companies and job seekers.

Since Tiong came into the picture some 10 years ago, it has always been his intention to reposition the four newspapers, but he has not been able to do so due to internal opposition.

Generally, MCIL and the vernacular newspapers face two major problems. Firstly, advertisers are not willing to pay a premium for advertisements in Chinese newspapers. Secondly, the Chinese press has yet to come up with a strong strategy to embrace the Internet.

Data compiled by adQrate Sdn Bhd shows that The Star, The Sun Daily and New Straits Times have higher run on page (ROP) rates than China Press and Nanyang Siang Pau. Sin Chew Daily is the only one that managed to have a high ROP rate.

A media industry observer tells The Edge that while the reader base of Chinese newspapers has not grown and their reading habits have changed, there is no business diversification plan in place for MCIL.

“This is a structural problem of MCIL. The idea of repositioning is there, but it has to conduct brand differentiation and its newspapers must not cannibalise each other. It has to package them and show the difference between the four publications,” he says.

As for the Chinese newspapers’ lower ROP rate, he remarks that most advertising agencies are run by English-speaking media planners, and there is a perception that English readers have higher incomes.

“But I don’t believe that. If a [non-English speaking] butcher can drive a Mercedes-Benz, that means he has purchasing power. So why give lower advertising rates?” he asks.