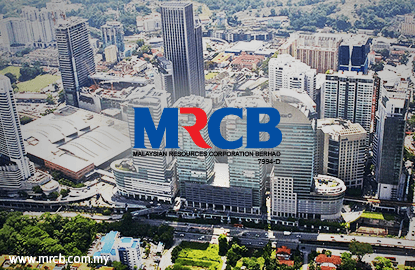 KUALA LUMPUR (Nov 3): Malaysian Resources Corp Bhd (MRCB) has dismissed concerns that the mega projects it is undertaking soon, particularly the rejuvenation of Bukit Jalil National Sports Complex, will strain its cash flow or spike its debt level of 1.12 times.

Its executive director Mohd Imran Mohamad Salim said firstly, MRCB intends to undertake a de-gearing exercise this year, but did not say what it would do to pare down MRCB's debt-to-equity level.

As the RM1.6 billion construction value of the project is pegged to the land that it will receive as compensation for the job, MRCB will also get the land parcels equivalent to the value of the jobs it has completed.

"Cash flow is not an issue (for MRCB to undertake the Bukit Jalil project). Furthermore, half of our gearing is pegged to our highway assets, and most of our borrowings are secured to assets," Imran told a press briefing on the regeneration of the Bukit Jalil National Sports Complex into the Kuala Lumpur Sports City today.

"Remove the highway out of the equation, and our gearing level will be on the same par as other property developers in town," he said.

As at June 30, MRCB's net borrowings stood at RM2.6 billion. With shareholder's fund of RM2.31 billion, its net gearing level was 1.12 times.

The Bukit Jalil National Sports Complex regeneration project is worth RM1.6 billion and will be divided into two phases. Phase 1's works are valued at RM499 million and the works will commence in January 2016. It will be completed in June 2017, to make way for the SEA Games 2017 to be hosted there.

Once the sporting event is over, the bulk of the mega project will be done — the most notable thing done would be to install the retractable roof on the Bukit Jalil National Stadium. The RM1.1 billion worth of works will be done in a span of 18 months, beginning June 2018.

The three parcels of lands MRCB set to get for the job's compensation is collectively 92.5 acres in size.

Imran said the land tracts, which are in the vicinity of the sports complex, were paid at a 2% premium to the current market value.