Much ado about nothing: Najib not calling document expert, after applying for him to testify 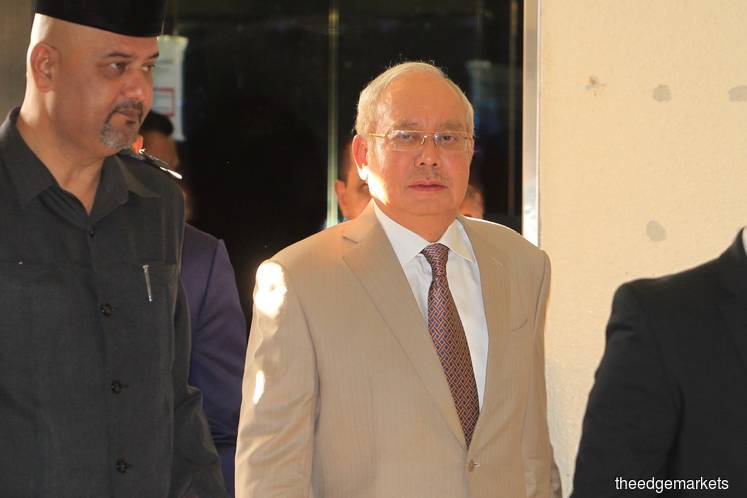 Last month, Najib’s defence, led by Tan Sri Shafee Abdullah, had made an application before Justice Mohd Nazlan Mohd Ghazali to allow a Dr Steven Strach from Australia to verify these documents which contain Najib’s signatures and to be called as an expert witness.

Najib, during the course of the trial, has maintained that he could not be sure if the signatures on the documents are his or are forgeries.

Appointed prosecutor Datuk V Sithambaram had informed Justice Mohd Nazlan today that the defence will not be calling Dr Steven to testify.

Shafee and his team had also confirmed this to the judge during proceedings today.

Shafee did not specify the reason for not using Dr Steven’s analysis and for putting him on the stand during proceedings but a letter sighted by theedgemarkets.com from Messrs Shafee and Co to Justice Mohd Nazlan’s chambers indicate that there was an issue with the expert’s appointment.

“As we have previously informed the court on 17/2/2020, an impasse has arisen relating to the terms of [Dr Strach's] appointment and as a result we are unable to proceed further with his appointment,” read the letter.

Dr Strach had been allowed by the court to examine the documents on Feb 11 and 12.

“To date we have not been provided with any report or findings by [Dr Strach], from his examination... apart from his preliminary report,” the letter went on to state.

“We therefore will not be calling Dr Steven to testify,” it said.

The letter then stated that they will address these issues when the defence stage of the case wraps up and each party has to provide submissions to the judge.

Among the documents in question are the company minutes of 1Malaysia Development Bhd — the then parent company of SRC — and a letter dated Dec 24, 2014, relating to transfer instructions by SRC.

Justice Mohd Nazlan, in his ruling, said an accused is entitled to procure and lead relevant evidence of his choice.

“Furthermore, it is settled law that even if a defence is not put to the prosecution witness, the court is still bound to consider the defence, however weak. Even if the basis for this application is an afterthought or an invention by the accused, it is not a valid reason to bar him from leading evidence in his defence,” he said.

Nevertheless, the judge said the weight to be given to the expert evidence — should it be tendered — including whether the credibility of the defence of the accused is adversely affected by any afterthought, is for the court to decide.

“The evidentiary value of the intended evidence [from Najib’s expert evidence] is an issue to be determined at the end of this case. This would ensure that the best evidence on the authenticity of the disputed documents is made available,” said Justice Mohd Nazlan.

“It is the duty of this court to ensure that the integrity of the trial process and the constitutional right of the accused to a fair trial are upheld at all times. I, therefore, allow the application.”

Najib is facing seven charges of abuse of power, criminal breach of trust and money laundering in relation to RM42 million from SRC.