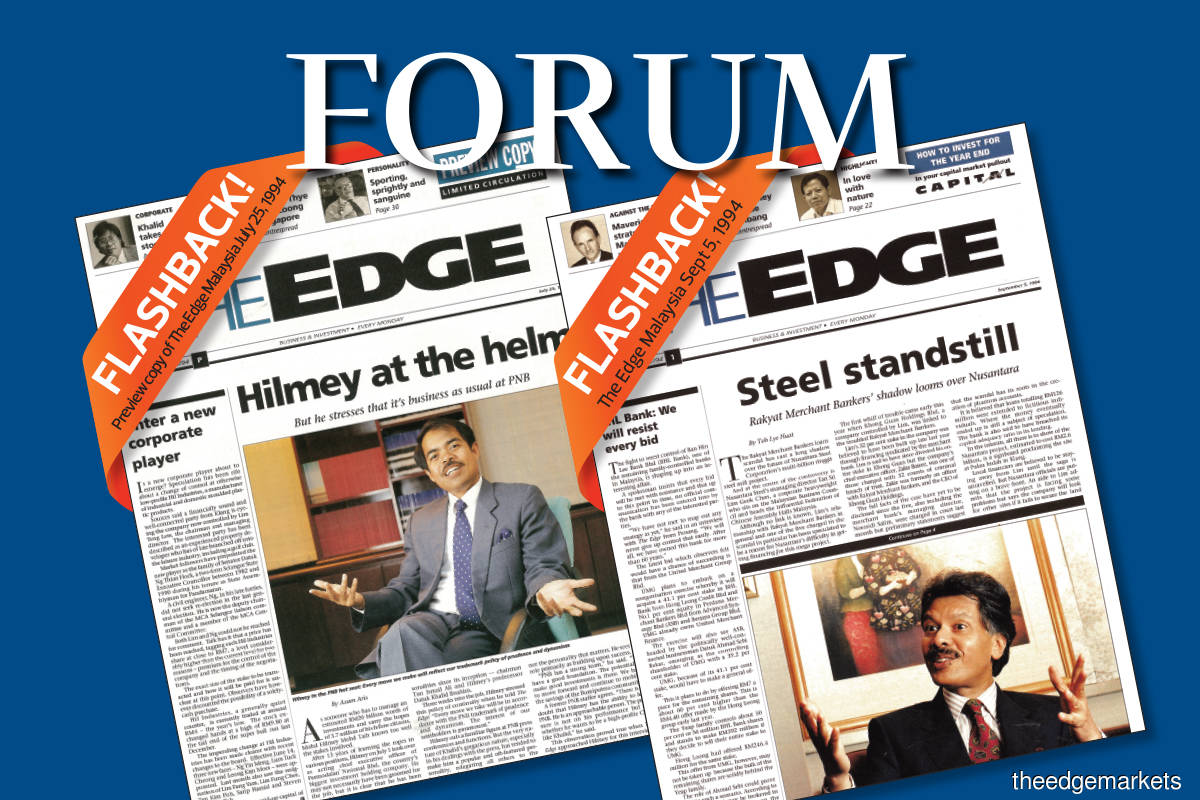 If my journalism career were a train ride, then my stint at The Edge was supposed to be just a stop at a station, with many more stations to come. But that station became the destination, and a home for the next 27 years.

The journey began in 1994. After spending about nine years with the New Straits Times (NST) Group, in the early months of that year, I saw the bickering in the newsroom of The Business Times (BT), then the country’s only financial daily, reach its zenith. Work was no longer fun.

One morning in April 1994, I put in my resignation with the thought of quitting journalism for good. By May, there were already some job offers outside journalism, two from industries I specialised in —

With the various options on the table, I was looking forward to enjoying my break, for I did not plan to work until August. That was until a phone call woke me up one morning in May.

Lady: Can I speak to Azam? My boss BK wants to speak to you.

Lady: He knows you.

Me: Hey Reverend! (At BT, most journalists didn’t go by initials but nicknames, and BK was the Reverend).

BK: What are you doing now? Heard that you are talking to TV3?

I paused and thought: BK had done his homework. I had not met him since he left BT  but he still knew that I had quit, managed to get my house phone number (mind you, those were the days when mobile phones were in their infancy) and was spot on in that I had had discussions with TV3.

Me: Not really lah … still looking for a job.

BK: We are starting a new newspaper. It’s a financial weekly.

Me: Who is the editor?

BK: Chan Tham Seng (another BT colleague) ... Can we talk?

BK and Tham Seng were both good and resourceful journalists and my seniors at BT and this prompted me to listen to their proposition. When we met for lunch at a Moghul restaurant in Section 14, Petaling Jaya, they were joined by Lim Siang Jin — another old hand in journalism and the NST group.

Showing me the mock-up, BK said The Edge would be a niche publication concentrating on breaking stories, analyses, commentaries and in-depth reporting. Run by journalists, it would be a journalists’ newspaper.

The mock-up, with big pictures and graphics, was refreshing. But what was more interesting was that it was a weekly. The thought that I would have a lot of free time compared with working for a deadline-driven daily did cross my mind (and how wrong I was).

Next, I asked, “Who are the shareholders?”

These were really big names. Tong was a fast-rising banker, Wan Azmi had close links with Umno business czar Tun Daim Zainuddin, Effendi had strong corporate and political connections in Sarawak, and Mohd Noor, also known as Noor Azam, was then chairman of TV3 and Datuk Keramat Holdings, and had been political secretary to prime minister Tun Dr Mahathir Mohamad.

After telling my wife about the meeting, she said she had figured that I would remain a journalist, but asked why I didn’t choose the offer that came with the highest pay.

The journalist in me told her, “I have confidence that The Edge, with the right editorial team and shareholders, will work out and be successful. I don’t want to walk in the streets of Kuala Lumpur a few years later and look at a good product on the newsstands and tell myself I should have been part of the pioneering team.”

Before The Edge hit the streets in September 1994, we brought out a preview issue dated July 25 — it was not a mock-up but carried actual stories — and presented it to the media fraternity, advertisers and invited guests at a soft launch in KL Hilton.

The cover story was an exclusive interview with the newly appointed CEO of Permodalan Nasional Bhd, Hilmey Taib, with the headline, “Hilmey at the helm”. Only three weeks into the chieftain’s job, it was his first press interview.

In an editorial meeting at one of The Edge’s rivals, the editor had this to say, “We were beaten to this story by a newspaper that has not even been launched!”

After The Edge had been on the newsstands for a few months, I went to my favourite magazine haunt, Yakin Book Store in Lucky Garden, Bangsar, and asked the mamak owner and newspaper vendor what he thought of The Edge and whether the weekly could sell. He was crude in his reply though. “It is expensive and at most, this type of new publication can last only a year or so.”

Yet, here we are today ... still getting those exclusives, interviewing CEO after CEO, continuing to break stories and provide in-depth reporting. The Edge has since chronicled and analysed Malaysia’s economic development, the 1997/98 Asian financial crisis, the 2008 global financial crisis and now, the Covid-19 pandemic — events that have shaped the world economy and Malaysia’s future.

And in between crises, The Edge was at the forefront of reporting on and dissecting Malaysia’s biggest financial scandal — 1MDB — which implicated former prime minister Datuk Seri Najib Razak. It was a political hot potato that local newspapers shunned.

The Edge is not only the best at stock market, corporate and economic news but over the years, its property, technology, personal finance, entrepreneurship and lifestyle pullouts have become top-notch products and favourites of readers and industries too.

For me, it has been a challenging and worthwhile train ride and I am confident that with each generation of editors-in-chief, editors and writers, The Edge will remain at the forefront of business news reporting in the country for many years to come.

That is because we got the formula right from day one — the formula of having a journalist as managing director or CEO and someone who knows the operation of a newspaper and media company. While a positive bottom line is crucial in business, only a working journalist who is a CEO or MD can really understand how passionate journalists can be.

This right formula also includes hiring some of the best journalists in the market to be part of the editorial team and training fresh graduates to become the best and most competent among their peers.

And now, one preview and 1,398 issues later, the train ride has stopped, without me actually leaving the station. During this period, I had the privilege of working with the best chairman, group CEO and publisher, managing directors, editors-in-chief, managing editors, executive editors, senior and section editors, and group of business journalists in town. They are equally supported by a remarkable and talented set of graphic design artists, sub-editors and production and TV teams.

Until we cross paths again, my salam to all.