My Say: An ugly revelation but something good emerges 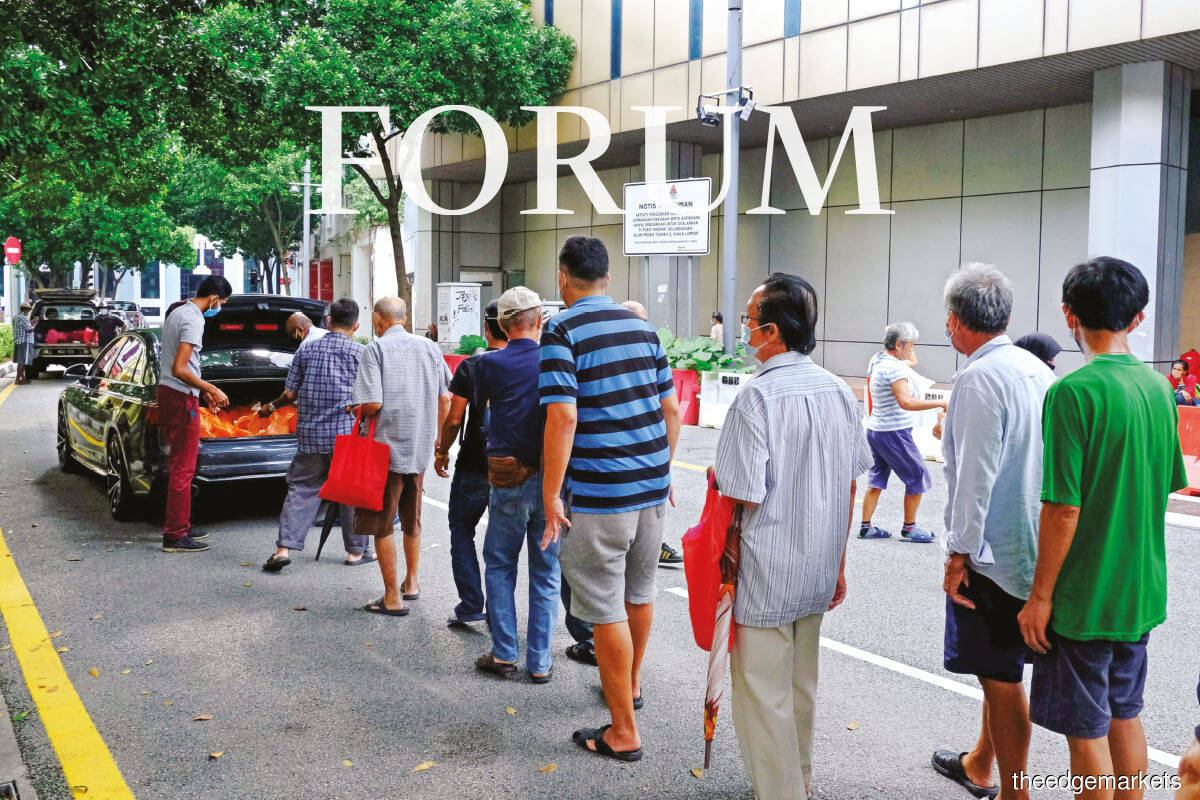 People stand in line to receive food donations near Central Market in Kuala Lumpur. The pandemic showed the resiliency and resourcefulness of Malaysians, over 90% of whom were born after Merdeka. (Photo by Bloomberg)

This year is the golden anniversary of the New Economic Policy (NEP), that landmark policy whose raison d’être and overriding objective was to foster national unity in the aftermath of the 1969 riots and whose timeline was to have ended in 1990. It did, but its spirit remains till today, not in its original form but in a mutated form instead.

Any policy using governmental authority to benefit the powerless can end up benefiting the powerful instead if governance is not sufficiently robust. The restless spirit of the NEP, caught in purgatory of sorts and manipulated by anyone who wanted to, has had that effect.

Last year was also the target year for ­Vision 2020, the policy that formally replaced the NEP, a rightly more ambitious and comprehensive policy to achieve not just a united society but a mature one, with mature institutions and a developed economy.

It was to have carved out Malaysia’s position in the global community of nations, but it too could not truly exorcise the unresolved spirit of the NEP. We became less united, more fractious and incentive structures got distorted everywhere. There was adequate financial capital, but social capital — in developing excellence required to be competitive and develop accordingly — was wanting.

The potentially lucrative but highly distortionary economic rent of a resource-based economy was strengthened with the discovery of oil and gas, and this, combined with the potentially rent-rich development spending on capital projects, saw government finances weakening as it expanded.

Public governance — on the allocation decisions of public resources — is always weaker in economies that are extractive, unlike when public finances are raised mainly from taxes. The many taxpayers are more exacting than the few in government who decide how monies are expended.

A narrow tax base and a narrow taxpayer base are sources of weakness in governance as well as a source of instability from a revenue perspective. There was only a brief stint when the federal budget was in surplus in the years leading up to the Asian financial crisis in 1998. And the more the government spent on development projects, the more future operating budgets became. And when the budget became constrained, especially after the 2008 financial crisis, more imaginative off-budget means were used that generated even more future operating expenditures. The revenue base was never addressed, and debts, including contingent ones, piled up, with no reserves at all.

Alas, the Covid-19 virus arrived and what a revelation it has been. The cracks and wobbliness in the foundations of the economy and society were already there but cracks deepened into crevasses and some wobbly wheels came off. The pandemic did not just remove the fat in the system and reduce the margin for error, it exposed the bare essentials. What a picture it is.

The first revelation was in politics, perhaps a reflection of the degree of dysfunctionality. The pride in a peaceful transition of power after 60 years was replaced by disappointment as the onset of Covid-19 saw an unelected government coming into power as the elected one crumbled — it was united in ridding the country of a corrupt government but mired in the dynamics of change characterised by narrower interests.

Thus, the government of the day, formed as it were by betrayals, had to be held together by the use of — largely diminished — state power, and an Emergency was declared. It was a tenuous political equilibrium — not the best and brightest the nation could muster to manage the crisis. But the fact that a better equilibrium could not be obtained revealed a failure of the political market. Basically, the breakdown of the old equilibrium in politics is akin to the breaking-up of party boundaries, and those boundaries have not solidified.

Very quickly, the government discovered the deplorable state of government finances — or came to appreciate the horror the ousted government felt looking at the same numbers: shrinking revenues, growing operating expenditures and a pile of debt from two decades of living beyond our means.

On top of that, there were these 1Malaysia Development Bhd debts, whose coupon payments alone are more than what it takes to pay the unhappy contract doctors. All these development expenditures from the past, off-budget commitments and various so-called private finance initiatives have expanded the operating budget to the point that whatever revenues are collected are exhausted.

The handling of the health crisis was poor and it exacted high human and economic costs, which called for much more fiscal spending — and which a politically weak government staring at such bad fiscal numbers was tentative to do. There was no big thinking, thus the reform opportunities a major crisis presented were missed.

I hope younger Malaysians read the Second Malaysia Plan document that contained the NEP when it was launched and compare it to recent such documents. The differences in the quality of the documents are stark and while the NEP mutated later, when it was formulated, it was well thought out and implemented and changed the national landscape. We are losing that opportunity to redefine our national landscape again through this crisis.

However, we are witnessing the emergence and mobilisation of the third sector in the country — civil society organisations and the rakyat — doing its part to fill the vacuum, fuelled by empathy and ideals and supported by private resources. It should be noted that this is taking place when household income is declining and unemployment is rising.

It is one of the most heart-warming things to see amid some of the most heart-wrenching scenes of death and despair. Unlike the politics that is so coloured by identity — of race and religion — this third sector is united at the human level under the #kitajagakita slogan to help fellow Malaysians, and in the process, expose the hypocrisy of politics.

The way forward for a better Malaysia requires hard decisions and, therefore, ample political capital, which the current government is not endowed with if it chooses to rule in a partisan manner. It will fail, as it already has, and will only worsen the dynamics eventually.

The Malay-Muslim narrative that it colours itself with is the mutated spirit of the NEP, the one that failed Vision 2020, and whose weaknesses and shortcomings the Covid-19 virus revealed. One slice of Malaysia, it is not even the best possible slice and cannot solve the total Malaysian problem. Persisting to do so destroys the collective.

We have to move on from this bad state of affairs but it will mean the very people who are to do this will have to sacrifice their interests. That is why it is difficult to do. It also requires the acknowledgement that the country has not totally failed and that the basic construct of Malaysia does not need to change.

The New Malaysia narrative of May 2018 is also wrong, in my view. The present is always the departure point for any reforms, and that departure point is by definition a big mess and complicated. However, to brush off the last 60 years as all bad and wrong is equally bad and wrong.

The pandemic showed the resiliency and resourcefulness of Malaysians, over 90% of whom were born after Merdeka. Yes, the education system needs to be improved but it managed to produce enough youth with ideals and the courage to fight for their convictions. To go up against the power of the state and call for change and pay a personal price in doing so. And to organise themselves and help fellow Malaysians who need help.

But most of all, I am encouraged by the level of honesty, the integrity, and the lack of expediency and hypocrisy that so coloured the stilted world of Malaysia’s elites of all stripes: political, religious and economic. These youth were fed some very toxic narratives but their human spirit rose above the ugliness and pettiness of politics and partisan narrow interests.

They showed that weak national institutions are not a reflection of bad people; weak institutions are the result of weak leadership and poor governance. What we need are uncompromisingly good leaders and good governance to give us a head start in solving our enormous problems. That is why we need the Dewan Rakyat sitting, for in spite of the sometimes raucous environment there, we can judge and evaluate those we elected as representatives. The rest is up to us.