My Say: What could we be missing about China? 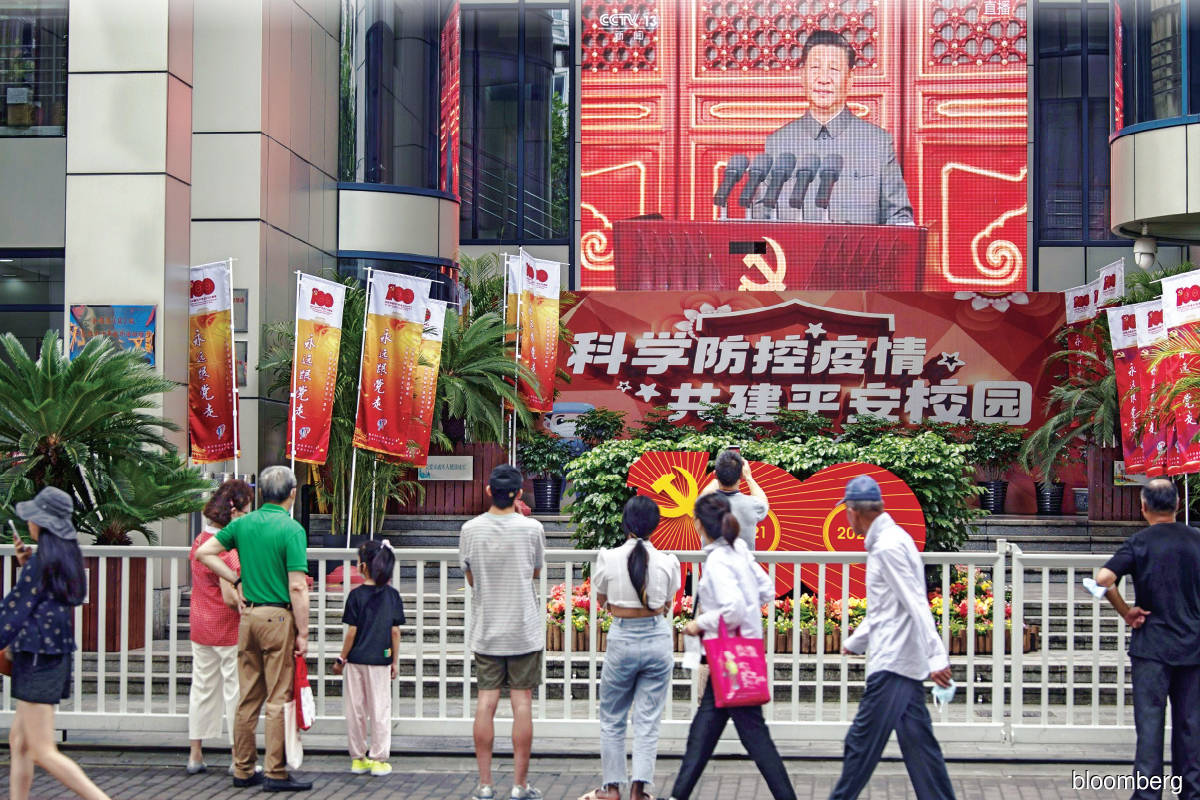 In the commemoration of the 100th anniversary of the CCP on July 1, Xi took a prominent position

Recent market commentaries on China have focused on a few concerns. One is whether economic growth is slowing more than expected, since that could bring a premature end to the bounceback from the Covid-19 downturn — and that would be bad for global recovery. Another worry has been whether the Chinese authorities can get the right balance between maintaining a decent growth rate and ensuring financial stability, the fear being that they may prematurely tighten policy and cause a slowdown in the process.

These are indeed pertinent worries, but we are relatively sanguine about these issues. Economic growth appears to be on a good track while Beijing’s policymakers have been quite adept at juggling potentially conflicting objectives. But there are other trends bubbling under, which could end up as nasty surprises. Since China is run as a top-down system, politics is key. Thus, the machinations in advance of the Chinese Communist Party’s (CCP) next congress in 2022 are a possible source of downward surprises. But there is a second trend that also bears watching: new socioeconomic trends are emerging that are poorly understood and these could produce unexpected economic outcomes, as we argue below.

• First, investment in the manufacturing sector is gaining momentum, accelerating sharply to a 17.8% year-on-year pace in June. If this rate is sustained, it would mark a sizeable improvement on the 3.1% in 2019, before the pandemic hit the economy. The factors that slowed investment in this sector are dissipating. The lagged hit to corporate cash flows from the pandemic seems to be over while the pressure on margins from rising commodity input costs appears to have peaked, judging from recent producer price data. Most encouragingly, the private sector, which accounts for most of manufacturing investment, is showing an improved appetite for capital spending.

• Second, export demand continues to feed through strongly to China: China is still the pre-eminent downstream economy and therefore the primary beneficiary of recovering demand for manufactured products. As the base effects wear off, China’s export growth will no longer be at the sizzling levels seen in recent months, but global demand will still provide a sizeable uplift to the country’s manufacturing sector. The huge amount of excess savings in the US and Europe is likely to be unwound over time, helping to support demand for Chinese exports.

• Third, infrastructure investment is also likely to gain strength in the second half of this year. The recent pickup in local government special bond issuance points to higher spending by this level of government in the coming months.

• Finally, policymakers are keen to ensure steady growth and will intervene if needed to support the economy should downside risks appear on the horizon. This was seen in last week’s cut in banks’ reserve requirements as well as in the many schemes providing targeted support to favoured sectors. The central bank has developed a diverse set of tools to help it achieve its multiple objectives of good growth as well as financial stability. The People’s Bank of China and related agencies employ a range of macro-prudential or administrative interventions to discourage risky behaviour in the financial sector while also using liquidity measures to support economic growth.

Overall then, we think the conventional risks to the economy are relatively well managed and are unlikely to throw up an unpleasant surprise. The surprises are likely to come from elsewhere.

Could politics be one source of unpleasant surprises?

After nine years in power, Xi Jinping reigns supreme. He has consolidated power energetically, purging his direct opponents, intimidating potential rivals and sidelining younger leaders who might have risen to a position where they could have challenged him. Except for the Politburo Standing Committee, which he has largely neutered, his loyalists dominate all the key organs of the CCP. He has also cleverly taken credit for the successes of the regime and therefore projected himself to the Chinese people as one of China’s most successful leaders ever. In the media, China’s emergence as a major power that stands up to the US and even tells it off, the extraordinary economic progress of recent years, the clean-up of corruption since 2012, and the quelling of the Covid pandemic are all articulated as great triumphs of his administration. In the commemoration of the 100th anniversary of the CCP on July 1, Xi took a prominent position while the other leaders were left on the sidelines, leaving no doubt as to who is in charge.

Nevertheless, Xi could still face difficulties as he works to use the 2022 party congress to complete his dominance over the party. As we flagged in our column in May (Issue 1368), Xi has made many enemies and faces resistance from within the system. The factions associated with his predecessors, Jiang Zemin and Hu Jintao, may have been pushed aside but they still retain some clout. Some of their family members reportedly had stakes in big tech companies such as Didi Chuxing that have been the target of the government’s recent crackdown. Private entrepreneurs and their backers in the party would also have been rattled by Xi’s control-oriented approach to private enterprise. There are many influential groups who would love to see the back of Xi.

Xi’s opponents know that they are in no position to oust him. Neither are they likely to try and prevent him from securing a third term as party leader or state president, even though Xi’s hanging on to power goes against the grain of the system designed by Deng Xiaoping. Rather, their aim in the run-up to the 2022 congress would be to retain sufficient influence in key party organs so that they can protect themselves and their families against any harsh actions Xi might want to take against them and to prevent him from holding unchecked power. In practical terms, this means that there will be intense infighting over appointments to the politburo and central committee as well as over senior positions in government. The posts of leaders allied to his rivals, such as Vice-Premier Hu Chunhua, will be hotly contested.

The period leading up to the party congress in late 2022 will therefore be tense. Any misstep by Xi, whether in domestic economic policy or in the geopolitical tussle with the US, could be used against him.

With the economy staging an impressive rebound and with China so successfully defeating the pandemic, one would have thought consumer confidence would be high. Instead, retail sales growth in the first half of 2021 expanded at an anaemic 4.4%, well below the 8% growth in 2019. In other words, China’s households are saving a lot more than before. Indeed their savings rate in 2Q2021 was a whopping 11% above the pre-pandemic level.

Consumer caution has been evident for some time. Chinese households at all income levels tend to save more than their international peers. There are some standard explanations for this high savings rate:

• First, the social safety net in China remains limited, forcing citizens to save more. For example, public-sector spending on healthcare and pensions amounted to a miniscule 5.4% and 3.7% respectively of GDP, much lower than the Organisation for Economic and Cooperative Development average. In other words, ordinary folks have to save more to defray risks from retirement inadequacy, health complications and unemployment. Furthermore, the existing social safety net does not adequately cover the 270 million or so migrants who work in urban areas without full residency rights.

• Second, the disproportionate spending on housing may be depressing consumption. After all, people have to set aside large sums for a down payment and have to divert spending to mortgage payments.

• Third, as the population ages, the working-age population is increasing savings to prepare for retirement. This factor, of course, is exacerbated by the inadequacies in public expenditure on pensions and healthcare described above.

However, these conventional explanations for a high savings rate do not explain why there has been such a large rise in the savings rate since the pandemic. We believe the pandemic may have inflicted a further shock on the psychology of the average Chinese household, prompting a fundamental change in their saving and consumption behaviour. We suspect that this consumer caution could also be related to a changing mood among Chinese urbanites of late, a rising disquiet, especially among the young but increasingly in all walks of life, with the various pressures of capitalist life: high housing prices, intense competition for jobs, extremely long working hours, and the educational and corporate rat race.

Two phrases have sprung up within Chinese social media of late, “involution” and “tang ping” or “lying flat” in recent months. The former is approximately understood as the opposite of evolution, and is used by popular vloggers and commentators to describe the deleterious impact on Chinese society from these pressures, and the latter a way to cope — by rejecting altogether the rat race and eschewing consumerism. The government has more recently started to censor posts on “lying flat”, suggesting that it is worried about the ­socioeconomic implications of such a trend.

• First, wary consumers means slower overall economic growth. It makes economic performance overly dependent on investment and exports, such that weaknesses in either could prompt a swift deceleration in economic activity.

• Second, President Xi’s “dual circulation” strategy of economic growth would be at risk — dual circulation refers to the importance of both domestic demand as well as external demand. If consumer spending disappoints, then one of the two key engines of growth is misfiring.

• Third, an elevated savings rate would translate into a higher Chinese current account surplus since the current account balance is simply the difference between savings and investment in an economy. Given the way China’s trade works, that would almost certainly mean a widening US current account deficit. And that could well mean another source of tension between the US and China.

In short, the Chinese economy appears to be in relatively rosy health right now. If there will be downward surprises that throw the economy off track, they are likely to be caused by political ructions of some kind or by the socioeconomic factors that seem to be depressing consumers and which are not fully understood by policymakers.