Najib won’t sue WSJ in US, can’t get higher damages there, says lawyer 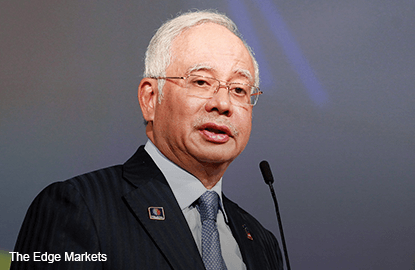 KUALA LUMPUR (Nov 2): Datuk Seri Najib Razak will not file a defamation suit against The Wall Street Journal (WSJ) in the United States because he is not a well known personality in that country in order to obtain higher damages, his lawyer said.

Counsel Datuk Firoz Hussein Ahmad Jamaluddin, a member of the prime minister's legal team, said Najib not only wanted to vindicate himself but also wanted the court to award damages for injuring his reputation.

"He (Najib) is not likely to get higher damages in the US because he is not well known there," he told reporters today.

The lawyer said this when asked why the prime minister was not filing the suit outside Malaysia against the publisher.

Instead, Najib's legal team is insisting that WSJ state whether it will rely on a US law that protects American companies from court rulings outside US jurisdiction.

Firoz said Najib was also entitled to damages, just as opposition leaders like Datuk Seri Anwar Ibrahim and Lim Guan Eng who had been awarded high monetary compensation against Utusan Melayu (Malaysia) after it was found liable for defaming them.

WSJ in July had reported the flow of RM2.6 billion into Najib's personal bank accounts through entities linked to 1Malaysia Development Bhd (1MDB), citing documents sourced from government investigators. It also published an opinion piece on the matter.

Najib has denied taking 1MDB funds for personal use but has not accounted for the money.

The funds, a large portion of which was deposited ahead of the general election in May 2013, were later described as a political donation from the Middle East by the Malaysian Anti-Corruption Commission (MACC).

Hafarizam said he had written to the publisher's lawyers for clarification whether the RM2.6 billion had come from 1MDB, but said there had been no satisfactory explanation.

The lawyer said he later wrote to the publisher's lawyer in Singapore to inquire whether it would rely on American law, the Speech Act, to deny Najib from enforcing the judgment obtained in Malaysia.

He said WSJ's lawyer in Singapore had refused to disclose anything further for strategic reasons.

"We definitely want to file a suit but must get it right or else will be thrown out due to technicality.

"Also, we also do not want to get a paper judgment but cannot enforce it in the US ," Hafarizam added.

Najib gave instructions to sue WSJ in early August, after MACC said the money came from donors, and not from 1MDB.

In late July, WSJ refused to respond to a request from Najib's lawyers for a clarification as to whether the paper's report on the money in Najib's accounts meant that they were accusing Najib of misappropriation.

The publisher instead said it stood by the report dated July 2, and a subsequent opinion piece published on July 6, which said it was clear and based on documents sourced from Malaysian investigators.