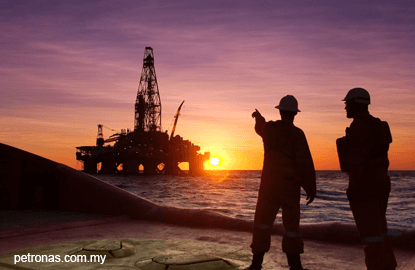 KUALA LUMPUR (March 9): Oil and gas-related (O&G) counters fell in in the morning session today, as oil prices fell below US$56 on Wednesday, after an industry report pointed to a large rise in crude inventories in the U.S.

Reuters reported overnight that the U.S. crude inventories rose by a more-than-forecast 11.6 million barrels last week, data from industry group the American Petroleum Institute (API) showed on Tuesday, ahead of the government's supply report due later on Wednesday.

“The oil prices would probably go down until it reaches US$50/barrel,” said Lim, adding that the trend is just temporary.

Concurring with Lim, MIDF research analyst Aaron Tan mentioned that the trend will take about a few days or up to a week to normalise.

“The past few days, O&G counters have been strong, coupled with the FBM KLCI index which has exceeded 1,700 points; there has been some profit-taking,” Tan added.

Meanwhile, a remisier with a local bank said: "Crude oil price dropped yesterday, I think because of the uncertainty in OPEC and none OPEC oil-producing countries to agree on reduction/ maintaining the oil production cut.”