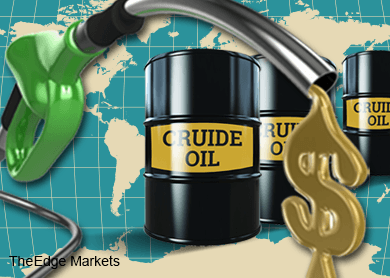 SINGAPORE (Dec 8): Oil prices fell by more than a dollar on Monday to near their lowest levels since 2009 after Morgan Stanley cut its price forecast for Brent, saying oversupply will likely peak next year with OPEC deciding not to cut output.

"Without OPEC intervention, markets risk becoming unbalanced, with peak oversupply likely in the second quarter of 2015," Morgan Stanley said in a report.

Top oil exporter Saudi Arabia blocked calls from poorer members of the Organization of the Petroleum Exporting Countries to reduce production at the group's meeting on Nov. 27, fueling a further slide in oil prices which have lost more than 40 percent since June.

"With OPEC on the sidelines, oil prices face their greatest threat since 2009, but we expect a volatile 2015 rather than a one-way trade," Morgan Stanley said in a report.

Last week, Saudi Arabia cut its monthly prices for crude it sells to the United States and Asia, a move that analysts say show it is stepping up its battle for market share.

Investors are also eyeing trade data from China during the day with further evidence of economic weakness in the world's No. 2 oil consumer likely to pile more pressure on prices.

Reflecting lacklustre domestic demand, China's import growth probably eased to 3.8 percent in November from a year earlier, after a 4.6 percent expansion in October, according to a Reuters poll of economists. Export growth likely cooled to 8.1 percent from 11.6 percent in October.