Oil prices to remain elevated in 4Q, but US$100/bbl may be too bullish 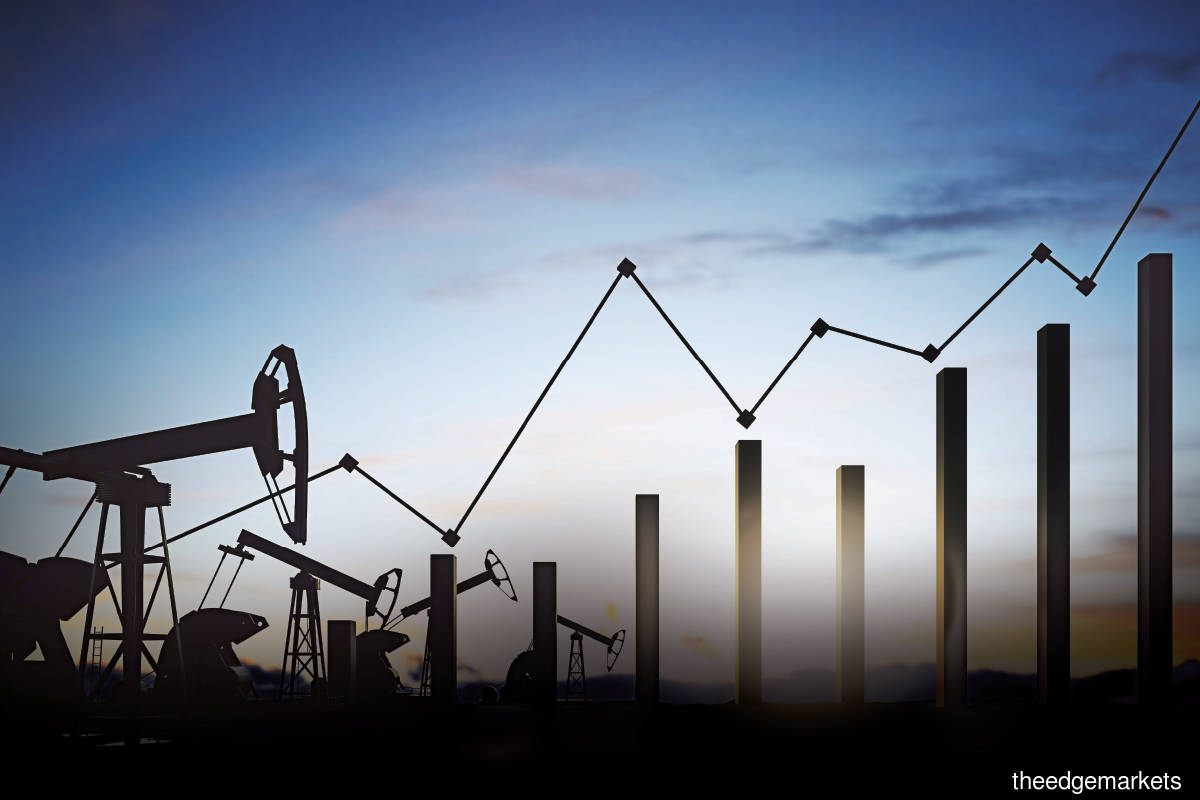 A global energy crunch has fuelled speculation that crude oil may breach US$100 a barrel, which would be a first since 2014.

The current oil price rally has been driven by a switch from gas to oil due to high gas prices, a jump in crude consumption over a cold winter, and improved aviation demand as borders reopen.

“If all these factors come together, oil prices could spike and lead to a second round of inflationary pressures around the world,” Bank of America cautioned in a recent note.

Local analysts appear less optimistic that US$100 a barrel oil is in sight.

“In the short term, it is possible to hit the US$90 mark. There is difficulty in putting back the supply into the market after a long period of restrictions and underinvestment in the oil and gas (O&G) sector. I don’t think the surge in oil prices is sustainable in the long term,” an O&G analyst who declined to be named tells The Edge.

As at 6pm last Thursday, Brent crude oil was trading at US$79.93 a barrel. It hit a peak of US$83.13 last Monday after the Organization of the Petroleum Exporting Countries, Russia and their allies (Opec+) stuck to a planned output increase rather than raising it higher.

Reuters reported that Opec+ had agreed to adhere to its July pact to boost output by 400,000 barrels per day (bpd) every month until at least April 2022, which would phase out 5.8 million bpd of existing production cuts.

According to Opec’s September report, oil demand was resilient in 3Q2021, supported by rising mobility and travelling activities. Nonetheless, the increased risk of Covid-19 cases, primarily fuelled by the Delta variant, is clouding oil demand prospects going into the final quarter of the year, resulting in downward adjustments to 4Q2021 estimates.

“As a result, 2H2021 oil demand has been adjusted slightly lower, partially delaying the oil demand recovery into 1H2022. Global oil demand in 2021 is now estimated to average 96.7 million bpd. In 2022, oil demand is expected to robustly grow by around 4.2 million bpd, some 900,000 bpd higher than last month’s assessment,” says the report.

In its “Short-Term Energy Outlook” released last month, the US Energy Information Administration (EIA) forecast Brent crude oil to remain near current price levels for the remainder of 2021, averaging US$71 a barrel in 4Q2021. “In 2022, we expect that growth in production from Opec+, US tight oil and other non-Opec countries will outpace slowing growth in global oil consumption and contribute to Brent prices declining to an annual average of US$66 a barrel.”

An O&G analyst with a non-bank-backed research house is also of the view that US$100 a barrel may be too ambitious notwithstanding the rising demand. “Yes, it will at least be at the current level or even higher in 4Q due to the winter season, coupled with the energy crisis in the US, Europe and China. There may be more inventory restocking activities. Also, an increase of 400,000 bpd each month is not enough to cater for the current high demand,” she says.

“But I don’t think oil prices will touch US$100 within the next six months, unless oil production remains low with more purchases from China to maintain its economic growth.”

The analyst’s average Brent crude oil price for 2021 is US$75 a barrel, compared with US$68 year to date.

Steven Chan, an O&G analyst at Kenanga Research, warns of more downside risk to oil prices over the long term owing to ample spare capacity from Opec and the US. “In the short term, better-than-expected demand will boost oil prices. The power shortage situation will last at least three to six months because there is no immediate or short-term fix to this problem.”

However, in the long term, he expects some of this spare capacity to return to the market, though it may take some time for oil producers to ramp up their production after underinvestment because of the Covid-19 pandemic.

An analyst with a bank-backed research house says the effect of the switch from gas to oil is being keenly watched, as market demand looks to be the major factor in affecting the direction for oil prices. “Opec is controlling the supply, with some members struggling to increase their production. Saudi Arabia is not keen to increase its production.

“Meanwhile, US shale oil producers are not increasing their production that much. They have decided to retain more money as dividends and spend less on capital expenditure after the last oil price crash ... until the energy crunch is resolved. If not, O&G prices will remain high.”

Assuming that oil activities pick up next year, he expects local O&G firms to post better financial results in 2022. That said, it still very much depends on Petroliam Nasional Bhd’s (Petronas) business plans. His top picks for the sector are Dialog Group Bhd and Yinson Holdings Bhd.

“It is time for investors to look at Dialog again. From a long-term perspective, the stock is undervalued. There is a lot of potential for its Pengerang facility, but it has not been able to develop it due to travel restrictions,” he says.

“For Yinson, strong contract flows is one of the catalysts as more projects will be in the pipeline.”

O&G stocks charted a positive trajectory last week, with Yinson among the top gainers, fuelled partly by Maybank Investment Bank Research’s bullish view of the floating production storage and offloading (FPSO) operator. The bank has revised upward its target price to RM10.90 from RM6.65, which implies an upside of 78.7% to Yinson’s closing price of RM6.10 last Thursday.

Owing to the high correlation with oil prices, downstream players such as Petronas Chemicals Group Bhd and Lotte Chemical Titan Holding Bhd will benefit from the current oil price environment, says Chan. Over the past two weeks, PetChem’s share price increased 7% while Lotte Chemical saw a smaller gain of 1.6%.

He adds that local O&G services and equipment providers are also perceived to be beneficiaries of the reopening theme. “Since last year, they have faced difficulty in job execution. But the reopening of the economy will help them resume activities.”

Recently, Boston Consulting Group cautioned that the coming boom could be over quite quickly — 18 months at the most. And it could be the world’s last. “The oil market system continues to be more flexible, with both supply and demand more elastic than in the past, making booms both less likely to occur and lower in terms of the peak price during the boom,” the consulting firm explained.

“Energy transitions are also underway as policymakers and companies seek to curb emissions and tackle climate change, slowing the demand growth rate. And higher prices, even if they last for short periods of time, will spur further investment in alternative fuels and will accelerate any move away from fossil fuels.”

However, the analyst with the bank-backed research house believes that developments in the O&G sector could change rapidly. “One oil price boom can be followed by another. In the past few years, we have seen two oil price crashes, followed by a sharp recovery.”

He says the key event is Opec’s decision on oil production as well as Iran’s negotiations with the US, which has imposed sanctions on the former’s oil sales.

For at least the past two decades, oil prices have been in a volatile mode, triggered by a slew of events in the global financial markets.

The year 2008 could not have better underscored the extremes in volatility. Oil prices topped US$140 a barrel in the middle of that year, just before the global economy tipped into a recession caused by the US subprime crisis. Subsequently, oil prices bottomed out at US$36 a barrel in December that year.

After a breather, oil prices recovered sharply and trended north again between 2011 and 2014, reaching about US$115 a barrel in mid-2014 before taking a huge tumble.

The most recent oil rout occurred in March 2020, after an alliance between Opec and Russia collapsed acrimoniously, coupled with the global economic slowdown and lacklustre demand brought about by the Covid-19 outbreak.