AS oil prices remain under pressure, Petroliam Nasional Bhd (Petronas) says it will be reviewing the feasibility of some projects and won’t undertake projects at all cost.

In an email reply, its president and CEO Tan Sri Shamsul Azhar Abbas tells The Edge that the national oil firm will not be making drastic changes in its strategy and plans despite the fact that oil prices are declining — at least in the short term.

“For now, our current projects and strategy remain on track as planned. We have always ensured robustness in all our projects to survive a low price scenario.”

Shamsul says the decline in oil prices has long been anticipated given the excess supply of crude and slower global economic growth. He expects the situation to prevail over the next few years.

He adds that Petronas is always prudent in its plans and has already taken into account low oil prices.

“However, I believe all the oil and gas (O&G) companies will have a review of their strategy and investment plans given the current low oil price, and expect lower profitability and cash flow,” he says.

According to Shamsul, as with any O&G company, Petronas’ revenue and profit will be directly impacted by lower oil prices.

In such market conditions, the company will be managing and monitoring its cost closely and will not hesitate to drop contracts that are not economically feasible.

“It is important for the industry to understand that as per the ongoing practice, Petronas regularly conducts portfolio reviews to assess project feasibility,” says Shamsul. 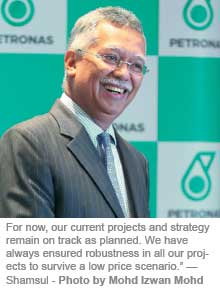 He highlights that Petronas will not undertake projects that do not meet its economic threshold, adding that its project economics are not only driven by oil prices but also the cost imposed by service providers.

“It is crucial that costs reflect the prevailing situation and are not inflated to ensure the viability of the project as a whole for the benefit of all involved.”

If the project does not meet Petronas’ economic threshold, Shamsul says “the impact of not proceeding with projects will be felt across the industry, particularly the oil services sector”.

Petronas and the service providers need to work together to weather the low oil price environment.

“There must be give and take in the industry and the burden should not be passed to just one side,” says an industry source.

“If service providers still want to remain firm with their rates despite the lower oil price and dampened market, then Petronas will most likely delay the projects,” he adds.

Meanwhile, an executive from a local service provider says, “The industry must also tighten its belt to meet its own economic threshold.

“We have been through this cycle before. The only way to survive is to continuously optimise our operations and our cost to achieve targeted returns.”

As the handing out of projects will be kept on a tight rein, local service providers, which have been too bullish and optimistic about potential project rollouts, will need to reconsider their investment plans.

Despite Shamsul’s warning earlier this year that the O&G industry is expected to face a slowdown, service providers in the local O&G market have been beefing up their assets in the hope of grabbing a share of the perceived lucrative pie.

Year to date, several jack-up rigs and offshore support vessels have entered the market. In fact, another seven new builds are expected to hit the seas between this year and next.

Not only is there an oversupply of vessels and rigs in the market today, there are also more new players entering the O&G industry, especially small-cap firms listed on Bursa Malaysia.

In fact, Shamsul points out that the low oil price environment is timely and good. “It will weed out competitive surprises apart from high-cost operators. In the end, only the most resilient companies will survive the shake-out.”

According to its 2013 annual report, Petronas recorded net profit of RM65.6 billion on the back of RM317.3 billion in revenue. It registered a cash flow of RM91 billion from its operations.

The bulk of its revenue came from petroleum products which contributed about 35%, crude oil and condensates (21%) and liquefied natural gas (21%). The rest came from natural and sales gas, petrochemicals, maritime and logistics as well as property.

Being the national oil company, Petronas contributed about RM27 billion last year to the federal government in the form of dividends.

Moving forward, Petronas has stated that it does not expect to see the same profitability and numbers in next quarter’s results due to the sluggish market.

Are others prepared for a declining oil price?

On a wider scale, Goldman Sachs Global Investment Research said in a note last week that most global listed oil companies are not prepared for a low oil price environment.

It also points out that some European oil companies will be under pressure to reduce their 2015 to 2016 budgets if the oil price remains below US$100 per barrel.

Global oil prices have been on a downward trend after hitting a peak of US$115 per barrel in June. Since then, the benchmark crude oil price has declined more than 20% to US$86 per barrel last Friday.

This was evident by the drop in BP plc’s third quarter earnings, making it the first global integrated oil company to report weaker results due to declining oil prices.

“On our estimates, in order to achieve a 4.5% free cash flow yield by 2018 (the long-term average for the sector), capital expenditure would need to fall 13% or 20% respectively in a US$90 or US$80 per barrel oil price environment,” it adds.