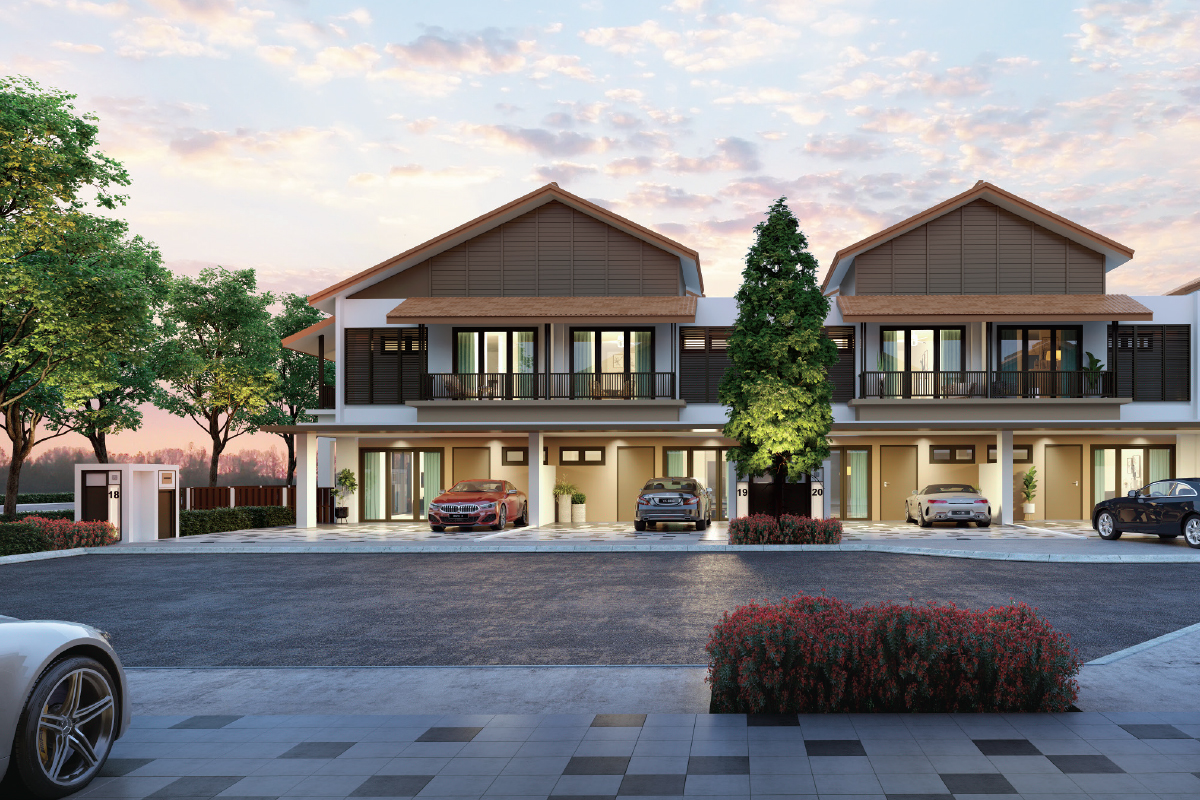 Situated on a 129.93-acre leasehold tract in Bandar Baru Salak Tinggi in Sepang, Setia Warisan Tropika has a gross development value of about RM900 million.

Developed by S P Setia Bhd, the exclusive, gated-and-guarded township will have four phases comprising 694 double-storey link homes, 257 apartment units, 406 townhouses under the Rumah SelangorKu scheme and a commercial component. The township is due for completion in 2024.

“As we pass through the main entrance, which has a sense of grandeur, we will be greeted by the main clubhouse and then, the tropical-themed homes. The living and dining areas of these homes will open up to waterways, plenty of surrounding greenery and Zen-like gardens. So far, we have started construction work on the clubhouse and the first phase,” says Noor Lida, describing the concept and progress of the development.

“Our buyers are a good mix of owner-occupiers and investors in the middle- to upper-middle-income groups, especially those from Sepang and the Kuala Lumpur city centre [which make up 32% of the buyers so far]. We are targeting young families and upgraders. We are truly proud of what we have created here, and we are confident the upcoming phases will perform well.” Noor Lida addresses the current challenges. “With the Covid-19 pandemic and Movement Control Order, we have had to change our initial plans and launch events a number of times. Nevertheless, we have found ways to adapt, and to do most of our marketing online via virtual meetings, our Setia on-the-go app, and so on. The Home Ownership Campaign has helped tremendously.”

The group aims to capitalise on the township’s potential with the launch of the second phase. “The feedback [on our first phase] has been excellent, thus we decided to go ahead with our

According to Noor Lida, Adenia will offer a flexi layout, with a unique semi-detached-style façade design. “The units will have larger windows, with ample natural lighting and ventilation,” she notes.

“The second phase is our focus for FY2021. Nonetheless, if the launch performs well and achieves about 80% take up, we may consider launching our third phase before the end of the year.”

Meanwhile, a one-acre clubhouse that will be within walking distance of the units will be built in the township. The facilities will include a half-Olympic-size swimming pool, basketball and futsal courts, and an events hall that can host up to 500 people.

“We will have the Setia community app for homeowners, so the amenities will be accessible. For example, they will be able to book the clubhouse via the app, and so on,” says Noor Lida.

The clubhouse, as well as some of the water fountains, will be partly powered by solar energy. Solar panels will be installed to reduce the maintenance cost and electricity consumption. “The maintenance cost will be as low as RM300 per month,” she says.

In terms of the accessibility,  Setia Warisan Tropika is connected to various roads, highways and interchanges such as Jalan Putrajaya-Dengkil, the North-South Expressway Central Link (Elite), the North-South Expressway (Plus), Persiaran Negeri — Salak Tinggi/Nilai and Maju Expressway II (still under construction). “The Salak Tinggi ERL station is within walking distance of Setia Warisan Tropika. There is also an interchange via Serenia City,” says Noor Lida.

“One can’t go wrong investing in terrace-type houses in the Klang Valley. Although it is not the best time in the market, values still tend to appreciate between 20% and 30%. For our previous launch in this township, our homebuyers have profited by between RM50,000 and RM100,000 from their investment,” she says.

Noor Lida describes the group’s vision for the township. “Ultimately, we hope that Setia Warisan Tropika will flourish and will be a precious jewel for Setia. As we continue to strengthen the commercial aspect of the township, we hope to create a place that is meaningful for residents, and also for the areas of Bandar Baru Salak Tinggi and Kota Warisan.”