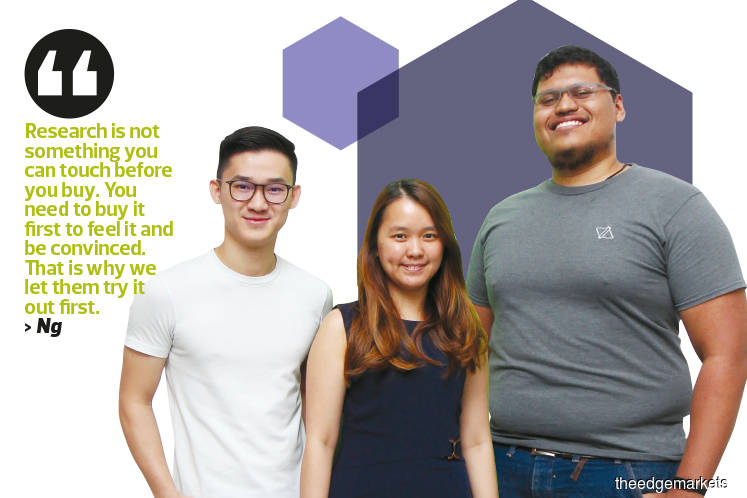 In the current hypercompetitive business environment, market research is very important to provide enterprises with detailed insights into their customers’ preferences, pain points and buying patterns. However, most companies in Malaysia do not conduct market research as it is viewed as expensive and time-consuming, says Vase.ai co-founder and CEO Julie Ng.

“There is a perception among local companies that market research costs a fortune and that only those with five or six figures to spend would be able to afford it. It is also common for them to think that it would take months to complete. Since consumers of the current age change their behaviours constantly, companies think it would be a waste to spend so much on something that provides outdated information,” she adds.

Recognising that this could be a key area for disruption, Ng and her co-founders, chief operating officer Zhen Ng and chief technology officer Asyrique Thevendran, launched validation-as-a-service platform Vase.ai. The self-service platform, which provides local enterprises with insights into consumers, markets, brands, products and advertisements on a one-off or monthly subscription basis.

Unlike other companies purveying market insights, which could take months to complete a single piece of research, Vase.ai is able to do it in less than 24 hours, says Asyrique. Typically, these companies collect data through traditional methods such as paper surveys and actual focus groups. Vase.ai’s research is done online.

After businesses have defined their audiences and quotas, Vase.ai collects survey responses and turns the collected data into actionable insights. The results are delivered to clients via intuitive dashboards. For online focus groups, clients receive the results in the form of Excel transcripts. Emphasising speed and accuracy, the company collects data on the opinions and behaviours of more than 700,000 respondents across Malaysia and Singapore.

Thus far, the company has run more than 300 projects for clients, including large brands such as Digi, KFC, Spritzer, Universal Music Group and AXA Affin.

Although the trio can say they have made market research cheaper, faster and better for clients, the journey has not been easy. They met at AngelHack in 2015. The hackathon required teams of designers and programmers to produce an application, or at least a working prototype, within 54 hours.

“At the time, Asyrique posted a financial technology idea and asked people to join him. Zhen and I saw that post. We tinkered with the idea for a while before realising that a company had done it before. So, we had to pivot fast,” says Ng.

Coming from different backgrounds, it was tough to be on the same page at the beginning. Ng came from Penang, where she was helping to run her family business, Zhen had just graduated from secondary school and Asyrique was on a summer break from a university in New York, where he was studying computer science and economics.

“Our discussions were going nowhere. Finally, we decided to collect feedback from the participants to test our ideas. While doing that, we realised that no one else was doing what we did. No one was bouncing their ideas off the other participants. We thought that it was very odd. Why were they not validating their ideas, instead of going straight into designing and coding?” says Ng.

“When we asked them, they either said they did not think it was important or they just did not know how to do it. Based on that information, we decided to go ahead with the idea of validation-as-a-service.”

The Vase.ai team did not win the hackathon. However, they did meet a mentor who acknowledged their idea and even connected them with one of the biggest banks in Malaysia for a pitching opportunity. That was when the team knew that there was definitely a need for the product they wanted to build.

The trio did not jump into development straightaway though. Ng went back to Penang, Asyrique resumed his studies and Zhen started a full-time job at a local start-up. While they worked on their idea every now and then, nothing really materialised.

“I got a bit frustrated and told them that if we wanted to progress, we had to commit and do it full-time. Let’s set a timeline for us to come together as a team and try to develop the idea into a full-fledged product. They agreed. So, we gave ourselves 10 months. I quit my job, Julie took a break from her family business and Asyrique took a gap semester,” says Zhen.

In February 2016, the team launched a website so that people could sign up and become survey respondents in exchange for rewards. They managed to collect 60,000 respondents within six months. The trio were also accepted into Digi Accelerate, the telecommunications company’s accelerator programme, which took them to Bangkok for three months.

Before leaving for Bangkok, they met up with prospective clients — start-ups and small businesses — to find out whether they would pay for Vase.ai’s product. “It did not go as planned. We found that the smaller companies would rather spend money on marketing than on market research,” says Ng.

During the accelerator programme, the trio realised that they needed to change their target sector. Instead of start-ups, they decided to sell to larger enterprises that would benefit from cheaper market research. “Digi opened the door for us by being one of our first key clients. They reaffirmed our thesis that corporates should be our target market,” she says.

However, it was difficult for them to convince the larger companies to try out Vase.ai’s product, says Ng. The company is often compared with market research giants like Nielsen and Kantar. Fortunately, not many companies were doing digital research at the time, so Vase.ai’s product stood out.

“Research is not something you can touch before you buy. You need to buy it first to feel it and be convinced. That is why we let them try it out first,” she says.

“Once they are convinced, there is a good chance that they will be a recurring client. True enough, in our second year, we had a lot of recurring corporate clients. Then, it got easier to convince others that we had a good product.”

The first year of business was predictably tough. The founders neither hired employees nor took a salary. All the required capital for running the business came out of their own pockets.

In fact, they were so frugal that they lived in their office. “We were incredibly lean. We rented a soho in Sunway City. We slept upstairs and worked downstairs,” says Asyrique.

“Although we did eventually receive some funding from Thai angel investors, we did not get any big venture money. It was a product of circumstances. We knew it would be very hard to get people to invest in three young entrepreneurs trying to sell a business-to-business product. So, we just did not try.”

Today, the trio can finally consider raising a round of funding. The company has healthy financials, a strong team and it has demonstrated the ability to not only sustain the business but also thrive.

“It is quite common for start-ups to get funding before they even come out with a solid idea. We took a different route. We went through the school of hard knocks to try to do everything by ourselves using as little capital as possible. Looking back, we are proud that we managed to survive and grow organically,” says Zhen.

Vase.ai’s current focus is developing its latest product, Every. He explains that unlike its other products, which provide market research, Every allows companies to ask questions and get answers within hours to assist them in making more informed decisions. “One key difference is that we also build a service layer on top of it. We bring in research experts from our company to help guide their research,” he says.

“For example, our research experts will let them know if they are not asking the right questions or if they are targeting the wrong audience. They will also suggest alternatives. When the results are in, our artificial intelligence (AI) and human experts will analyse the data to find correlations between the different data points.”

Ng says, “An example of how companies can use Every is when marketers cannot decide between two types of packaging and want consumers to be the tiebreaker. If the results come back and are 50:50, our research experts and the AI will essentially drill down to the segments. For instance, single people without children would prefer design A while parents would prefer design B. This is how we help our clients make better decisions.”

Going forward, the company plans to expand to countries such as Indonesia and Thailand. However, the main focus is still improving its current offerings and building a strong client portfolio, says Ng.