Profile: An industry veteran’s reflection on the markets 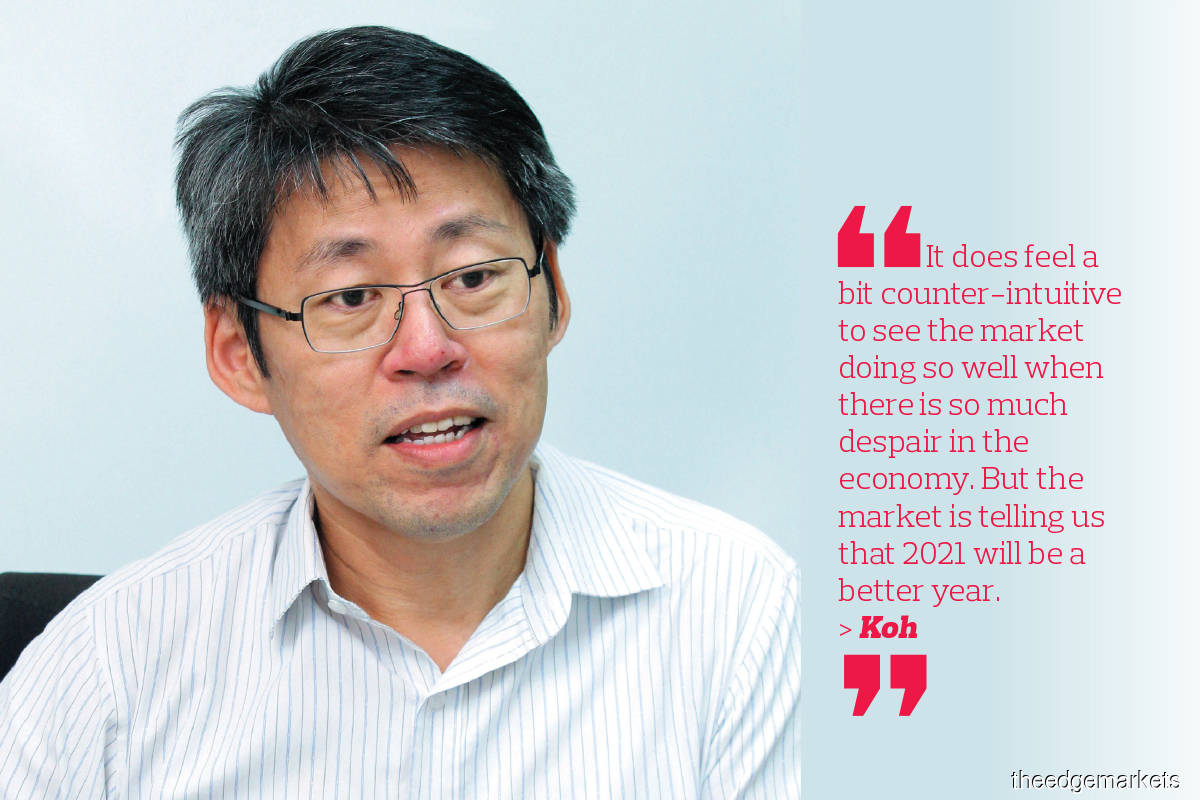 It has been a busy and challenging year for Koh Huat Soon, head of research at Kenanga Investment Bank Bhd. The pandemic introduced a lot of uncertainty into the market and after the Movement Control Order (MCO) was announced, he and his team had to deal with a constant flow of new developments.

“My job is to report the impact of policies on the market. There were no less than four stimulus announcements in that period of time, starting with the one made by former prime minister Tun Dr Mahathir Mohamad. There was also Bank Negara Malaysia’s announcement on the moratorium and the extensions of the MCO,” says Koh, who assumed his latest role in June last year.

“On top of that, we had to respond to our concerned clients. We arranged many conference calls between corporates [and our clients]. In almost every call, the questions were about how much of the corporate’s capacity had been curbed due to the MCO, what their order books were like and whether they had laid off employees.”

He also had to change the outlook for the market, which had been set at the beginning of the year. “In January, I made a call that the target for the FBM KLCI at the end of the year would be 1,700 points. After Chinese New Year, the pandemic started to impact the market, so we brought the target down to 1,463 points and later, back up to 1,531 points. I think the revision margins this time were much larger than what we were used to in the past,” he says.

While the scale of this pandemic is unprecedented, it is not the first time Koh has had to manage a crisis in his professional career, which spans almost three decades. He joined the financial industry as an analyst in 1992 and witnessed the five-year bull run in the local market until the Asian financial crisis (AFC) struck in 1997. A year after the AFC, he joined the asset management industry and remained there until last year, when he left Pacific Mutual Fund Bhd to join Kenanga IB.

“The problem we face today is of a different nature [compared with the AFC]. The pandemic has caused a sudden collapse in business activity. Hopefully, this situation will not last too long as there will be cash flow implications for businesses,” says Koh.

The problems in the 1990s were mainly caused by emerging markets and corporations that had too much US dollar-denominated debt, he adds.

Koh is nevertheless bullish about the prospects for 2021. While the performance of global financial markets does not fully reflect the economic fundamentals at the moment, the current rally is a reflection of an expected recovery next year, he says.

“It does feel a bit counter-intuitive to see the market doing so well when there is so much despair in the economy. But the market is telling us that 2021 will be a better year. We are expecting earnings per share (EPS) to contract about 28% this year. But next year, we are anticipating EPS to rebound off a low base at about 33%,” says Koh, whose current year-end target for the FBM KLCI is 1,593 points.

An earnings recovery in the banking industry is a factor contributing to his optimism. Banks, which make up the largest sector of the FBM KLCI by weightage, have had a bad year due to the loan moratorium and squeezed net interest margins (NIMs) as a result of lower interest rates, he observes.

“We are not saying things will be hunky-dory next year. There may be more provisions as impairments become clearer. But we think interest rates are already as low as they can be and there won’t be any more cuts, so the NIM squeeze will end,” says Koh.

“Earnings contraction and modification losses will be less. Just the absence of negative factors will be enough to contribute to a better year. If there is a recovery on the pandemic front, we will see loans growth return.”

Rubber glove counters are expected to continue supporting the market, he adds. Regardless of whether a vaccine materialises, the demand for rubber gloves will still be there due to a higher vigilance of cleanliness and hygiene.

“If you are working in a hospital, you would still want to be careful and wear protective gear. Some may not trust the vaccine and choose not to be vaccinated, thus ensuring the continued demand for gloves,” says Koh.

What strategy to adopt?

At this time, investors could adopt a barbell investment strategy in anticipation of a potential recovery, says Koh. “Yields are very precious this year, so investors should look for yield stocks that are good defensive plays such as utilities and some banks. Park your money in these counters that can give you income. But don’t forget the cyclical stocks and those that demonstrate secular growth, like technology companies.”

The tech counters may experience some impairment due to the pandemic, but operations are returning to normal now, he observes. The development of 5G technology and work-from-home trends are also growth factors.

“We saw a boom in demand for disk drives and power chips. As the pandemic eases, investors should be adopting a more aggressive posture and move into cyclicals,” says Koh.

Meanwhile, the more aggressive investor could look at leisure, travel and brewery stocks, he suggests. “Some retail plays such as Padini Holdings Bhd have lower footfall due to the MCO, but the business will normalise in time. We like these kinds of plays because they are oversold. But when the pandemic turns, [the demand for their services] will recover.”

Koh also likes the rubber glove and construction sectors. The view on the latter is driven by the belief that the government will pump-prime the economy by spending on infrastructure.

Within the tech sector, he likes Malaysian Pacific Industries Bhd, D&O Green Technologies Bhd and JHM Consolidation Bhd. “D&O is involved in the electronics supply chain for cars [by manufacturing semiconductor products]. We are seeing a recovery in car sales in China, which is one of the first big economies to come out of this crisis. That could drive the sales of D&O,” he says.

The rubber glove companies that he prefers are Top Glove Bhd and Hartalega Bhd. “Hartalega’s share price has less volatility and it has not gone up as much as Top Glove or Supermax [Corp Bhd]. Operationally, the company is the most efficient and technologically ahead of its peers,” says Koh.

As for banks, he prefers RHB Bank Bhd because “it is well capitalised and can absorb further impairments comfortably. The prospects for dividends are probably the best for them”.

Local tech companies could be beneficiaries of the US-China trade war as companies in China and the US are hoping to diversify their supply chains. Semiconductor players in Malaysia could stand to benefit from this trend, says Koh.

Many of these listed tech companies are small and mid-cap stocks, some of which are listed on the LEAP or ACE Market. “One of our top picks is JHM, which is listed on the ACE Market. It provides semiconductor chips for charging stations of electric vehicles. It also makes parts for the aerospace industry, as well as packaging for 5G infrastructure. It is growing rapidly,” he says.

Another company that Koh likes is MMIS Bhd, which is listed on the LEAP Market. It makes precision engineering parts for the semiconductor industry and counts ViTrox Technologies Bhd among its major clients.

“I think MMIS is one of the beneficiaries of the supply chain relocation from China. American companies want an alternative supply due to the trade war, and this is where Malaysian technology companies could benefit. I think that theme will play out in the long run,” he says.

The increased demand will pose a steep learning curve for tech players as they will be forced to improve their capabilities, says Koh. “Exciting developments like more semiconductor components in cars and 5G, which requires more dense radio frequency content in chips, will pressure tech suppliers to improve rapidly.”

A phenomenon seen in both the 1997/98 Asian financial crisis and the current one is the elevated retail participation in markets.

For one, retail investors are now less likely to participate in speculative trading. This could be due to the shorter settlement period of T+2 days, compared with the much longer T+5 days back then, he notes.

“Back then, if you bought a stock on Monday, you didn’t have to pay cash until five days later, so you had a whole week to contra trade. A lot of retail punters bought stocks early in the week and sold them before the week was over,” says Koh.

“This emboldened punters to take more positions. It could be dangerous because the market could pull back very quickly and if it did, they would have found themselves unable to pay [the difference between the higher buying price and the lower selling price].

“Some of my friends got burnt quite badly. I’m not an expert in trading, but I know that taking too many positions without sufficient capital is a big risk.”

Retail investors were drawn to the markets in the 1990s as it was an exciting period of growth for Malaysia. Large infrastructure projects were launched and government-owned corporations such as Telekom Malaysia Bhd and Petronas Gas Bhd were listed.

This time around, retail participation is being driven by liquidity in the market due to lower interest rates and the hunt for yield, says Koh. “Our sister company, Rakuten Trade, saw about 60,000 new account openings this year, bringing the total number of accounts to 100,000 since it was launched three years ago. Most of these new accounts were opened during the MCO period. People spent a lot of time at home, so they could study the market.”

The digitalisation of the stockbroking industry is also enabling retail participation. “The rise of retail activity can be attributed to millennials. This group of people is very comfortable with online trading, and it just so happens that trading facilities are going through digitalisation now. The convenience of trading and lower brokerage fees could have helped increase retail participation,” he says.

This trend is likely to continue as more stockbroking firms, including Kenanga IB, improve their digital capabilities to attract retail investors. “Rakuten Trade was the first completely online equities broker in Malaysia. We’ve also been given a robo-advisor licence by the Securities Commission Malaysia and we plan to launch the platform next year. Earlier this year, we embarked on the development of an algo-trading platform. We also started to share stock recommendations generated by our in-house design trading strategies team via our public Telegram channel. All these are good for promoting retail activity,” says Koh.

Can the increased retail participation trend last? He believes that short of a systemic shock, the markets will continue to rise and attract retail investors. Meanwhile, investors nowadays are more financially savvy due to greater access to information.

“In the 1990s, when I conducted seminars for retail investors, they would ask me frivolous questions like, ‘Should I buy or sell this?’ Nowadays, they ask questions related to fundamentals, balance sheet strength and prospects for earnings growth. I like these kinds of rigorous and sensible questions,” says Koh.

“I’m getting the sense that we have come a long way since the 1990s and we are seeing more retail investors make good decisions.”