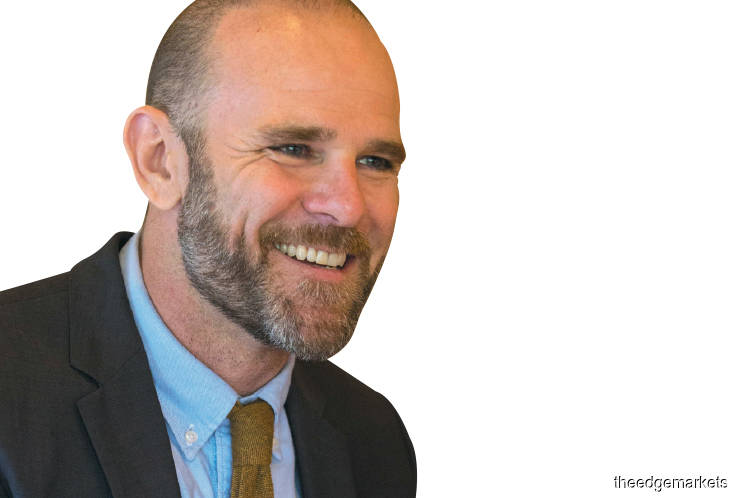 Obviously, governments have the role of setting curriculums and standards and running education systems. But business has an important responsibility to be partners in that and ensure industry relevance in terms of what is taught and how it is taught. > Raper

IBM approaches corporate citizenship a little differently. Instead of throwing money at a problem, it uses a combination of its own technology and the skills and capabilities of its people to handle it.

David Raper, IBM’s leader for corporate citizenship and corporate affairs in Asia-Pacific and Greater China, says his job is to target social and community issues and deal with them using the best the company has to offer.

In Malaysia, IBM’s efforts in corporate citizenship have been fairly recent. But it is already making inroads in mental health and education.

IBM has teamed up with the Malaysian Mental Health Association (MMHA) to reach out via social media to people who may be facing mental health issues. “One in three Malaysians struggles with an aspect of mental illness and one of the big challenges is actually reaching, addressing, communicating and engaging with them,” says Raper, who was in Kuala Lumpur recently.

The tech giant started working with MMHA at the end of last year. “First of all, we analysed the problem. Then, we helped them strategise their social media outreach to see how they could be more effective in reaching those with a mental illness, particularly young people,” he says.

Tiffany Marie Mervin, IBM Malaysia’s corporate citizenship and corporate affairs programme director elaborates, “What we did was basically social media analytics. We mine publicly available data to find out what young people are doing, or at least young people with mental health issues ... what they are doing on the internet and whether it is effective to use social media to reach out to them.”

Since then, MMHA has seen a more than 50% increase in its level of engagement. “Things such as shares, likes, comments … those are the sort of things in social media that show that you have an engaged audience,” says Raper.

The higher level of engagement allows the mental health association to reach out to and communicate with more people and ultimately connect them with the services they need. “That is a practical example of what we do because it hits on a very important issue for society, which is mental health. The other thing is, our work with MMHA brings IBM’s capabilities — in this case, our people and analytic abilities to solve a problem — to the fore,” says Raper.

Raper says what Malaysia — and probably every other country in the world — is experiencing is a rapidly changing economy and jobs landscape. “So, the massive increase in data and consequent rise in skills related to technology are creating a raft of new opportunities, both in terms of the economic growth of societies and opportunities for individuals.”

In many places, Malaysia included, their education system is not moving quickly enough to match the changes in society and the economy. “Thus, IBM’s programmes in the education and skills space try to do three things. First, we look at policy leadership — to advocate for and get the right policies so that education systems are set up for students to succeed,” says Raper.

“Second, we look at the practical implementation of that. IBM has programmes for primary, secondary and university students and teachers. And third, we are training our staff so that they continue to develop.”

On the policy side of things, IBM is talking about the rise of what it calls “new collar jobs”. “What we are seeing is the rapid growth in jobs and industries around data, technology and the Fourth Industrial Revolution. These are jobs where the skills really matter, not necessarily what qualifications you have,” says Raper.

These jobs, he adds, provide opportunities to individuals but are hard for employers to fill. They can provide a pathway to good middle-class jobs as the economy changes with the rise of technology, artificial intelligence and big data.

For example, jobs such as digital and user experience designers. “These are people who design websites in terms of how you and I would navigate them and make them easy to use. These jobs exist, not just in tech firms but every sort of company, whether you are a travel agency or a mental health association or even IBM. Every company increasingly needs these types of skills to succeed,” says Raper.

That is not to say interfere with the curriculum. “Obviously, governments have the role of setting curriculums and standards and running education systems. But business has an important responsibility to be partners in that and ensure industry relevance in terms of what is taught and how it is taught,” says Raper.

IBM’s programme that touches specifically on curriculum is Teachers TryScience. In March last year, the company piloted the programme with 300 teachers from Universiti Pendidikan Sultan Idris to raise the proficiency in science, technology, engineering and mathematics (STEM) among lower secondary school students. “Teachers TryScience is an online resource of lesson plans and pedagogic advice for teachers to move from a rote learning approach to a more curiosity and experimental-based approach,” says Raper.

He points out that this is really important if students are to acquire the necessary problem-solving STEM skills. Earlier this year, the programme was expanded to include special education teachers, providing them with lesson plans for 30,000 special needs students in Malaysian schools.

Mervin says IBM started by engaging with lower secondary school teachers. “We teach them how to use design-based teaching methods — how to teach creativity and innovation — and aligning that with the whole curriculum.”

The reception to the pilot programme, however, was a little lukewarm. The teachers realised that they could get the lesson plans off the internet and did not want to learn new teaching skills because they considered this an additional burden.

The special education teachers were a different kettle of fish. They did not have access to lesson plans online and were very excited about learning skills that would allow their students to experience scientific concepts first hand.

“We found there was a 60% improvement in the students’ achievement, so that actually indicated a success. Another one would be the change in the teachers themselves. We had about 40 teachers who innovated on their own lessons.”

Raper says IBM has developed an artificial intelligence-based teaching tool called Teacher Advisor with Watson, which focuses on teaching primary school maths. “It curates content on lesson plans, projects and pedagogical advice on how to teach primary school maths — things like fractions, areas and other very practical stuff. We use Watson technology to make it very easy, providing natural language searches for teachers. And over time, it is individually responsive so that the machine learns how to teach teachers what they need to know and continually provide them with better content.”

“Their feedback was, ‘Well, if it could get us good quality vetted content quickly, it would be a real help’ (because teachers are very time poor). So, we built it and iterated it with them. We released it in the US in June and will have a global release in September.

“We are seeing quite a good take-up. The reason for that is because it was not developed in a black box, as in, ‘Here’s a hammer. Do you have a nail?’ It was more like, ‘What’s your problem?’ and ‘Let’s build something to fix it.’”

Mervin says IBM’s corporate citizenship division plans to carry out many projects in Malaysia over the next few years. Recently, it held an IBM Watson Maker workshop in Cyberjaya with Malaysia Digital Economy Corporation (MDEC).

“We got IBM volunteers to partner groups of students from a suburban school to build a laser-printed robot and power it with Watson services. So, you can speak to the robot, have it move, change its lights and stuff like that …  a tangible way for young people to interact with artificial or augmented intelligence,” says Mervin.

Next February, IBM will deploy its Corporate Service Corps (which delivers services to organisations in emerging markets) to polytechnics and community colleges in Kuching, Sarawak, where it will focus on health and education.