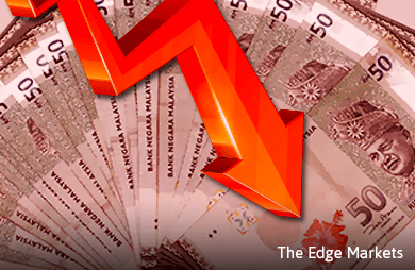 KUALA LUMPUR (Sept 3): The ringgit extended the week’s losses on concern the erosion of Malaysia’s foreign-exchange reserves will further hurt investor sentiment in an economy reeling from falling oil prices and a political scandal.

The reserve holdings have fallen 19%  this year to US$94.5 billion and data on Friday for the last two weeks of August may show the extent of central bank ringgit purchases to prop up Asia’s worst-performing currency this year. Australia & New Zealand Banking Group Ltd. sees a figure of around US$92 billion. Growth in exports may also have slowed in July following June’s rebound from two-months of contraction, according to a Bloomberg survey before tomorrow’s report.

“Any signs of further reserve draw-down or narrowing in the trade balance will hurt sentiment further toward the ringgit,” said Khoon Goh, a strategist at Australia & New Zealand Banking Group in Singapore. “The dollar’s strength isn’t helping.”

Asia’s only major net oil exporter has been hurt by the drop in Brent crude prices, which are down by about half from their year-ago level. A looming U.S. interest-rate increase is also spurring capital outflows, just as Prime Minister Najib Razak faces pressure to step down. Malaysia’s economic foundation is “strong” and local markets have been exposed to global volatility in recent months, he said during a speech in Kuala Lumpur Thursday.

Overseas shipments from the Southeast Asian nation rose 3.2% in July from a year earlier, slowing from 5% the previous month, according to the median estimate in a Bloomberg survey. The trade balance probably narrowed to 6.3 billion ringgit (US$1.5 billion) from 7.98 billion ringgit.

Malaysia’s 10-year government bonds fell for a second day, with the yield rising one basis point to 4.28%, according to prices from Bursa Malaysia.