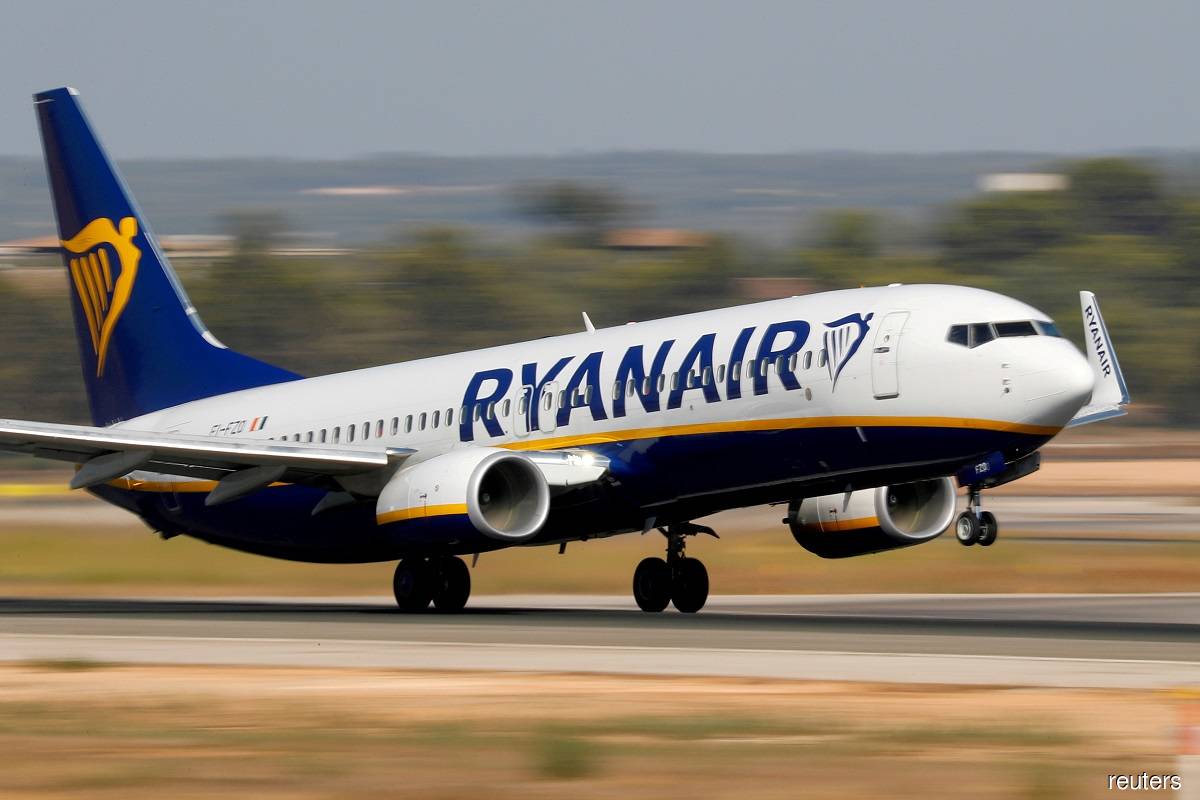 DUBLIN (July 26): Ryanair on Monday nudged up its forecast for full-year traffic on strong summer bookings but said fares remained well below pre-pandemic levels as it reported a first-quarter net loss of €273 million (US$322 million).

The Irish airline, Europe's largest low-cost carrier, said it expected to fly between 90 million and 100 million passengers in its financial year to end-March 2022, up from an earlier forecast of 80 million-100 million.

A surge in bookings saw traffic increase from around one-third of 2019 levels in June to a forecast two-thirds in July, the airline indicated.

At least 10 million passengers are expected in August and September, around 70% of pre-pandemic levels, chief financial officer Neil Sorahan said.

Rival easyJet last week said it hoped to ramp up capacity to 60% of 2019 levels in the July-September quarter.

"We've been encouraged by closing bookings, over the past number of weeks, particularly since the European Digital Covid certificate has been rolled out," Sorahan said in a presentation to investors. "So on that basis we're now improving our traffic guidance."

Ryanair flew 27.5 million passengers in the year to March 2021, down from a pre-Covid-19 peak of 149 million. Sorahan said the airline may beat its forecast of 150 million next year.

The loss of €273 million for the three months to the end of June was slightly better than the €283 million loss forecast by a company poll of analysts.

But Ryanair said it remained impossible to provide a meaningful profit forecast for the financial year to end-March 2022, reiterating that the airline was cautiously expecting to post a small loss or break even before a strong recovery next year.

Revenue for optional extras grew, however, increasing to €22 from €19 as cautious passengers paid to choose their seats and board more quickly.

The average number of empty seats is likely to fall from 27% in the April-June quarter to a more normal level of under 10% during the first half of next year, Sorahan told Reuters in an interview.

Ryanair, which has one of the strongest balance sheets in the airline industry, said it had cash reserves of €4.06 billion, up from €3.15 billion at the end of March following a €1.2 billion bond sale in May.

Group chief executive Michael O'Leary said he did not expect to distribute any cash to shareholders over the next year or two due to large capital expenditure on an order of 210 Boeing MAX 200 jets, which he said were performing better than expected since they entered the fleet last month.

Ryanair remains in talks with Boeing about a significant order of the slightly larger MAX 10 jet for delivery from 2026, and the airline may do a deal later in the year but only if the price is right, Sorahan said.

Read also:
Ryanair may order Boeing MAX 10 this year but only at the right price