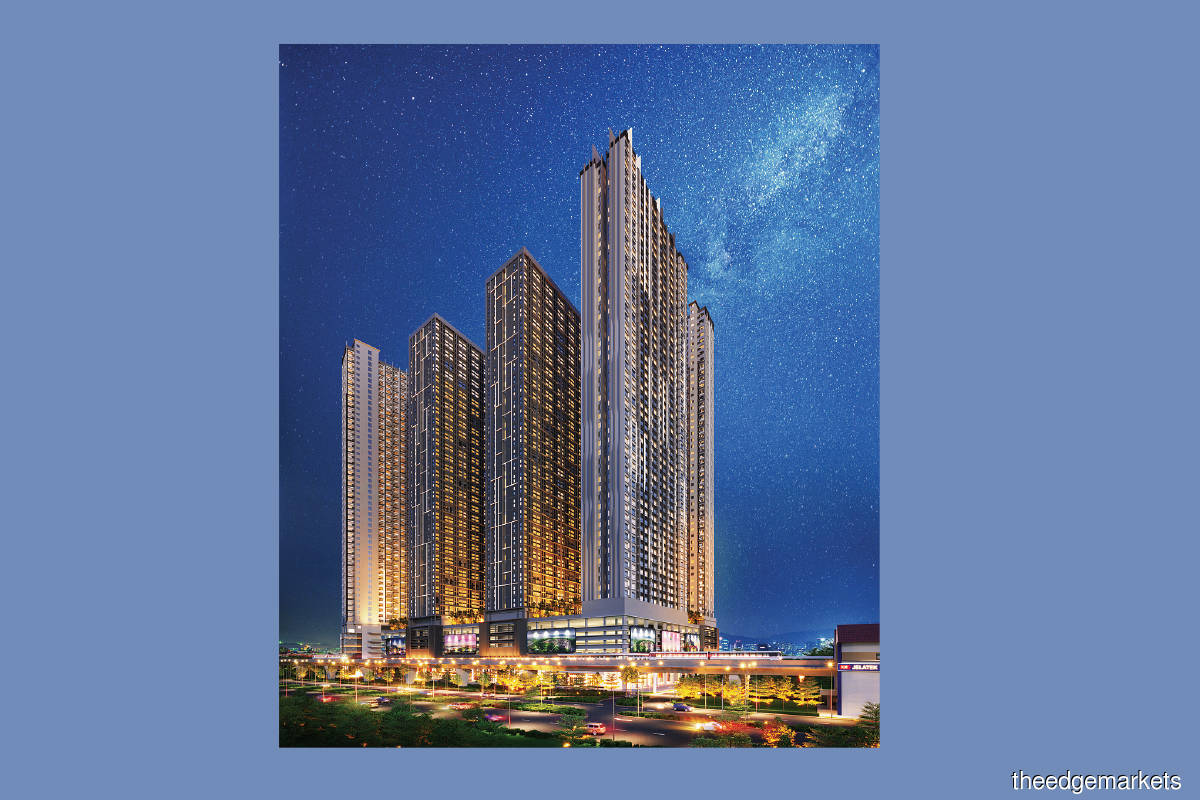 The RM1.6 billion Astrum Ampang project will offer a total of 5,228 units in six towers of between 24 and 48 storeys (Photo by Setia Awan)

The entire 6.85-acre leasehold development on Jalan Jelatek, Kuala Lumpur, has an estimated gross development value (GDV) of RM1.6 billion and features six towers — Towers A, S, T, R, U and M — of between 24 and 48 storeys. It will offer a total of 5,228 SoHo transit homes, SoHo suites, serviced apartments as well as Rumah Mampu Milik (RMM) SoHos and serviced apartments. It will also have 27 shops.

The SoHo transit homes, which are studios with built-ups of 280 sq ft, are priced at RM230,000. Phase 1 is slated for completion in 2026. “The construction progress is well within the expected timeline and, with the very healthy take-up rate of Phase 1, we [are confident that we] will continue to achieve the same success with the upcoming phases,” says Bruyns.

He notes that buyers at Astrum Ampang come from all over Malaysia. “Most of the purchasers are currently residing in Selangor and are within the age bracket of 20 to 60. “Based on the success of Phase 1, Phases 2 and 3 are on track to being launched in 3Q2022 and 1Q2023 res­pec­tively. We believe the market is anticipating our upcoming launches.”

Another ongoing project of Setia Awan is Brezza Hill @ Bukit Ampang Permai, which comprises a total of 660 units spread over four towers and is 95% taken up since its launch in 2020. Of the four towers, Towers A and B are fully sold. The project has a GDV of RM527 million.

Despite the Covid-19 pandemic, construction progress at Brezza Hill is at 35% and within the projected timeline, says Bruyns.

“[Brezza Hill offers] unobstructed views of the Kuala Lumpur skyline, spacious layouts, proximity to a forest reserve and easy access to the SUKE (Sungai Besi–Ulu Klang Elevated Expressway) interchange. These are among its qualities that have captured the hearts of its [purchasers] who mostly bought the units for their own stay. As it is a residential titled property, it is a gem in the market today,” he says.

Following the success of Brezza Hill, Setia Awan is developing the 300-unit

Carra Hills, which is adjacent to Brezza Hills and has a GDV of RM275 million. “The upcoming project is an upgrade of Brezza Hill and will feature bigger layouts with a dual-key concept to cater for multi-generational family needs under one roof. We also see a growing demand for this concept,” Bruyns explains. He says  Carra Hills is expected to be officially launched in June.

In addition to Astrum Ampang and Brezza Hill, Setia Awan’s other ongoing projects are Unisuites Kampar and Taman Bidor Bistari in Perak; Sri Melaka Residensi in Melaka; and Kemayan Heights in Negeri Sembilan. In total, the ongoing projects — with a total GDV of RM3.3 billion — will offer 11,194 units, which are slated to be completed by 2026.

Meanwhile, Bruyns says the Covid-19 pandemic has pushed the company to use technology more widely in its daily operations and marketing strategies.

He is also optimistic of the property market outlook in the medium to long term. “With the government’s vaccination programme and continued downward trend of infections in the country, we are seeing a healthy restart of industries as a whole. With the recovery of the property market in 2022, home buyers’ confidence and demand for quality homes will strengthen.”