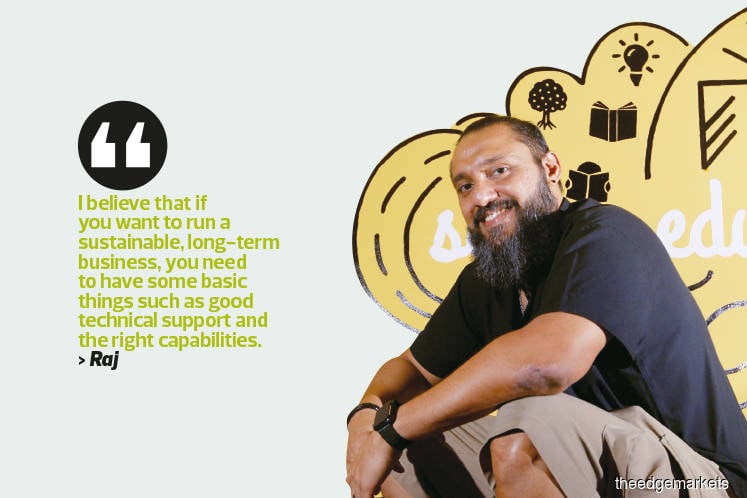 Science of Life Studies 24/7, or SOLS 24/7, is known for its education outreach programmes. But now, it is making waves in renewable energy.

Its sister outfit, SOLS Energy, is bringing innovation to the country’s renewable energy sector, with significant developments in its back-end technology. It is with this edge that the social enterprise — a high-power solar company — managed to secure RM500,000 in funding from early-stage venture fund and seed accelerator, 500 Startups’ Southeast Asia-focused 500 Durians II fund.

Everything from applications to the Sustainable Energy Development Authority Malaysia for Net Energy Metering quota to the payment gateway and the complexities of customer relationship management are built into an easy-to-navigate platform for customers to monitor and evaluate the performance of their solar photovoltaic panels, says the company’s founder and CEO Raj Ridvan Singh.

Today, SOLS Energy is a market leader in the residential solar installation business and a first-of-its-kind academy that trains disenfranchised youths in solar installations. “We are a technology company doing renewables because we use technology components to run the business. It is like Grab’s e-hailing service, which is a transport service provider, but the entire process is technology-enabled,” says Raj.

But how did this do-gooder, whose focus was essentially holistic education and humanitarian work, get into the renewable energy game? He attributes it to his unconventional upbringing and how it became a driving force in his mission to turn capitalism on its head.

Raj was exposed to poverty at a young age. His father, Dr Madenjit Singh, was posted overseas, mostly to impoverished countries, and he often brought his family of four with him. Living in countries like Papua New Guinea, India and Cambodia left a profound impact on their lives as their daily encounters often brought to the fore the stark differences between the rich and the poor.

“When I was seven, my brother and I were sent to a boarding school in Panchgani, Mumbai. We took the train from Delhi. The train is actually one of the best ways to experience India. You get to see it in all its glory, the good and the bad,” says Raj.

“I remember feeling very surprised seeing children my age selling stuff on the train and trying to get by. It did not make sense that these kids did not go to school. It felt very unfair. We had everything, from a good education to even video games, while these children were trying to make a living by selling peanuts and bottles of water.”

The family moved back to Malaysia when he was a teenager and he realised that the problems that plagued the poor and the unequal playing field were not specific to countries grappling with problems such as a huge population like India. Deep-seated issues related to growing capitalism in Malaysia meant the lack of protection for employees, who were often at the receiving end of their employers’ ire.

In 1997, Raj (who was 14 at the time) and his brother moved to Cambodia with their father. The boys were home-schooled.

Madenjit, founder and chief director of SOLS 24/7, made the move to Cambodia after witnessing first-hand the battle that resulted in a coup and the disastrous consequences of the many civil conflicts in the country. He then decided to teach youths subjects like English and Maths as well as life skills. The initiative became a stepping stone to establishing SOLS 24/7, the biggest non-formal education provider in the country.

It was this rather unique environment and experience that led to Raj becoming Asean’s youngest Microsoft Computer System Engineer at 17. He worked in this field for a few years, but found that he was happiest when he was on the same path as his father. So, he returned to Cambodia to help expand the reach of SOLS 24/7 to Timor-Leste, Malaysia, Laos, India and Thailand.

SOLS 24/7 started out as a non-governmental organisation (NGO) with a focus on education and social empowerment programmes. But as a non-profit body, it relied on grants to run programmes for underserved communities to break the cycle of poverty.

“I had mastered the art of corporate social responsibility. I was hanging out with billionaires and they were keen to support us because our programmes were effective. I was intelligent, outspoken and driven so I was able to deliver,” says Raj.

“But when my wife and I were expecting the birth of our first child, I realised that I could not go on with just a salary of RM1,500. So, I used the same principles and set up a business. Our non-profit arm already had 300 to 400 centres throughout the region teaching English for free. So, I knew our curriculum was effective.”

Bridging the gap between capitalism and social good

All this gave him an idea: a business that could help bridge the gap between capitalism and social good. That eventually gave birth to the concept of SOLS SMART Sdn Bhd.

“We then worked on providing language programmes to government agencies to train their staff. We were much cheaper than the regulars like British Council. I tendered for projects in Malaysia and SOLS SMART took off as an online learning platform and as a certified Cambridge English Language Assessment centre,” says Raj.

“Within nine months, we were making millions because going online made English accessible to anyone, anytime and anywhere. So, I became a multi-millionaire overnight and that was amazing.”

Some 80% of the profit was then channelled to its non-profit entity. But something was missing.

“I read a lot from a very young age, especially the autobiographies of wealthy people. And I realised that most of them were in the energy business,” he says.

“That was why I wanted to get into the oil and gas industry when I was younger. But then I realised that it was a ‘rich boys’ game’. If you do not have US$1 billion, do not waste your time.

“But five years ago, I read somewhere that Malaysia was the third largest manufacturer of solar panels and I was thrilled.”

It may have been too late to get into the oil and gas business, but renewable energy was just making headway in the country with the growing awareness of the impact of climate change. However, it was a business Raj knew little about. So, he did not raise any funds initially for this business.

“If I had lost money, it would have been my own. I was very afraid of burning any investor’s money because by then, I was already a public figure for the work I was doing at SOLS 24/7,” he says.

Raj had come across many entrepreneurs who raised money, burnt it and eventually shut down their business. True enough, in the course of learning the ropes, he burnt nearly RM1.2 million. But at least it was his own money and he was not accountable to other investors.

Setting up SOLS Energy was not just about sourcing and fitting solar panels but ensuring that there was capacity to manage a business of that scale. “I believe that if you want to run a sustainable, long-term business, you need to have some basic things such as good technical support and the right capabilities. You also need to have great customer service, but you need to have even better after-sales service and a secure supply chain,” says Raj.

“So, if you are going into this to become a distributor, you also need to build the right capacity. All these things take time.

“I wanted to build a long-term business because 80% of our profit funds our NGO. So, I looked at building up the back-end process. I had solid technical people and engineers on staff and I wanted to train my installers to ensure that we could maintain quality.

“I knew that if I focused on quality, there would be sustainability. Finally, after four years, we became the market leader in installing solar panels for residential houses and started to break even. We have good and bad months. But on the whole, it is going okay.”

Unlike its peers, SOLS Energy uses solar inverters from Austria, panels from China and cables from Germany. Initially, it depended on external hires to do the installation and upkeep of the panels. But later, Raj felt that its output and capabilities could be improved by building a pipeline of its own. So, he set up a solar academy to train youth from poor communities.

“Even in this business, the bulk of the profit is enjoyed by the bosses, and not so much the employees. But if you design a business model where everyone can earn, then you make it sustainable and attractive,” he says.

“We launched this programme to create solarpreneurs. We started by training people, especially those from underprivileged communities.

“In the beginning, they earn a basic salary. But as they get better at what they do, they can earn up to RM2,000 compared with the RM500 they would otherwise earn doing odd jobs.”

Raj says it has been a rewarding experience as SOLS Energy has become a holistic venture. “From the moment I decided to start a business, I wanted to build one where everyone could benefit — not something that is centralised or dependent on any one person.

“I have a bunch of businesses that are sustainable, make money and create impact. We cannot hurt people and we cannot hurt the environment. I still see a lot of bad practices, a lot of companies that try to monopolise and control their staff. But I think if there are more young people who realise that happiness is the end goal, they will try to make a difference.

“I am not saying do not be rich. I am not poor, I have made a lot of money and I live a very good life. But at the end of the day, if I want to be happy and motivated by what I do, I know it has to be a holistic venture. That is what social entrepreneurship is all about.”