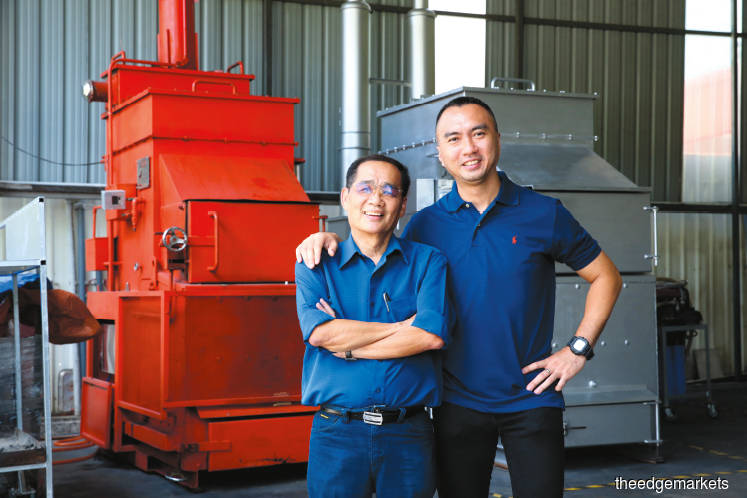 Global problem being addressed: The world is seeing an increase in solid waste generation. In many countries, solid waste is simply sent to landfills or incinerated. Neither solution is ideal.

Potential addressable market: The waste sector is forecast to become a US$2 trillion market by 2020, according to a UBS Switzerland AG report in May 2018.

Number of patents: One

Product description and USP: Pamarai distributes the Asher, a machine that is able to “steam and bake” waste into multi-purpose ash without polluting the environment, solving the problems associated with landfills and incinerators.

Industry challenges: Lack of support and endorsement from the government.

The world is generating more waste and it is contaminating the land and polluting the seas. In 2016, cities around the world generated 2.01 billion tonnes of solid waste, amounting to a footprint of 0.74kg per person per day. With rapid population growth and urbanisation, annual waste generation is expected to increase 70% from 2016 levels to 3.4 billion tonnes by 2050.

Malaysia acknowledges that waste management is one of its biggest challenges. Last year, Housing and Local Government Minister Zuraida Kamaruddin was quoted as saying that the country generates 38,000 tonnes of waste on a daily basis. Of that amount, only 24% is separated and recycled; 76% goes to the landfill.

Landfills emit toxins and greenhouse gases, not to mention leachate (a liquid that forms when water filters through landfill waste and picks up toxins that go into the ground) while waste-to-energy (WTE) incinerators emit low levels of toxic pollutants.

Malaysian company, Pamarai Sdn Bhd, came up with a solution. It is the exclusive distributor of the Asher, a 6m tall machine that reduces most solid waste materials to non-toxic ash without discharging any pollutants into the atmosphere.

When waste is put into the Asher, it ends up in the thermal degradation chamber, where it decomposes via a pyrolysis process, or the process of chemically decomposing organic materials at elevated temperatures in the absence of oxygen. The irreversible process involves a change in the materials’ chemical composition and it is commonly used to convert organic materials into solid residue containing ash, carbon and small quantities of liquids and gases.

Roland Tee, the inventor of the Asher, designed a water filtration system to prevent the dioxins and furans — the toxic emissions that result from this process — from being discharged into the atmosphere. He filters the smoke emitted by these machines through Nanogreen-infused (a mixture of 13 types of metallic minerals) water, resulting in emissions that are neutral and not harmful.

The machine is also equipped with a wet scrubber that removes other possible internal pollutants. And if this is not enough, the water in the scrubber tank is connected to a water filtration system and then reused.

In the Philippines, an Asher unit has been installed in a small village, Marikina. The government used to pay US$100 per tonne to a contractor to collect municipal solid waste to be sent to the landfill. Now, its City Waste Management Office incentivises residents to bring their trash to the Asher. And the resulting ash is mixed with sawdust and sold as fertiliser to farmers, allowing the council to generate income.

If the ash cannot be turned into fertiliser (because of the source), it can still be used for multiple purposes such as general landscaping and conversion into building materials. A temple in Pune, India, for instance, turns leftover ash into sand bricks, which are then used to repair the temple, build more benches and create more walking pavements around the temple grounds, says Pang.

“The Asher presents an opportunity to treat waste in a definitive and effective manner. It is the most realistic solution any country can have to treat waste. I am not saying this is only applicable to Third World countries. It could also be used in First World countries. Developed countries like the US also face waste management problems,” he says.

In many countries, waste management is still a huge problem because of poor execution, says Pang. Countries such as Malaysia have tried to enforce waste segregation to help with the recycling process. “In the end, everything ends up in the same bin. First World countries face this too. When the project fails, they send the waste — deemed as non-recyclables — to Southeast Asian countries,” he adds.

When China banned the import of plastic waste last year, most of the waste was redirected to Malaysia. Earlier this year, the authorities shut down 139 plastic recycling premises that had been operating illegally or had contravened provisions in the Environmental Quality Act since July last year.

Pamarai executive chairman Datuk Mohamed Razeek Md Hussain points out that the Asher can help alleviate the problem of illegal plastic recycling plants in Malaysia. “If we are able to install one of the 2.5-tonner Ashers in all these factories, they can start loading two tonnes of plastic a day, cleaning up 100 tonnes of plastic within 50 days. The new government has done a very good job at closing down illegal recycling plants, but what happens to all the plastic? It does not go anywhere. It is not being treated. It just gets relocated.”

Pang says the Asher’s first prototype was created in 2010. Then, it was developed and improved until it become a commercially viable unit in 2014. That year, it was sent to the Philippines’ Department of Natural Resources and Environment and one of the country’s local universities for research and testing. In 2016, a much-improved version was developed and sold to a company in Jakarta, Indonesia.

Pang hopes that the company can get more support from the Malaysian government to address the world’s waste problem on a greater scale. To date, fewer than 10 of the Asher machines are distributed in the country. That is because the company faces regulatory roadblocks, especially concerning the need to conduct an environmental impact assessment.

“I think the Malaysian government should be more like China’s. The Chinese government has managed to accelerate the pace at which the country’s products and services are recognised throughout the world. People used to say China produced substandard or low-quality products. But now, everyone is buying Chinese products. They are no longer the world’s photocopy machine. They are producing much better products than many other countries,” says Pang.

“The Chinese government did not only help companies by providing them with monetary assistance but also provided support in terms of policymaking.

“In the case of Malaysia, some of us are hindered by regulations and policies before we can even get off the ground. We hope that by receiving recognition and endorsement from the government, we can be propelled to greater heights and make a more global impact.”

In addition, although the technology is being used in neighbouring countries, Malaysia’s town and city councils have been particularly unsupportive. When the Asher team met with members of these councils, they were greeted with indifference, if not downright resistance.

“Here is the thing. I deliberately did not create larger versions of the Asher because if it is small, the waste treatment process can be decentralised. Let’s say the Klang Valley produces 1,000 tonnes of trash every day. If the WTE incinerator they are planning to build is facing downtime or undergoing maintenance, will the trash wait? It will still be there tomorrow — in fact, double in size.

“To process 1,000 tonnes of trash, we need 500 units of the two-tonner Asher. This small machine can be distributed all over Kuala Lumpur. It will only take up the size of one parking lot, compared with a 1,000-tonne incinerator, which will need 30 acres of land.”