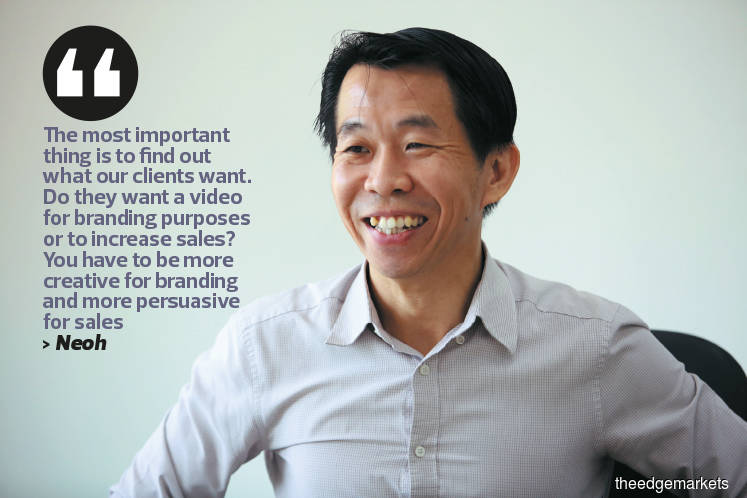 In 2013, 37-year-old Ken Neoh was operation programme manager at Foxconn Technology Group, the world’s largest contract manufacturer of electronics products as well as the largest assembler of Apple products. The factory he was working at was located in Shenzhen, China, and it housed 500,000 workers, who churned out hundreds of thousands of products a day.

At its peak, there were 68 engineers working under Neoh and their task was to ensure that part of the factory’s assembly line operated smoothly and efficiently around the clock. It was not an easy job, but he got a sense of satisfaction, especially when his team performed well.

In fact, Neoh’s team would line up in front of him and offer toasts during the company’s annual dinner. “They would thank me for my contribution and say that I took good care of them,” he recalls.

However, the birth of Neoh’s first child changed everything. His wife, also a Foxconn employee, quit her job and returned to Malaysia to have the baby. They were separated for nine months before she returned to China. By this point, they had decided that they wanted to raise their child in Malaysia.

Neoh’s busy schedule would also prevent him from being a good husband and father. For starters, he received work updates via texts or phone calls all day long, sometimes even at midnight. When any machine broke down and nobody could fix it, he would have to rush to the factory.

“Manufacturing is a cost-centric operation. When you are producing something at a lower price than your competitors, you need to be very good at controlling costs. Everything has to be accurate and optimised,” he says.

“When an assembly line breaks down, there could be 300, or even 3,000, operators standing around with nothing to do. In one night, the losses could easily run up to several hundred thousand dollars.”

At this time, Neoh was already an amateur photographer. This hobby gave him a break during his intense daily routine.

“My mind was always busy thinking about work. But when I am capturing the photo of a flower, butterfly or scenery, I would only focus on the object in front of me — nothing else. And I would capture the object from different angles, making it look unfamiliar and giving people a fresh perspective on it,” he says.

So, perhaps it was a natural progression that Neoh hit upon the idea of starting a production house to provide retail businesses with commercial photos and videos when he was looking around for something else to do. He called his company Infinite Loop Media and it would be a stepping stone for him to move back to Malaysia a few years down the road.

Neoh decided to start his new venture in Johor Baru because he believed in the economic prospects of the southern state. He thought the city would develop rapidly because Iskandar Malaysia was to be to Singapore what Shenzhen was to Hong Kong.

“I had worked and lived in Shenzhen for more than a decade and seen how the city developed. I believed that Johor Baru would benefit from Singapore in a similar way,” says Neoh.

He was uncertain about the future of his new venture back then. Little did he know that the company would go from a one-man show to a team with 20 people in just five years.

Today, it produces creative content, including videos and animation, for more than 300 companies in Johor Baru and Singapore and is expanding to Kuala Lumpur and Penang. “We dominated the corporate market in Johor Baru and managed to have our revenue running into six figures this year,” says Neoh.

Understand the needs of your employees

Neoh attributes the company’s initial success to his ability to hire the right people and retain them. He did not have any experience in the creative industry and was managing the company remotely from China. However, his first two employees were committed to growing the business with him.

Infinite Loop’s first employee was Tan Cha Min, a fresh graduate of Universiti Sains Malaysia. Stationed in an office on the fourth floor of an old shoplot in Taman Tasek in Johor Baru, she would handle all the client engagements and video production while Neoh was cold-calling from China to solicit business.

“The most important thing is to find out what our clients want. Do they want a video for branding purposes or to increase sales? You have to be more creative for branding and more persuasive for sales. We did not know about this and there was a lot of guesswork at the beginning, which led to challenges and even losses,” says Neoh.

He recalls a particular client who engaged the company for a 30-second commercial video that should have been easily completed within a few days. It took more than two months and the company lost more than RM10,000 in the process.

“It was a nightmare. The client did not like to talk. He always had a poker face. When we asked him if he liked our idea, he would say, ‘You think lah. You are the expert and we pay you to do the job, right?’ Eventually, we revised the video more than 10 times! It was a lesson learnt,” says Neoh.

Tan weathered all these challenges with him and is the company’s office manager today.

The second person he hired was Louis Ngu, the company’s first dedicated salesperson, who would go out to market and grow the company. Like Tan, he would remain committed to the company through thick and thin and is its senior sales executive today.

Neoh says he was able to retain his staff because he started at the bottom at Foxconn, as a technician before slowly working his way up to manager. His years in China helped him see all sorts of things and become a more sympathetic and understanding employer.

For instance, to book their tickets for the Chinese New Year holidays, they would have to call at least three months ahead. And even then, only get a standing ticket for a 2,000km ride. The train would be so cramped that they would be unable to go to the toilet. So, they would eat and drink less for two days before the ride and wear adult diapers throughout the journey.

Malaysian employees do not go through as much, but they are not that different from the workers in China, says Neoh. “They want to fulfil their basic needs and duties, which include being a filial son or daughter. They want to earn well, contribute to the company, be recognised and lead a balanced life.”

One thing he has learnt is not to question employees when they make a request. “An employer should trust his employees and try to fulfil their needs through discussion and negotiation. Most of the time, they are able to propose creative win-win solutions,” he says.