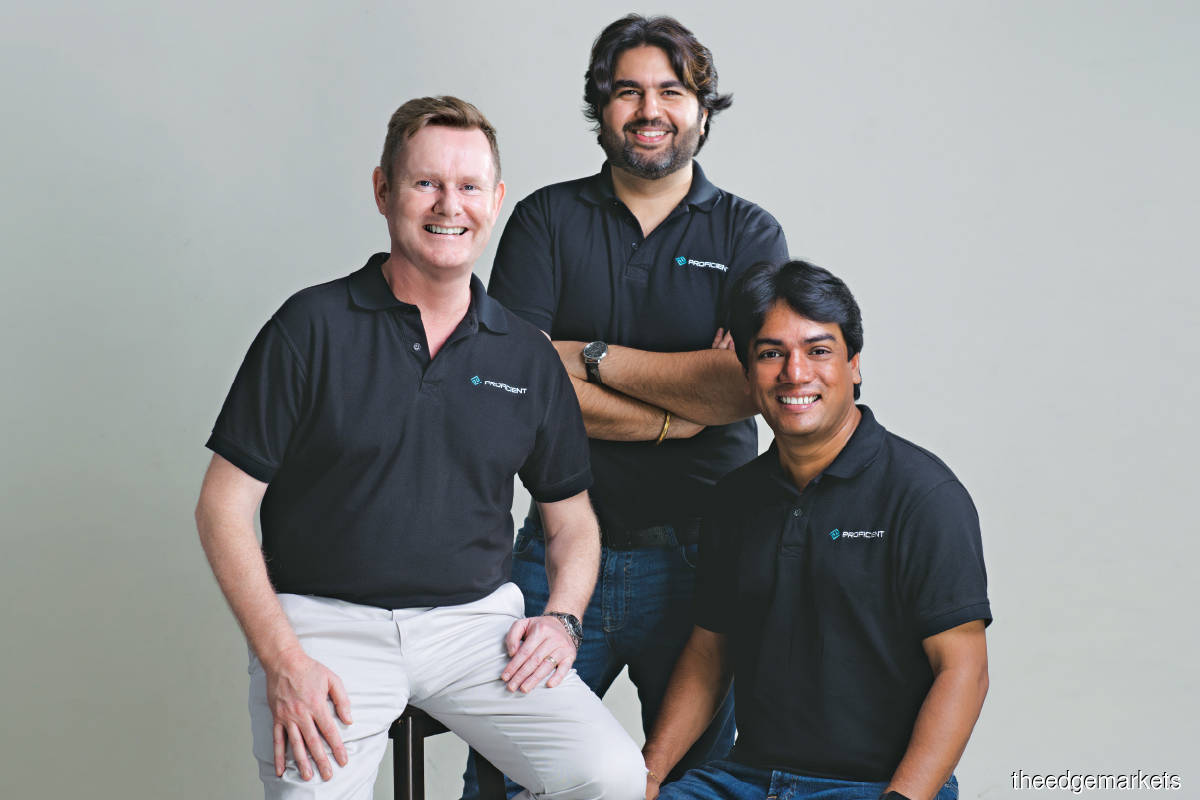 From left: Roche, Jitin and Dipankar are the co-founders of Proficient

Although it has a lot of potential to be at the forefront of technological innovation, the construction industry has lagged behind other industries.

Despite the fact that technologies such as drones, wearables and GPS trackers are transforming construction sites, the manual, conventional approach of project management with physical paperwork, logistics and inventory is interfering with the digitalisation process.

Players in the construction industry still use email as a means of communication, with some using the fax to share information, making it a hassle to transfer information, especially if several people are supervising a project.

From an industry perspective, Oliver Roche, co-founder and chairman of Proficient, says Malaysia’s technology adoption is growing but has a long way to go. Almost a whopping 90% of projects globally, including in Malaysia, lack any form of digital project management tool. Nevertheless, there has been a push to exploit technology by the Construction Industry Development Board (CIDB) in its 2022 Strategic Planning.

“The private sector in Malaysia is now recognising the benefits of digitisation in the industry and the fact that it’s a good thing for them because it mitigates miscommunication. It prevents potential delays and information can be retrieved instantaneously,” he says.

Recognising the gap and technological potential, Roche and his co-founders set up Proficient to provide the opportunity to streamline a construction’s project management, allowing multiple parties to view and manage projects via their mobile phones or desktop applications. The goal, he says, is to bring the relevant stakeholders involved in the industry together in a collaborative way to digitalise the industry.

“I have not seen a product globally that has successfully had everyone exchange information and stored data on one platform so that stakeholders could share information live and expedite the communication process,” says Roche.

Proficient was set up to address the project management gap in the Malaysian construction industry. Jitin Girdhar, CEO of Proficient, says they felt the need for it as there was no such software that could do proper project management.

“There is software in the market that focus on either documentation or operations, but none that combines both,” he says.

Digitalisation in the Malaysian landscape

The digitalisation of the Malaysian construction industry is a little behind the times but a prevalent problem across the globe, says Dipankar Mitra, director of Proficient. Owing to the Covid-19 pandemic, however, Malaysia’s receptiveness to technological adoption is improving, he adds.

“Digital adoption has taken centre stage, which is a good thing. What we want to do is to be able to show construction companies that they don’t have to be on site to know how much work has been done. I can just log into Proficient and view the dashboard to know about work progress, what is lacking or whether there is a budget overrun,” says Dipankar.

Roche adds that the team has also expressed their interest to engage with CIDB or any other ministries to promote the adoption of digitalisation in the construction industry. “It would be great to see more collaboration between the likes of the CIDB and the Ministry of Works or other agencies involved to see how we can expedite tech adoption.”

Proficient’s user interface is intuitive to use. Jitin explains that the platform is seamless and the team takes the time to walk users through the application and tailor it to customers’ preferences.

Customers will also be provided with the complete application, which can be accessed via a mobile app or desktop browser application. Jitin says beyond that point, the system is fully automated and will be ready to use within a day.

“We used Facebook as a parameter to design it to mimic the effortless use of the app. The people who are going to use the application are probably 20-year-old architects and 70-year-old contractors. The only application they both can use without training is Facebook, so we designed it in a way that if you can use Facebook, you can use Proficient.”

Proficient has collaborated with some of the biggest Malaysian corporations, including Hap Seng, Malaysian Digital Economy Corporation (MDEC) and Naza TTDI in the process of technological adoption in project management.

Proficient’s proprietary software will be used in a number of Boustead’s multimillion ringgit construction projects across Malaysia. Additionally, Boustead, through its wholly-owned subsidiary, Boustead Digital Services Sdn Bhd, has recently acquired a 10% stake in Proficient and will be looking to inject a monetary investment to bolster Proficient’s expansion into local and regional markets, while also accelerating more innovative functions and artificial intelligence (AI) capabilities on the platform.

Proficient also received the Most Promising Start-up 2021 in the Top in Tech Innovation Awards, which was endorsed by the Ministry of Science, Technology and Innovation.

Reinforcing cybersecurity and implementation of AI

Given that cyberthreats and information abuse are rampant, especially when sensitive information is involved, Proficient has taken steps to ensure that its system’s security is at a level where it would be almost impossible to tamper with.

Dipankar says the system is designed in such a way that multiple versions of a document would be created if anyone were to meddle with the original document. Although their current architecture is already heavily protected, there are plans to adopt blockchain technology to further strengthen the application.

“We also have plans to bring in a huge amount of innovation in terms of how we use AI in this. We are currently using some parts of AI. We have already implemented chatbots and natural language processing (NLP) in our software too,” says Dipankar.

Jitin also reveals the company will be implementing predictive analytics to foresee team performance and the kind of people to work with based on their productivity score given by the application.

“[The score] is based on historical datasets, so one cannot change anything because the system records everything. There’s no tampering with any information,” he stresses.

Proficient has been taking meticulous measures from the infancy of its product to ensure it is highly secured. Each time the data or network is violated, the information hacked would be useless to the hacker as each layer of the network is highly encrypted. Microsoft, being the company’s technology partner, helped with the execution of the kind of security features needed.

The software is also transparent enough that it mitigates the risk of potential fraud or corruption.

According to Roche, everyone using the platform can be monitored and rated, from stakeholders to clients, allowing transparency and accountability — two elements that are lacking in the industry.

Going forward, Roche foresees the use of augmented reality (AR) and virtual reality (VR) in project management. However, it is still early for Malaysia and Southeast Asia at the moment.

“Maybe in five to 10 years, we will see these technologies here, especially with 5G, because it can expedite the use cases of technology in general.”