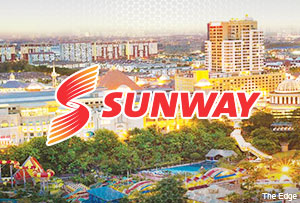 KUALA LUMPUR (Sept 19): Sunway Bhd has proposed the listing of its indirect wholly-owned construction unit, Sunway Construction Sdn Bhd (SunCon), on the Main Market of Bursa Malaysia by the second quarter of 2015.

The group will be injecting SunCon into a new company, Sunway Construction Group Bhd (SCG) for the proposed listing.

“The main rationale for the proposed listing of SCG is to unlock the value of SunCon and distribute part of the benefits to the shareholders of Sunway,” said Sunway Group Founder and Chairman, Tan Sri Jeffrey Cheah in a press release this evening.

Under the proposed listing exercise, Sunway has proposed a 1-for-10 distribution-in-specie of free SCG shares to shareholders of Sunway.

“Besides the proposed distribution-in-specie, a special cash dividend will also be declared and distributed to the shareholders of Sunway from the proceeds of the proposed offer for sale of SCG shares,” Cheah added.

The group said up to 35.7% of SCG shares will be offered to institutional and retail investors, while Sunway will retain majority control of SCG, with at least 51% equity stake.

SunCon has over 30 years of experience in the construction business, and has completed major projects including the Kuala Lumpur Convention Centre, SILK Highway, Sunway Pyramid Shopping Mall and Legoland Theme Park.

The company has also ventured into India, Trinidad and Tobago and the Middle East.

SunCon boasts an orderbook of RM3.4 billion as at July 31, 2014, and has won many awards, including the International Achievement Award at the Malaysian Construction Industry Excellence Awards (MCIEA) in 2009 and 2013.

The company was previously listed on the then Kuala Lumpur Stock Exchange in 1997 for seven years, and was de-listed in 2004, after receiving a voluntary general offer by Sunway Holdings Incorporated Bhd.