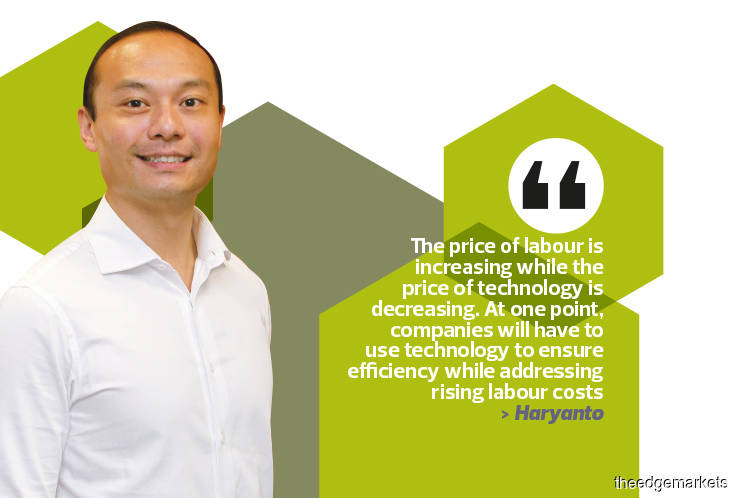 Ferron Haryanto had spent most of his life in San Francisco, California, where he grew up and worked in various companies for 13 years, mainly as a technology consultant. Five years ago, he embarked on a new journey, returning to his roots in Indonesia to start his own business.

Coming from a family that was in agriculture-related businesses, Haryanto wanted to do something similar but from a technology perspective. Instead of reinventing the wheel, he looked for tried and tested technologies to build on.

Haryanto stumbled upon e-Komoditi Sdn Bhd — a subsidiary of Bursa Malaysia-listed information and communications technology player HeiTech Padu Bhd — which had an integrated plantation management solution, among others, and decided to bring this to Indonesia. His initial idea was to distribute the plantation solution in Indonesia. He also wanted to provide technology boot camps — for Android, Java or Microsoft development — and bring trainers from Malaysia to conduct them.

“However, we quickly cancelled that project because there was not enough demand. Also, it did not make business sense to bring Malaysian trainers here,” says Haryanto.

“The Indonesian market is very big and palm oil is the country’s second largest export. There are a lot of opportunities in this space. So, we decided to delve into this sector first,” he says.

eKomoditi Solutions is trying to increase the sector’s operational efficiency by reducing manual effort and decreasing fraud through data transparency. Currently, most of the plantations in Indonesia use pen and paper to record information, which leaves a lot of room for error. And what is recorded is neither questioned nor analysed, which is a missed opportunity, says Haryanto.

That is why the company developed the Electronic Plantation Control System (ePCS), a software-as-a-service solution. The software, which covers various modules of the business functions in the plantation industry, was developed using a multilayer system web design architecture. This means it can be easily accessed via smartphones, tablets and notebook computers in areas of limited bandwidth.

Adding control to the supply chain

The ePCS software has four modules. The first is attendance and activity planning. Powered by biometrics technology, the system is able to identify who is working, what they are doing and how many hours they have worked.

The second module revolves around the production process. Workers are able to record how many fresh fruit bunches (FFB) in a particular block or sub-block have been harvested and their quality. The data is used to determine which trees require more fertiliser, water and better irrigation. “Our data is very granular,” says Haryanto.

By requiring pictures to be taken and grading of the fruit to be done on the plantation field, the system reduces the likelihood of premature harvesting. Harvesting unripe fruit reduces the quantity of oil that can be extracted, which affects the company’s bottom line. Haryanto targets an increase of 0.5% in the oil extraction rate through use of this system.

This could also help address ghost bunches or theft of the fruit, which Haryanto estimates causes a loss of about 5% for plantation companies. The stolen fruit is usually sold to another plantation, or even the plantation it was stolen from, through another channel. The system’s ability to add controls such as taking pictures and periodically counting the fruit reduces the opportunity for theft.

Next is the transport module, which involves the delivery of FFBs to the processing mill. Haryanto says the quality and price of palm oil depends on the percentage of free fatty acids (FFA), which increases over time after the fruit is harvested. High FFA content affects the quality of the oil and leads to various health and environmental issues. So, it is imperative to get the harvest to the mill as quickly as possible.

“We want to capture the data on when the fruit is harvested and when it is processed to make sure that it is within the ideal FFA content range. Depending on the location of the plantation, transporting the fruit to the mill can take up to 12 hours. We collect information on how far away the mill is, who is driving, what time they arrived at the mill and the quantity of fruit they delivered,” says Haryanto.

“This sets a layer of control because there are issues when transporters change cargo mid-trip. By collecting data at each point, such as the picture and quality of the fruit as well as the identity of the driver, the company is able to ensure that there is no foul play.”

The last module is grading. Although the fruit is graded at the plantations, another type of grading, measuring different metrics, takes place at the mill. This step is very important, especially for fruit purchased by companies outside their plantations (typically smallholders), says Haryanto. All the information from the four modules is then processed into tables, graphs and other report forms, he adds.

This seems to work well in reducing the amount of waste and fraudulent activities in the palm oil industry. However, three years ago, Haryanto and his team saw another gap they could fill — the absence of a database for plantation or agricultural assets for sale in Southeast Asia.

Most plantation assets in the region are sold via referrals. Meanwhile, the information provided on advertisements of agricultural assets for sale on the internet is usually outdated or incorrect. It is almost impossible to find out whether the assets are ready for purchase and free of encumbrances.

“If I ask five people about the price of a particular plantation asset, I will get five different answers. That is why we started a platform called Plantation Directory, one of Southeast Asia’s first dedicated platforms for agricultural assets. Our goal is to provide a new and safe way for plantation buyers and sellers to interact with each other,” says Haryanto.

“We focus on agriculture and we have a strict checklist specific to that industry that has to be adhered to before anything can be listed. We have to make sure they are listing real assets.”

The directory currently lists palm oil, teakwood and rubber plantation assets. Both sellers and potential buyers are vetted by the platform. For instance, the latter would need to submit proper documents such as a letter of intent and proof of funds before they can make a purchase.

Making a case for digitalisation

After the plantation companies implemented the ePCS system, most of them did not share their data with eKomoditi Solutions. So, it was unable to gauge the level of improvement these companies had achieved by adopting its solution. However, some did share the metrics for specific problems that were addressed by implementing the solution.

“For example, some plantation companies told us there was a 10% to 20% reduction in ghost workers [who are on the company’s payroll but do not actually do any work]. As the workers are now biometrically verified, staff costs have gone down,” says Haryanto.

One of the biggest challenges the company is facing is education. While the second and third-generation plantation owners are more open to digitalisation, change must come from both top-down and bottom-up, he points out.

“Like any large software implementation, if they are not comfortable with the system, they will not use it. We have faced a lot of reluctance. But I see this as a very long-term business, so we have to maintain the relationship. We have to show them how the other plantations have benefited from the system and slowly change their mindset,” says Haryanto.

He adds that now is a good time for the plantation industry players to digitalise their businesses as the barriers to the technology have gone down in recent years, finally enabling smaller companies to streamline their operations. “The price of labour is increasing while the price of technology is decreasing. At one point, companies will have to use technology to ensure efficiency while addressing rising labour costs.”

Going forward, eKomoditi Solutions is trying to increase its reach by adding different commodities such as rubber, coconut and sugar into its system. It is also expanding geographically. As Thailand is currently the third largest palm oil producer, that is where the company is headed next, followed by Vietnam.