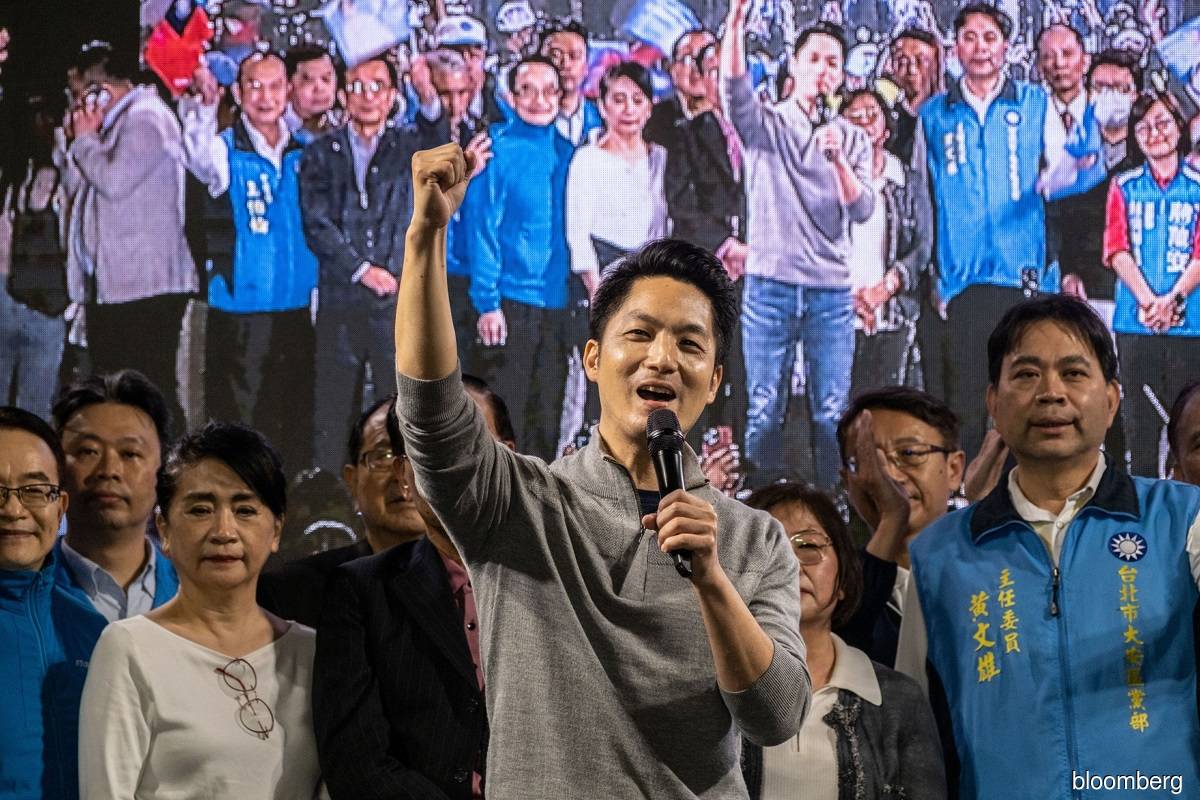 (Nov 27): Chiang Kai-shek's great-grandson declared victory in the race to be mayor of Taiwan's capital, as the ruling party suffered a resounding defeat in island-wide local elections a little more than a year before a new president is chosen.

Chiang Wan-an of the opposition Kuomintang (KMT) will become, at 43 years old, the youngest-ever mayor of Taipei, a position that can serve as a springboard to the presidency.

"Everyone, we did it," he told a crowd of several thousand people outside his campaign headquarters on Saturday night. He did not mention simmering tensions between the US and China over the democratically ruled island's autonomy in his brief remarks.

According to the Central Election Commission, KMT won 13 out of 21 cities and counties, while the Democratic Progressive Party (DPP) only managed to secure five cities in the southern part of Taiwan, the least since its founding in 1986. KMT candidates took 50% of votes in the contests, versus 41.6% for the DPP, 11.39 million votes counted as of 11.53pm on Saturday in Taipei, according to the official election website.

That prompted President Tsai Ing-wen to step down as party leader, saying in televised remarks: "In the face of these results, there are many areas where we need to engage in self-reflection."

The elections represented the last major test of Tsai's DPP before her second and final term draws to a close and Taiwan picks a successor in early 2024. The KMT, or Nationalist Party, hopes the gains in local races will help it mount a comeback after defeats in presidential elections in 2016 and 2020.

The results will be closely watched in Washington and Beijing, since the DPP's rise to power has prompted China to cut off communications with Taiwan and ramp up diplomatic and military pressure on the island. The KMT, which favours eventual unification with China, had previously overseen a historic expansion of ties with Beijing, easing travel, trade, and investment across the Taiwan Strait.

The outcome on Saturday "would count as a major victory for the KMT", said Chang Teng-chi, professor of political science at National Taiwan University. "Eric Chu will take credit for the win, and will be qualified to run for presidency for sure," Arthur Wang, secretary general of Asia-Pacific Elite Interchange Association, said. "However, New Taipei City Mayor Hou Yu-Ih is long favoured as the next candidate in the party. Which of the two strong figures will stand out is yet to tell."

Chiang's great grandfather was the late KMT leader, who fought and lost a civil war against Mao Zedong's Communists and is remembered by many Taiwanese for his repression. Taiwan marks a holiday on Feb 28 each year to remember thousands of people killed in a military crackdown by his government.

In the crowd of enthusiastic supporters outside Chiang's campaign headquarters, Denise Lee, who described herself as an independent voter in her 60s, said she was highly concerned about cross-strait tensions. In August, China held unprecedented military drills around the island that also included the People's Liberation Army sending missiles overhead.

"It's very concerning now," she said. "It actually seems like war could break out."

In other results, the KMT won four of six major cities, where some 70% of the population live. The DPP held on to its southern stronghold of Kaohsiung, where Chen Chi-mai won.

Voters appeared to reject a referendum to lower the voting age to 18 from 20. About 5.6 million people backed the first civil referendum in the island's history, well short of the 9.6 million needed.

One key issue on the minds of voters was the economy as 2022 winds down. Exports dropped for a second straight month in October and officials have warned that overseas shipments for November are expected to fall between 5% and 8%.

Jessica Drun, a specialist in cross-strait ties at the Atlantic Council think tank, said Beijing "will likely be reassured" by the results of Saturday's elections, and may soon make goodwill gestures to the KMT, possibly in the form of economic incentives.

"It will likely also seek to foster or deepen ties with successful candidates and factions in order to shape the party's policy approaches," she said.