Tech: Amazon and the carnage in e-commerce 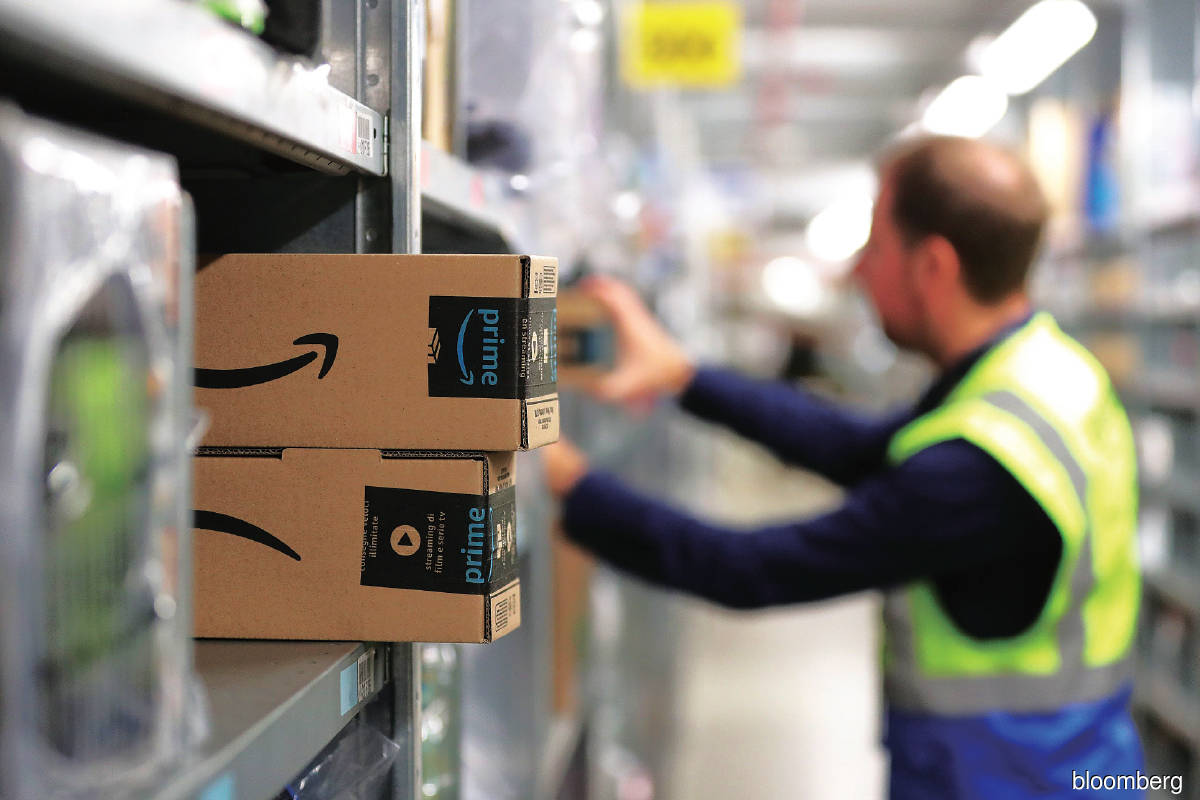 Amazon built far too much capacity during the pandemic years

JUST five years ago, e-commerce powerhouse Amazon.com Inc was one of the most feared companies in the world. In June 2017, when word leaked that it was buying the Whole Foods Market grocery chain, large retailing stocks plunged 15%, with some grocery retailers falling as much as over 20% in the aftermath. Every time an analyst or journalist speculated on a new segment of the market that Amazon was looking to enter next, stocks in that sector would be massively sold off. In six years, between March 2015 and the middle of last year, Amazon stock was up more than tenfold. Though the company was barely profitable and its stock was overvalued, in the eyes of its fans, it could do no wrong.

These days, it seems the e-commerce icon isn’t getting much right. Over the past year, it has been a laggard among big tech stocks. On April 28, the company reported a loss of US$3.8 billion (RM16.7 billion) — its first quarterly loss in seven years. It lost US$2 billion in costs during the quarter due to excess capacity, another US$2 billion due to operational inefficiencies and surplus labour, and US$2 billion more from higher inflation. Investors hammered its shares. Amazon stock tumbled 24% in April alone — its worst month since the 2008 global financial crisis — and is down another 15.4% this month.

To be sure, e-commerce, until recently one of the most promising areas of the global digital economy, has been showing clear signs of weakness following two years of incredible gains during the pandemic. With its urgent delivery prowess, Amazon was the perfect lockdown play. As the reopening takes hold, people are more comfortable doing most of their shopping in malls and grocery stores rather than on their smartphones or laptops. Supply chain bottlenecks have hit online shopping players as hard as physical retailers. Higher fuel prices make home delivery more expensive. Labour shortages are pushing wage costs higher. There are 5.9 million unemployed people in the US and 11.6 million job openings. According to the US Commerce Department, non-durable products, or the kind of things Americans buy on Amazon, were down 0.6% in the last quarter.

Are e-commerce’s days of heady growth now over, or do players like Amazon still have tailwinds that might propel them to new heights once inflation, interest rate and supply chain worries and the Russia-Ukraine war are in the rear view mirror?

To understand what is happening with Amazon, look no further than the e-commerce stock-market carnage over the last 18 months. Amazon shares are down 45% from their peak in July last year. Pandemic darling Etsy Inc, which sells handmade or vintage items, has seen its shares slide 76% since November; consumer-to-consumer e-commerce player eBay Inc’s shares are down 43% from their October highs, while online furniture platform Wayfair Inc’s shares have tumbled over 84% from their August 2020 peak.

Shares of Chinese e-commerce counterpart Alibaba Group Holding Ltd have plunged 76% from their late-October 2020 peak when its fintech affiliate Ant Group’s initial public offering in Hong Kong was hastily withdrawn on the orders of regulators. Other Chinese online retailers have not done much better. JD.com Inc is down 55% from its peak in February last year while shares of China’s No 3 e-commerce player Pinduoduo Inc have slid 87% from their peak 15 months ago. South Korean e-commerce giant Coupang Inc, whose shares popped up to US$55 in the week of its IPO in March last year, has seen them plunge 82% from their peak, while Latin American online retailer Mercado Libre Inc’s stock is down 68% from its highs in January 2021. Pan-African e-commerce operator Jumia Technologies AG’s shares are down 93% from last year’s peak.

In Southeast Asia, shares of the recently listed Indonesia e-commerce and ride hailing conglomerate PT GoTo Gojek Tokopedia tbk have fallen 49% from their post-IPO highs in March. Its rival, PT Bukalapak.com tbk, which listed last August, has seen its shares slide 76% from their post-IPO peak last August despite a recent rebound. Singapore-based Sea Ltd, which owns Shopee, has plunged over 84% from a high of US$372.70 last October.

Clearly, investors around the world are now unwilling to pay the ridiculous valuations the market once ascribed to e-commerce players. Amazon still trades at 55 times next year’s earnings compared with a market multiple of just under 17 times for the rest of the S&P 500 companies. Aside from Chinese e-commerce firms whose profits have plummeted over the past year, none of the other listed e-commerce firms are likely to turn a profit in the foreseeable future.

Pure-play e-commerce stocks are not the only ones getting hit. Companies that facilitate online shopping are also bearing the brunt of the slump in online shopping. Package delivery players FedEx Corp and United Parcel Service Inc, or UPS, as well as e-commerce-focused logistic players GXO Logistics Inc and XPO Logistics Inc, have been hit hard, as are firms that own and rent warehouses and fulfilment centres. The stock of global logistics real estate investment trust Prologis Inc, which counts Amazon as its largest customer, peaked just two weeks ago and is down 29% since. Ottawa-based global e-commerce enabler Shopify Inc, which helps physical stores transition to a multi-channel strategy by providing them tools to build online shopping platforms, has seen its shares hammered 82% since they peaked last November.

Amazon was the original internet darling. Jeff Bezos, a former investment banker in New York, uprooted his family and moved to Seattle because he thought he could make money selling books online. During the dotcom boom, Amazon was the yardstick against which all other internet players were judged. After the bubble burst, its stock plunged over 95% to just over US$3.50 a share and Amazon was literally weeks from bankruptcy. But Bezos persevered, turned the online bookstore into “Everything Store” — a platform where you can buy everything from the US$10 million Blossom Dance painting or million-dollar jewellery to cheap toilet paper. Unlike Apple, Microsoft and Google which are truly global players, nearly 70% of Amazon’s business still comes from the US.

For nearly a decade now, the key growth driver for Amazon has been its cloud infrastructure business, or Amazon Web Services, rather than its better-known e-commerce business. AWS is still going gangbusters and reported revenue growth of 37% in the last quarter. AWS actually does all the heavy lifting and provided over 60% of Amazon’s profits in the last quarter even though it accounts for just 22% of its total revenues. Still, the opportunity for Amazon in the cloud space is huge. UBS expects the global cloud services market could double over the next few years to over US$600 billion. If Amazon can maintain something close to its current market share, its cloud services could be a US$200 billion annual revenue business by 2024.

So, what went wrong? Amazon’s forte was its ability to focus on the future. It built huge capacity in anticipation of demand. As the pandemic broke out in early 2020, the e-commerce powerhouse went on a hiring spree, adding 600,000 workers, most of them in warehousing and fulfilment. Indeed, it doubled the size of its warehousing infrastructure during the pandemic years. Now as the world opens up and people return to physical stores, malls and supermarkets rather than shop online, it turns out that it had built far too much capacity. It has too many workers, too much warehousing space, too many vans that are not filled to the hilt racing around making urgent home deliveries of things people don’t immediately need.

Amazon once had the best logistics and fulfilment capabilities and no other online retailer came close. Over the past few years, competitors like Wal-Mart, Costco and Target have built delivery capabilities that are as good as, if not better than, Amazon. Moreover, goods you buy from Amazon aren’t cheap. If you shop online for instant coffee from Amazon, Costco and Wal-Mart, you might find Amazon is the most expensive. Moreover, it does not have the same variety of coffee available on its platform as its rivals. When Amazon was the only online retailer that promised next-day or same-day delivery, you didn’t mind paying a slight premium for a jar of instant coffee. Now, there are other players doing almost as good a job. Why pay Amazon more to get the same goods?

Amazon offers free same-day or next-day shipping for its 220 million Prime customers in many of its developed markets. You also get a bunch of movies and TV shows for free as a Prime customer. Prime membership fees were recently increased from US$119 to US$139 a year. That’s US$30.8 billion in subscription fees before it has even delivered a single item. Subscriptions from Prime as well as Amazon Music now make up 7% of Amazon’s total revenues. Over half of all North American households have a Prime membership and 95% of them say they will not cancel it after the recent hike.

One recent growth driver for Amazon has been advertising services, which make up another 7% of its revenues. Two years ago, the company catapulted to become the No 3 player in advertising behind Google and Meta Platforms, which owns Facebook, Instagram and WhatsApp. But growth in the ad business, which was 50% to 60% a year before the pandemic, is now starting to slow. Ad revenues in this past quarter grew just 23% over same period last year, a deceleration from 33% growth in the previous quarter and 52% in July-September 2021.

Last quarter’s results look bad because Amazon had to write down US$7.6 billion on its 20% stake in electric vehicle (EV) start-up Rivian Automotive Inc, which listed through a SPAC, or special purpose acquisition company, merger in November. With the stock touching US$179.47 per share in the aftermath of the merger, Amazon’s Rivian stake was valued at US$35.8 billion. The value of that stake has since been cut to just over US$4 billion as Rivian stock has collapsed. Ford Motor Co, the other major shareholder in the fledgling EV maker, began selling down its own stake when Rivian’s 180-day post-IPO lock-up period expired last week. Unless Rivian shares rebound, Amazon might need to write down US$24 billion more on the value of its stake.

But distractions like investment write-downs aside, Amazon remains a formidable behemoth that other competitors will find hard to keep up with. The company is seen as a key beneficiary of digital transformation. It remains laser-focused on slowing down spending and improving margins, which in turn should help improve profitability. The huge cash flow from its cloud services business will help fund the growth of its other businesses.

Amazon continues to invest heavily in warehousing, same-day or next-day home delivery and building up a big library of entertainment content for the free Prime Video service. Just last month, it completed the US$8.5 billion purchase of Hollywood studio MGM. Among other things, MGM owns the James Bond movie franchise.

MGM might be the last big purchase that Amazon makes. Regulators do not want the company, which has 44% share of America’s e-commerce business, to grow too dominant. A slowdown like the one the world is currently going through with higher inflation and higher interest rates is often a boon to established larger players, which can take market share and lure talent from weaker rivals. Amazon has talked about expanding in healthcare and robotics, and the Rivian investment was part of its efforts to dip its toe into autonomous vehicles. There is still plenty of room for it to grow in its core e-commerce business. Online shopping makes up just 10% of all retail sales in the US compared to 35% in China.

Assif Shameen is a technology writer based in North America