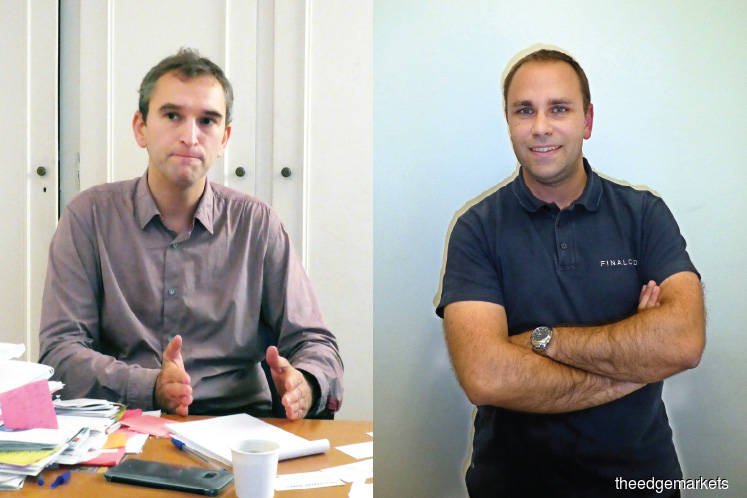 WHILE exposure to technology is useful, smartphones and tablets have become the bane of parents trying to prevent their children from spending too much time online and from a young age. But to tech start-ups like Xooloo SAS and Finalcad SAS, these mobile devices present opportunities that were never thought possible before.

Xooloo, for one, has made helping parents train their children to manage their digital time its business.

The French software company, founded in 2000 by siblings Gregory (the CEO) and Aurore Véret, has developed an application that allows parents to connect, assist and accompany their child at every stage of their digital life without being intrusive.

According to its chief development officer Yves Le Jan, Xooloo started out by focusing on the business-to-business (B2B) market, offering solutions to telecommunications operators and, later on, retailers to help families deal with the use of online technologies by their children.

“The idea was to create a solution where parents can leave their children unattended in front of a computer, without worrying about inappropriate content appearing on the screen,” he told Malaysian journalists at the company’s headquarters in Paris, France, recently.

At some point, Xooloo shifted its focus from a pure B2B to a business-to-consumer (B2C) company, developing apps for mostly Android devices.

“What we initially did was to set up a simple mechanism with which parents can decide how long their children can use their devices a day. So, the clock ticks every time the child uses his or her tablet and when the time is up (and before the device is disabled), the child is notified with a sad virtual face on the screen,” says Le Jan.

“We then started developing more sophisticated solutions, targeting mostly Android devices because that is more convenient as a platform than the iOS, given Apple’s restrictions.”

In September last year, Xooloo launched the Xooloo Digital Coach app that is aimed at mobile users aged 10 and above. It retails at €2.99 per month and monitors just one device or at €6.99 per month for an unlimited number of devices.

“Xooloo Digital Coach keeps a record of the apps children use on their phones and how much time they’re spending on those apps,” explains Le Jan. “That statistic is then compared with the usage of other children in the same age group in order to come up with an average so that the children can benchmark themselves against their peers and parents can then use the app to lay down rules.

Le Jan adds that the idea is to gently help children realise that sometimes they use their phones too much and have to let go a little bit. “As for the parents, we try and get them to set realistic goals when setting up controls on their children’s devices, using the average of other children. But the parents have the final say on the daily quota of use they set in their child’s device.”

Nevertheless, Xooloo Digital Coach does not allow parents to set up a global quota, such as an hour a day for all apps on the mobile device, but that’s by design, Le Jan says.

“Feedback from psychologists suggests that it’s a bad idea to mix everything, especially the value of using the devices. It is extremely diverse what children are doing on their phones. For sure, they are spending a lot of time watching YouTube and games but they also use their phones as an alarm clock, a Walkman and go online to do a bit of research. They could read books as well. So, mixing all of the uses into one bracket doesn’t make much sense,” he notes.

Le Jan says the app is aimed more at helping children manage their online time rather than letting parents monitor every aspect of their children’s digital lives. “We are not here to spy on children or report what they did because we feel that is one step too far.”

Xooloo is now looking for a partner to help it gain a foothold in the international market. The app is available in French and English.

“One of the potential markets we are targeting is the US, which currently makes up about 15% of our worldwide user base through our own marketing efforts there,” says Le Jan.

“Partnerships would probably be a cheaper way of expanding internationally but we could also try and drive (subscriber) acquisitions ourselves using digital marketing. That is mostly looking towards venture capitalists for funding.

“We know there is a lot of interest coming from Asia. For us, it is an opportunity. If a local partner in a particular country is interested, we will leverage the partner to expand our presence in that territory,” Le Jan says, referencing the company’s partnership in Nigeria.

“Our local partner in Nigeria has been successful, which is encouraging us to take a closer look at other African markets. This again will probably be through partnerships because we cannot be everywhere.

“The feedback I get from friends living in Asia is that Asian children start using mobile devices at a younger age than here (France). Our target age group is children who get their first phones, typically aged 10 or 11. The majority of our app users are between 10 and 13.

“After 13, we feel it’s time to give children some leeway to grow up. Frankly speaking, if you start using a solution for parental control on a 15-year-old, it is a bit too late.”

Le Jan declines to disclose financial information about Xooloo, saying it is not a public company, but he reveals that it is profitable and has 200,000 subscribers worldwide.

“The company now employs 12 people. We try to keep the organisational structure lean and focus on developing the products and let other people do the sales,” he says.

The advent of smartphones and tablets has also opened up new opportunities for Finalcad, which has come up with an app that allows architects, contractors and subcontractors to collaborate on every step of their construction projects. The Paris-based technology company was set up in 2011 by three entrepreneurs: CEO Jimmy Louchart, Joffroy Louchart and David Vauthrin.

“Before founding Finalcad, two of the three co-founders had another company that was mainly engaged in training for the construction industry. The duo conducted many video tutorials, taking pictures and videos to document the bad and good practices in the construction sector between 2007 and 2011,” Finalcad marketing director Aurélien Blaha recalls.

The emergence of a new generation of handheld devices, such as the iPad, has presented new openings for the co-founders. “From past experience, an idea emerged among the co-founders to digitise the construction process, such as defect management and quality control methods,” says Blaha.

He points out that the global construction industry has a big productivity issue. “It’s the only industry that has seen its productivity decline over the past 50 to 60 years while the productivity of other industries has been progressing. Often, you get news that a project was delivered two years late or faces budget overruns or that its quality is not good. We believe that digitisation is one of the answers to the issue.”

“We are digitalising the construction industry using many mobile apps for people on the field. We do this for all kinds of projects, whether housing, stadiums, hospitals, offices, towers or infrastructure such as roads, rail, civil engineering and bridges. Our main customers are general contractors and developers.”

Finalcad is no stranger to Asia, having established an office in Singapore two years ago with about 20 people to cover the markets in Southeast Asia, South Korea and Japan.

In Malaysia, the company was involved in projects such as Berjaya Central Park, the Matrade Exhibition Centre and housing project Eco Majestic in Iskandar Malaysia.

The Finalcad app helps contractors, architects and project owners save time and cost and increase productivity and quality. “In terms of cost, contractors can save about 5% to 10% of their budget for buildings and 10% to 20% for infrastructure,” Blaha says.

Today, 70% of Finalcad’s revenue comes from Europe and the remainder from Asia. “By the end of next year, we hope to have equal contribution from the European and Asian markets. We are launching an office in Tokyo at the end of the year,” says Blaha.

Since its establishment six years ago, the company has secured over €22 million of funding from investors, including Serena Capital, Aster Capital and CapHorn Invest, and is now preparing for its third round of fundraising.

“We are targeting to have the roadshow start in January, which will involve six to eight months of meeting investors. For the next round of funding, we are targeting Asian investors,” says Blaha.