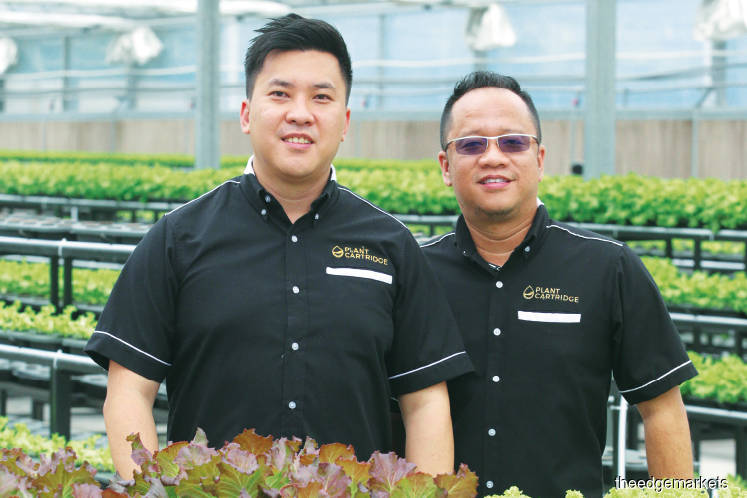 Currently exporting: Yes, to Singapore, Thailand and the Philippines

Industry challenges: A lack of standardised processes to lease land for agriculture, a lack of knowledge workers and a lack of awareness of the importance of sustainable agriculture.

In about 30 years, the world’s population is expected to exceed nine billion people — a growth of more than 30%. In other words, there will be 2.3 billion more mouths to feed.

Less developed economies such as North Korea and Cuba are already grappling with severe food shortages. Countries on the African continent remain the epicentre of hunger, with 676 million suffering from a lack of food.

That is why agriculture technology (agritech) firm Plant Cartridge Sdn Bhd has developed a growing kit to enable sustainable urban farming at home. Now, it is utilising its knowledge for the growth of smart industry-scale farms in response to an insatiable demand for safe and sustainable food produce.

“Farming is all about control. We need to embrace technology to take the tedious and unpredictable components out of farming,” says Plant Cartridge CEO Liang Chan Ning.

“In Asia-Pacific, the mindset is still very traditional when it comes to farming. A farm is still observed as just a farm, and not a factory, because labour is still cheap, land is ample and waste is not a problem the man in the street has to deal with — yet.

“So, it took us awhile to get a forward-looking partner who believes in the deployment of technology and understands the need for a longer timeline over immediate profits.”

By collaborating with Cultiveat Group Sdn Bhd, another innovative agritech company, Liang and his team have been able to industrialise their humble growing kit. It is based on the simple science of hydroponics but refined and upgraded using a one-step soilless growing method. This method of farming utilises fewer resources and produces better quality, affordable and, most importantly, safe to consume local crops compared with industrial farms.

The current venture with brothers John-Hans and John-Ian Oei of Cultiveat involves the extension of Plant Cartridge’s existing business and the former’s expertise in developing and managing industrial farms. Plant Cartridge provides the technology, which includes its highly successful growing kit — a 2ft-long covered rectangular ultraviolet-coated polyethylene tank that has holes to fit eight pods that contain select seeds and growing medium as well as a hole in the centre for irrigation purposes.

Meanwhile, Cultiveat worked on clearing the land it owns and is in the process of constructing greenhouses on a two-acre plot at the edge of Kapar, which is less than 3km from the coast of the Straits of Malacca. It already has a greenhouse on a plot of land in Klang, where it is growing 18 types of lettuce. This is no mean feat as those leafy vegetables thrive at a cooler temperature of 15°C while Klang is a sweltering 26°C.

Liang explains that in the greenhouse, it controls temperature, humidity, irrigation and pests. The cartridge itself is used to control germination.

“We have multiple sensors to control the humidity, amount of light and temperature in the greenhouse. If I want to maintain the temperature at 27°C, with 70% humidity and 20,000 lux of sunlight, the greenhouse will automatically adjust,” he says.

This set-up is energy-efficient. For instance, it has an underground reservoir, where the groundwater is maintained at 21°C to 25°C, so it is naturally chilled. It uses a small amount of electricity to pump the water up. And the sides of the greenhouse are designed to look like a massive carburettor so that the high pressure outside will push the cool air in.

Liang says it also deals with pests without resorting to pesticides. “We keep the farm clean and draw insects away from crops by using flowering shrubs as a decoy. It is simple logic — if your house is clean, it will be devoid of pests. And when the plant is strong, it resists pests naturally.

“We practise intensive farming. Although it is on a smaller scale, we have the same or greater output than large farms. If you are working on a big open plot, the externalities are harder to manage, so farmers have to use pesticides or risk losing their crops. In a controlled environment, we are able to minimise the externalities.”

Plant Cartridge’s judicious use of technology allows it to grow a variety of crops, many of which can only be grown in countries with more temperate climates. “In our one-acre set-up, we can generate two to five tonnes of vegetables, depending on the crop. This farm was built to mimic a factory and factories aim at continuous production. So, once we harvest one round, we can move on to the next without much effort,” says Liang.

For instance, in a traditional farm, farmers fill poly bags and manually transport them to the ground and wait for the seeds to germinate. They need to continuously monitor each plant.

“If you are going to plant tomatoes, for example, you need to have big poly bags. One bag [with soil] weighs around 5kg and on one acre, there are 8,000 to 9,000 plants. Can you imagine how strenuous it is to manually fill the bags and transport them to the location? It is tedious and that is why no one wants to be a farmer,” says Liang.

Things are different when you use a cartridge. “All you need to do is add water and watch the plants grow,” he points out.

When the plants are ready to be harvested, the tank is moved elsewhere. “Harvesting is just a matter of unplugging the vegetables and packing them up for deployment. Operators such as Cultiveat are able to save up to 20% of their time using our system and this could increase once we figure out how to automate the moving and harvesting of the plants,” says Liang.

Cultiveat and Plant Cartridge are currently focused on growing lettuce and tomatoes at their Kapar plot. These harvests are supplied to businesses in the food and beverage industry, including homegrown burger chain myBurgerLab.

Liang believes that with the use of technology, the future of farming is bright. Once there are solutions to address the more menial and tedious tasks, more people will aspire to be farmers, he says.

It also helps that the demand for safe foods far exceeds the supply at the moment. According to Liang, the safe food market in Asia-Pacific is worth US$28 billion.

“To capture this market and provide accessibility to people, we need to have multiple production models. Home users [those using our cartridges] are one part of that plan and small farmers are another,” he says.

The partners are in negotiations with parties in Thailand, Singapore and the Philippines to implement something similar in those countries. Plant Cartridge will work on the technology while Cultiveat will plan and manage commercial farms for local food needs.

Malaysia was No 40 on the Global Food Security Index last year, according to the Economist Intelligence Unit. That is because the country relies heavily on imports to feed the local population of 32.6 million.

What kind of support is the company looking for locally? Liang says it needs land to achieve its mission of improving Malaysia’s position in terms of food security.

“We need the government to reduce the red tape. We managed to work on this parcel of land because of Cultiveat and the process was quite straightforward. But when we applied for land on a leasehold basis from the government, it was not easy and the process was too slow. We are not asking for funding, just land, so that we can train a new generation of farmers or agricultural specialists,” he adds.

“We need the government’s assistance to raise awareness too. A lot of the graduates we work with lack technological know-how. We need to work with the government to look into this so we can cultivate a pool of highly skilled and knowledgeable farmers.”

The adoption of innovative science-based solutions is crucial because the demand for safe food is 100 times more than the supply, says Liang. He points out that crops grown using these more advanced practices are of better quality, are more competitively priced and have less wastage.