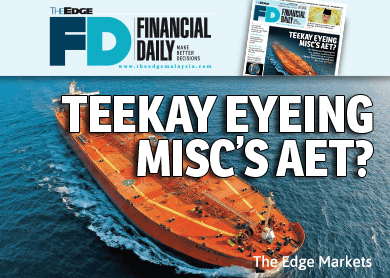 “MISC is not in a position to comment on Teekay’s business plans,” the shipping company’s corporate communications arm responded when asked to verify news reported by Oslo-based shipping press Tradewinds.

Last Friday, international shipping publication Tradewinds speculated that Teekay chief executive Kevin Mackay had conducted discussions about an acquisition but it is not clear how receptive MISC has been.

Tradewinds further suggested that Mackay would probably be the fuelling factor of this deal as he is a former high-ranking official at AET — serving as its Houston-based regional director from 2005 until 2009.

“Taking in AET would be no small feat. The owner has 60 tankers in the aframax, suezmax and VLCC (Very Large Crude Carrier) classes that are currently valued at US$2.5 billion (RM9 billion) by online platform VesselsValue.com. The fleet averages nine years old and is of 8.7 million deadweight tonnage (dwt) in aggregate,” Tradewinds reported last week.

Aframax and suezmax are tankers that are widely used for lightering service, a process of transferring cargo from a larger vessel such as VLCC in order to make deliveries to ports that are unable to accept very large, ocean-going vessels.

While MISC’s cash and cash equivalent stood at RM4.84 billion as at Dec 31, 2014 (4QFY14), it is understood that the idea of disposing of AET is unlikely to be driven by cash flow purposes. Nevertheless, a quick check with the Companies Commission of Malaysia revealed that AET’s tanker businesses did not seem promising up to 2013.

Loss after tax has been above RM550 million for three consecutive years from FY11 to FY13, while accumulated profit carried forward has been on a downtrend in the same period from RM2.91 billion in FY11 to RM1.61 billion in FY13.

Back in May of 2003, when MISC acquired AET (then known as American Eagle Tankers) the Petroliam Nasional Bhd-controlled company forked out US$445 million in cash for AET, and it funded a US$75 million dividend from AET to Neptune Orient Lines, the company which owned AET.

When MISC acquired AET, the latter had 29 Aframax tankers (22 owned and seven chartered-in) and two VLCCs. It increased MISC’s fleet to 37 Aframax tankers and three VLCCs.

MISC has made several major disposals over the last few years, including the sale of its bulker arm, and more recently in 2011 its container shipping business.

It has also attempted to dispose of its entire stake in MISC Integrated Logistics Sdn Bhd to Golden Age Logistics Sdn Bhd (GAL), but this was called off in January this year because GAL was not able to fulfil its obligations under the deal, valued at RM250 million. GAL is a wholly-owned subsidiary of Utusan Printcorp Sdn Bhd, which in turn is a 40%-associate of Utusan Melayu (Malaysia) Bhd.

This article first appeared in The Edge Financial Daily, on April 21, 2015.