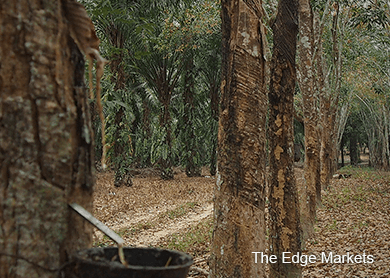 TOKYO (Sept 3): Benchmark Tokyo rubber futures settled down 1.2% at their lowest in more than six years on Thursday, erasing early gains on lingering concerns over weaker oil prices and a sluggish Chinese economy.

Trading in Tokyo Commodity Exchange (TOCOM) futures, which set the tone for tyre rubber prices in Southeast Asia, was largely quiet as market participants kept to the sidelines, with Chinese markets closed on Thursday and Friday.

"The market responded to a paring of strong Nikkei gains," a source with a Tokyo-based dealer said, adding that the market could come under further pressure amid a lack of support.

The U.S. dollar was quoted around 120.43 yen, having rebounded from overnight, as global investors tentatively stepped back into equities, tempering demand for the Japanese currency.

The front-month rubber contract on Singapore's SICOM exchange for October delivery last traded at 122 U.S. cents per kg, down 1.7 cent.