LAST WEEK saw a rash of weaker than expected economic data out of the US. This has given the stock market rally pause as investors reassess the state of the world’s largest economy.

On Wall Street, the Dow Jones Industrial Average suffered consecutive days of losses and is already down 2.8% (as of last Thursday’s close) in this very short new year. Similarly, the broader-based S&P 500 index is in negative territory, down 3.2% for the year-to-date.

On the other hand, the full impact of these headline numbers is yet to filter down to the average man on the street. Recently released revised retail numbers for 4Q14, which were weaker than expected, underscores what has been a sluggish recovery thus far.

There are several reasons for this including the widening income inequality and composition of this economic recovery. But one of the key contributors is the fact that households are shifting their decisions from consumption to financial security. Damaged household balance sheets take time to repair. Coupled with modest wages growth, so far, households are now more inclined to pay down borrowings and increase savings rather than spend it.

That’s not to say the US recovery is faltering. It is happening and will continue to gain traction. Certainly, the US is in a better place than most of the developed world, specifically Europe and Japan. It’s just that exuberance over the recovery has been overdone and expectations are being pared back. Falling oil prices will temper inflationary concerns. As such, even though the US Federal Reserve is still widely expected to start raising interest rates sometime middle of this year, it will more than likely be slow and gradual.

Notably, yields on the benchmark 10-year treasury note have fallen below 1.8%, the lowest since April 2013 and well off the high of over 3% at the height of “taper tantrum”.

In short, the flow of capital is still going into greenback-denominated assets. But the upside for emerging markets is that whilst the capital flow is unlikely to reverse, the pace and intensity has moderated. This gives me hope that we may even witness a Chinese New Year rally, albeit one that could be quite modest. The days of liquidity driven asset prices is over.

In fact, judging from recent spate of promotional ads by banks, there appears a shortage of liquidity in the local banking system. Board rates for fixed deposits have remained essentially unchanged. But banks are giving far higher rates to attract “fresh funds” with limited time period offers.

I put some cash to work last week. I bought more shares in Willowglen and Pintaras and also bought 9,000 shares in WellCall for a combined RM60,120. Having reduced my cash holding to RM49,071, my portfolio is now 75% invested.

I remain convinced on upbeat outlook for Willowglen and Pintaras. Willowglen has good growth prospects and an asset-light business model that is highly scalable. With some 83% of revenue derived from Singapore, the company will also benefit from the strengthening Singapore dollar. The stock is modestly valued at less than 10 times historical earnings and high ROE of 24.5%.

The company undertook some upfront spending that affected earnings in the first nine months of this year. However, the additional expenses will translate into stronger earnings going forward. This will, in turn, drive valuations even lower.

With improved cashflow, I also expect steady dividends. Net yield was a decent 2.5% for the past 12-months. The Edge Research rates this company a Fundamental score of 2.55 out of 3.

Pintaras is a leading foundations and piling specialist that stands out for its consistent earnings growth, high margins and cash rich balance sheet. The Edge Research rates it a maximum Fundamental score of 3.

Over the past five years, revenue almost doubled from RM105.7 million in FY June 2010 to RM201.9 million in FY2014, while net profit rose from RM20.7 million to RM54.2 million. During that period, operating margin and net margins averaged 33.34% and 25.35%, respectively. The company will continue to do well on the back of sustained construction activities, supported by mega infrastructure projects, in the country.

WellCall is an Ipoh-based manufacturer of industrial rubber hoses used across a broad swath of the economy — for air and water, welding and gas, oil and fuel, automobile, shipbuilding as well as food & beverage sectors. The company will benefit from lower rubber costs and the weak ringgit. Almost 91% of sales are exported, to all over the world. The Edge Research rates WellCall a maximum Fundamental score of 3 and 2.1 out of 3 for Valuation.

The company also pays pretty good dividends. Dividends totaled 11 sen per share in the past 12 months, earning shareholders a net yield of 4.9% based on current price.

My portfolio did better than the broader market last week, gaining 3.76% compared with the benchmark index’s 0.64% increase. All seven stocks in my portfolio ended higher for the week. Willowglen and Complete Logistics were the two biggest gainers.

Total value for my portfolio is now up 1.4% since inception. My portfolio out-performed the benchmark index, which has fallen by 4.7% over the same period. For the benefit of new readers, my Value Investing Portfolio will only buy stocks recommended by InsiderAsia. For new stock ideas, please visit The Edge Markets at www.theedgemarkets.com. 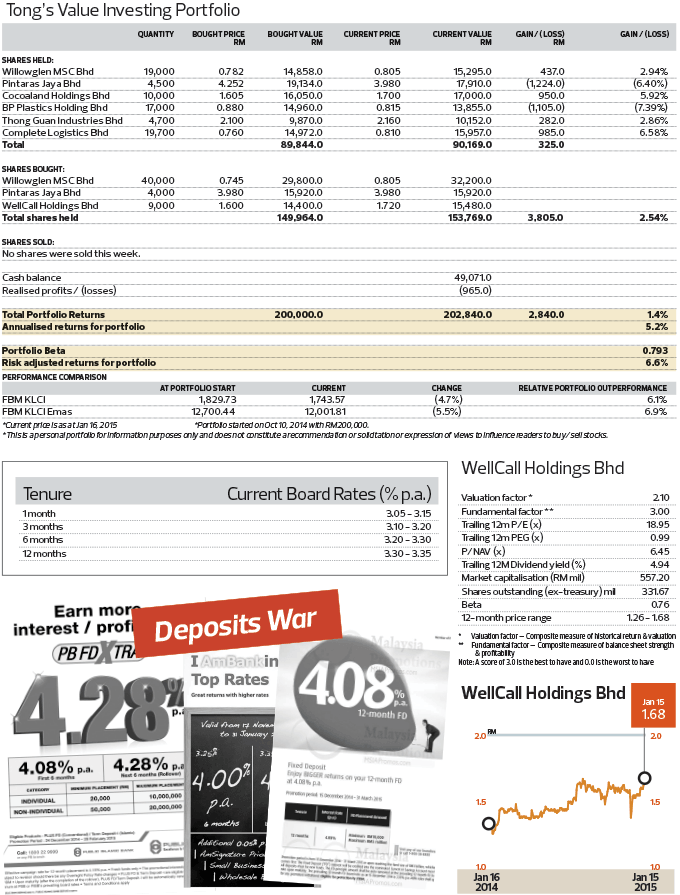