Top Glove and Kossan rebound after recent sell down 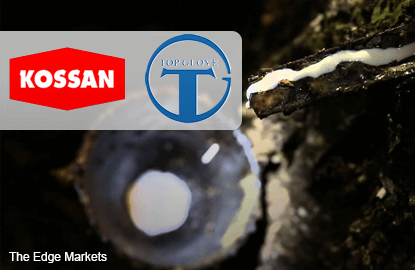 When contacted, TA Securities analyst Wilson Loo said the recent sell down of Top Glove and Kossan had been overdone due to poor market sentiment on export counters, thus, it is time for correction.

He highlighted that investors have the perception US dollar's weakening is bad for the glove sector, but in fact, glove players have the ability to pass on their costs to consumers.

Therefore, he believes that the US dollar's weakening will only be a short-term pressure on both companies earnings.

Loo, however, sees Kossan as the top pick among the gloves sector, due to its earnings growth from expansion plans and its attractive valuation. He gave Kossan a target price (TP) of RM9.40.

Meanwhile, according to his report today, he maintained his buy call on Top Glove, with a TP of RM6.

However, due to recent (natural gas tariff hike) and imminent cost pressures (minimum wage), he believes that emulating its recent record 1QFY16 performance in the near to medium term, would be a challenging feat.

“We understand that raising average selling prices (in USD) to negate these cost pressures, may be difficult. Accordingly, we foresee margins to soften, moving forward,” he added.

According to Loo, Top Glove is still actively on the lookout for synergistic merger and acquisition opportunities, and it is making progress with its former manufacturing venture, which is expected to begin production by first half this year.