TOP GLOVE CORP BHD stands out from the glove makers listed on Bursa Malaysia because of its substantial investments in the property sector. It believes such diversification is value-accretive to a company of its size.

The founder of the world’s largest glove maker and its executive chairman, Tan Sri Lim Wee Chai, says it makes sense to explore other growth avenues, such as property, because the glove industry faces further margin compression due to a surge in supply and rising costs. 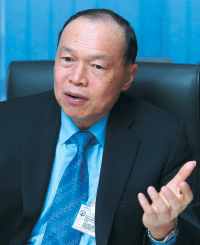 “For instance, we have some good property and land assets in Kuala Lumpur and Shah Alam. We have invested in many plots of land and over the past 20 years, our track record [in property investments] has been quite good,” he observes.

Top Glove’s new flagship building — the 23-storey Top Glove Tower in Setia City, Shah Alam — reflects Lim’s thinking. He says Top Glove will occupy only two floors of the tower and the rest will be leased out. The office building has a total lettable area of 240,466 sq ft over 14 floors and 26,564 sq ft of retail space over two floors (the other seven floors are for car parks). The total cost of the land and building is RM141 million.

The group also recently acquired a 1.5-acre plot adjacent to the tower for RM20.3 million. With Setia City Mall nearby and property price growth in the Setia Alam area, Lim believes the plot and the tower will be earnings-accretive over the long term. “For now, the plot is an investment. But it can be used for expansion if the need arises. We are not ruling out any options.”

Apart from Top Glove Tower, the group’s property leasing division has partial ownership of The Icon @ Tun Razak, The Mines 2, PJD Tower and several floors of office space in Empire Subang. These are all located in prime areas in the Klang Valley and offer good yield potential.

Compared with the group’s net profit of RM180.11 million for its financial year ended Aug 31, 2014, investment income was a modest RM15.83 million. But Lim is optimistic that Top Glove Tower can deliver strong recurring income to the group’s property division over the next few years.

Rental revenue from Top Glove Tower should be reflected in the investment income starting this year. Based on an assumed yield of 6% on the property cost of RM141 million, rental income could amount to RM8.5 million.

In the meantime, investors did not seem receptive to Top Glove’s diversified business portfolio.

The nimbler Hartalega Holdings Bhd and Kossan Rubber Industries Bhd made substantial investments in expanding their production capacity for nitrile gloves, which offer higher margins and are favoured by developed markets such as the US and Europe. They subsequently reported much higher earnings growth than Top Glove, which is the second smallest producer of nitrile gloves among the Big Four (the fourth member being Supermax Corp).

At around the same time, Top Glove’s vinyl glove operation in China ran into trouble while its move into rubber plantations in Sumatra, Indonesia, was criticised, given the oversupply of the commodity at present.

Lim admits that the group learnt some tough lessons in China but notes that the division recently returned to the black following the consolidation of its factories there. “When we started there 12 years ago, things were very good as we had the technology and capital to compete. But then, labour costs escalated and the local competitors quickly caught up with us. In fact, we learnt a lot from them and now, we are the ones who are transferring their technology to Malaysia,” he quips.

Lim also clarifies that Top Glove has no plans to exit the upstream business — rubber plantations — but will pare down its stake in the estates. He says the problem was not soil conditions or planting operations in the greenfield estates but pressure from the local stakeholders.

Top Glove acquired a 60-year concession to grow rubber trees on 30,773ha on two islands near Palembang, Sumatra, after buying a 95% stake in PT Agro Pramata Sejahtera for RM22 million in 2012. “We are looking for a local partner to help us. The main issue is that there was some resistance from the Indonesians to us developing the land there.” 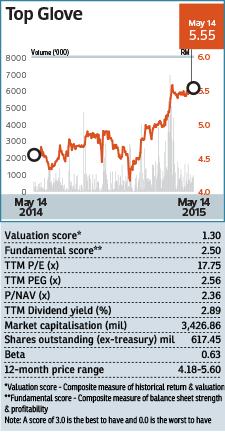 As for the company’s core glove business, Lim reiterates that the group has no intention of scaling back its latex segment, citing strong demand from emerging markets. At the same time, it is ramping up its nitrile capacity to give it a more balanced product mix. The mix at present is 70% latex, 25% nitrile and 5% vinyl.

“Profit margins from latex are still good because we have a dominant market share, and latex concentrate prices are in a low range. So, margins have essentially remained steady while nitrile margins will come down due to the ongoing supply growth,” Lim says.

He believes increased efficiency in Top Glove’s production lines will be enough to offset an increase in energy costs. Despite the government’s deferment of a tariff hike in gas prices earlier this year, it is inevitable, which makes the manufacturers vulnerable to a sudden drop in margins and, by extension, net profits.

“Even if energy prices rise, the technological improvements will reduce fuel consumption in manufacturing. We can save 20% to 30% in fuel costs from better automation and efficiency,” says Lim.

Note: The Edge Research’s fundamental score reflects a company’s profitability and balance sheet strength, calculated based on historical numbers. The valuation score determines if a stock is attractively valued or not, also based on historical numbers. A score of 3 suggests strong fundamentals and attractive valuations. Visit www.theedgemarkets.com for more details on a company’s financial dashboard.