Turn the other cheek, lose sight of the future

THE Selangor Islamic Religious Department (Jais) returned the Malay and Iban Bibles it seized unlawfully from the Bible Society of Malaysia (BSM) to representatives from Christians in Sarawak recently but it did not issue an apology. – Pic courtesy of the Selangor Menteri Besar’s Office, December 2, 2014.

Here is message to Christians in Sabah and Sarawak: end your delusion.

You cannot believe that a swathe of water and some Immigration powers can ring fence your states from the tide of religious intolerance, racism and chauvinism sweeping through this country.

You either team up with like-minded Malaysians who want to save this country from sliding further down the slope of extremism or be prepared to have your religious and other constitutional rights trodden like dried grass.

Sarawak folk believe that as long as Umno is kept out of the state, all will be well. Sorry to burst your bubble of naivete but that is short-sighted thinking at its worst.

Hundreds of thousands of Sarawakians work and live in the peninsula and have to submit to the increasingly oppressive religious and racial landscape.

For example, a few weeks ago, there were celebratory hugs when the Selangor Islamic Religious Department (Jais) returned the Malay and Iban Bibles it seized unlawfully from the Bible Society of Malaysia (BSM) to representatives from Christians in Sarawak.

There was no apology and the religious authorities did not even have the courage to admit that a mistake had been made or the decency to return the Bibles to BSM.

To compound matters, the Selangor religious authorities insisted that from now on, the Alkitab cannot be distributed in Selangor.

But there was not a squeak of protest from the Sarawak church groups. They happily posed for photographs and did not even understand the far-reaching consequences of their action to Sabahans and Sarawakians who work, study and live in the peninsula.

All they were concerned about was getting back the Bibles meant for Sarawak, pull up the shutters and keep the radicals out.

So what happens to the several hundred thousand Bahasa-speaking Sarawakians and Sabahans in Selangor if state religious authorities block the import of Bibles for their use?

Given the extreme position of Jais and the Selangor Islamic Religious Council (Mais), will Sarawakians in Selangor even be allowed to own an Alkitab?

Will other state religious authorities in parts of Malaysia also follow the position taken by Jais and prohibit the importation and distribution of Malay and Iban Bibles in their states?

And most of all, are the Christian leaders being fair to their own flock who flock to the peninsula for economic reasons and now have to practise their faith without their Alkitab?

Is this a case of turning one's cheek and losing sight of the future? If every state becomes a silo against others, what then is Malaysia and Malaysians? – The Malaysian Insider 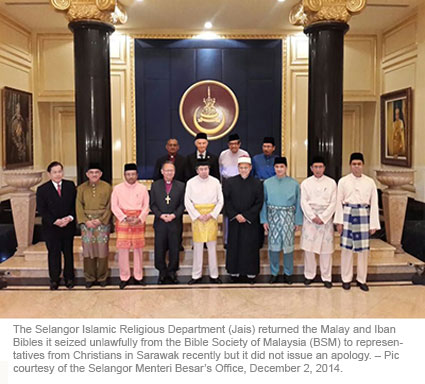