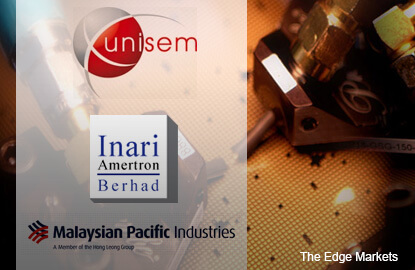 KUALA LUMPUR (Aug 4): Despite a 5.8% year on year (y-o-y) decline in global semiconductor sales in June this year, TA Securities Holdings Bhd remains positive on the sector, driven by expectations for a better second half of 2016 (2H16) in line with the touted iPhone 7 launch and the weak ringgit.

TA Securities said sales for 2Q16 saw an increase of 1% q-o-q, while m-o-m sales increased for the second consecutive month.

"The 1.1% m-o-m rise in sales was the biggest m-o-m growth in seven months. A modest rebound in sales is projected for the second half," it added.

Yesterday (Aug 3), data from US-based Semiconductor Industry Association showed that global sales for the month of June 2016 reached US$26.4 billion (about RM107 billion), an uptick of 1.1% over the previous month's total of US$26.1 billion but down 5.8% from the June 2015 total of US$28 billion.

TA Securities said a modest rebound in sales is projected for 2H16 as the World Semiconductor Sales Statistics expectation of semiconductor sales to decrease 2.4% y-o-y in 2016 implies a growth of 7.9% half-on-half or 1% y-o-y in 2H16.

The research firm maintained its "overweight" rating on the sector.