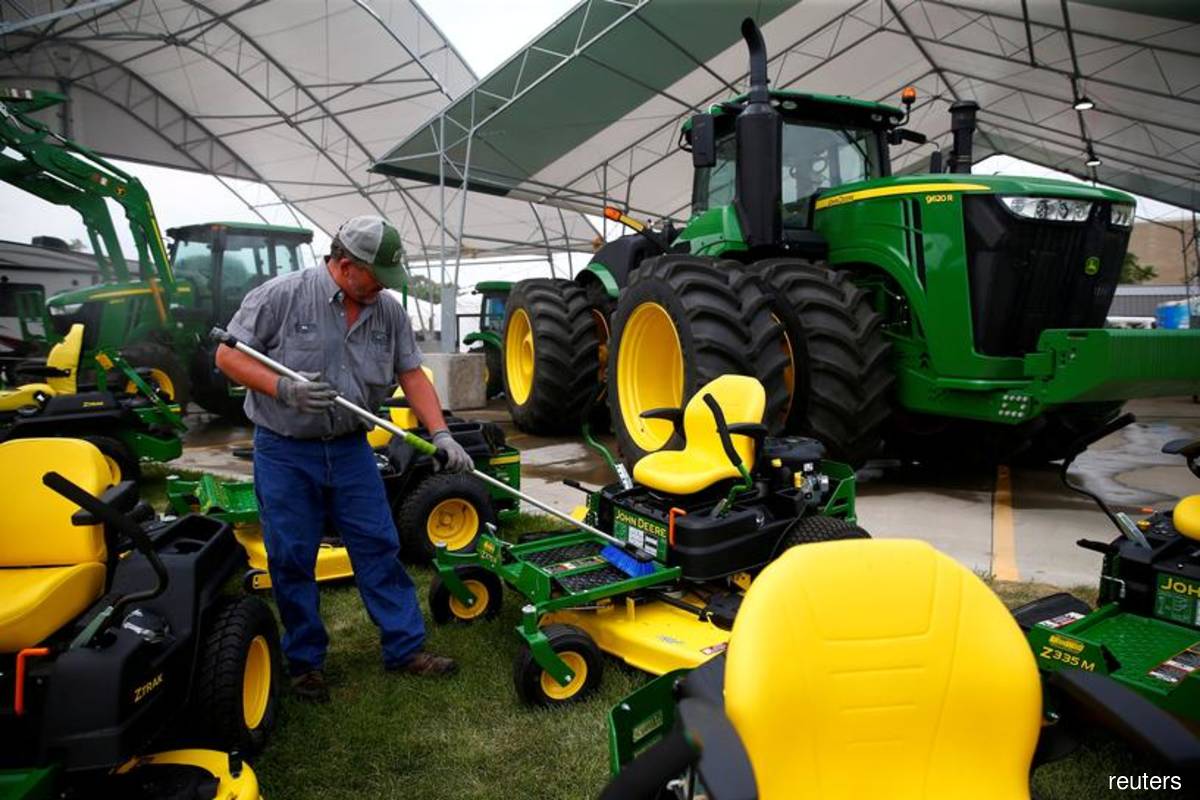 A man cleans farm machinery as people prepare for the Iowa State Fair in Des Moines, Iowa, US on Aug 5, 2019. (Photo by Eric Thayer/Reuters filepix)

Slower growth expectations were reinforced by other data from the Commerce Department on Wednesday showing the goods trade deficit widening sharply last month, with exports slumping. While wholesale inventories increased, stocks at retailers fell as supply at auto dealerships continued to decrease rapidly amid a global semiconductor shortage.

The reports, which came ahead of the government's snapshot of third-quarter gross domestic product on Thursday, had some economists ratcheting down their growth estimates. The economy is believed to have expanded at the slowest pace since the second quarter of 2020, when it suffered a historic contraction in the wake of stringent mandatory measures to contain the first wave of Covid-19 infections.

"The third quarter may be the weakest quarter for economic growth in over a year, but you would never know it looking at business capital spending setting records this month," said Christopher Rupkey, chief economist at FWDBONDS in New York. "Business is looking past the slowdown in consumer spending in the third quarter and betting consumers will return to the shops and malls later this year and clear the shelves."

There were increases in orders for machinery, primary metals and fabricated metals products. But orders for electrical equipment, appliances and components fell as did those for computers and electronic products, likely because of the worldwide chip shortage.

Business spending on equipment has recorded double-digit growth for four straight quarters. While economists expect another strong quarter in the advance third-quarter GDP report on Thursday, the pace probably moderated because of the acute motor vehicle shortage, which has undercut auto purchases.

High inflation due to strained supply chains is seen eating into the growth in equipment investment.

"Squaring this nominal increase in shipments with the run-up in producer prices for private capital goods takes away some of the optimism," said Tim Quinlan, a senior economist at Wells Fargo in Charlotte, North Carolina.

Stocks on Wall Street were mixed. The dollar slipped against a basket of currencies. US Treasury prices rose.

The Covid-19 pandemic shifted demand towards goods, as well as causing severe labour disruptions, resulting in unprecedented bottlenecks in the supply chain, which economists and businesses expect to persist through the first half of 2022.

The backlog of core capital goods hit a record high in September. That should keep manufacturing, which accounts for 12% of the economy, humming.

Orders for durable goods, items ranging from toasters to aircraft that are meant to last three years or more, fell 0.4% after advancing 1.3% in August. They were weighed down by a 2.3% decline in orders for transportation equipment, which followed a 3.8% jump in August. That largely reflected motor vehicle shortages, which resulted in orders declining 2.9% after tumbling 3.9% in August.

Orders for the volatile civilian aircraft category plunged 27.9%, after soaring 63.9% in August. Boeing reported on its website that it had received 27 aircraft orders last month compared to 53 in August. Unfilled orders of durable goods rose 0.7%, after advancing 0.9% in the prior month.

The flow of goods has also been disrupted by the supply constraints. In another report on Wednesday, the Commerce Department said the goods trade deficit increased 9.2% to a record US$96.3 billion in September. Goods exports dropped 4.7%, with motor vehicle exports tumbling 2.0%.

Outside the shutdown in spring 2020, September was the worst month for motor vehicle production since 2010. There were also sharp decreases in exports of capital goods and industrial supplies last month. Goods imports gained 0.5%. But motor vehicle imports plunged 7.7%.

The wider goods trade deficit prompted economists at JPMorgan to lower their third-quarter GDP growth estimate to a 2.9% annualised rate from a 3.0% pace. Goldman Sachs trimmed its forecast by half a percentage point to a 2.75% rate.

Those estimates are within the range of forecasts in a Reuters' survey of economists, which predicted the economy growing at a 2.7% rate in the third quarter. That would be a step-down from the 6.7% rate notched in the second quarter.

Inventories were depleted in the first half of the year. Economists believe the pace of decline lessened in the third quarter, accounting for the bulk of expected GDP growth. Trade has been a drag on GDP growth for a year, while inventories have subtracted from output for two straight quarters.