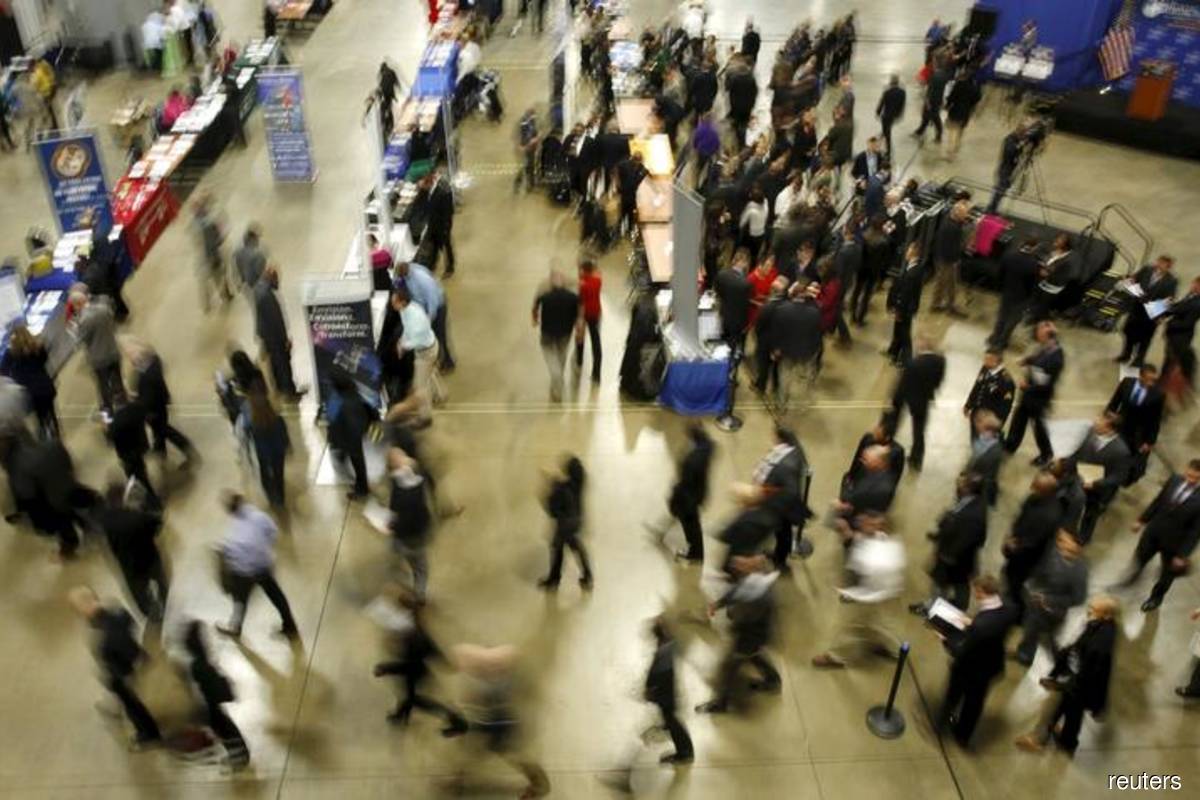 WASHINGTON (Nov 4): The number of Americans filing new claims for unemployment benefits fell to the lowest level in nearly 20 months last week, suggesting the economy was regaining momentum amid a significant improvement in public health, though supply constraints remain.

The tightening labour market is driving up wages as companies scramble for workers, contributing to keeping inflation high. Labour costs surged in the third quarter, other data showed on Thursday, with productivity sinking at its steepest pace in 40 years. The Federal Reserve announced on Wednesday (Nov 3) that it would this month start scaling back the amount of money it is pumping into the economy through monthly bond purchases.

"Firms are reluctant to lay off workers with strong demand and labour in short supply," said Gus Faucher, chief economist at PNC Financial in Pittsburgh, Pennsylvania. "The big open question is what is happening to the millions of people who lost their benefits in September, or saw their benefits drop."

Initial claims for state unemployment benefits fell 14,000 to a seasonally adjusted 269,000 for the week ended Oct 30, the Labor Department said. That was the lowest level since the middle of March in 2020, when mandatory business closures were being enforced to slow the first wave of Covid-19 infections. Claims have now declined for five straight weeks.

There were significant declines in filings in Missouri and Florida, which offset increases in California and Kentucky.

Claims in Kentucky were likely boosted by temporary layoffs in the automobile sector, as motor vehicle manufacturers cut production because of a scarcity of semiconductors.

The summer wave of infections driven by the Delta variant has subsided, encouraging more Americans to travel, dine out, frequent sporting venues and engage in other activities that were curtailed by the resurgence in cases. The Delta variant and shortages of goods contributed to restricting economic growth to its slowest pace in more than a year last quarter.

Claims, which have declined from a record high of 6.149 million in early April 2020, are now in a range that is generally viewed as consistent with a healthy labour market.

The number of people continuing to receive benefits after an initial week of aid dropped 134,000 to 2.105 million in the week ended Oct 23, also the lowest level since the middle of March in 2020. The number of people receiving aid has declined by about 75% since early September, when enhanced government-funded benefits expired.

Falling claims augur well for October's employment report, which is due on Friday. According to a Reuters' survey of economists, nonfarm payrolls likely rose by 450,000 jobs. The economy created 194,000 jobs in September, the fewest in nine months.

Stocks on Wall Street were mostly higher. The dollar rose against a basket of currencies. US Treasury yields fell.

Expectations for an acceleration in job gains were bolstered by the ADP National Employment Report on Wednesday, which showed strong growth in private payrolls in October. The Conference Board's labour market differential — derived from data on consumers' views on whether jobs are plentiful or hard to get — hit a 21-year high.

But relentless worker shortages remain an obstacle. Caregiving needs during the pandemic, fears of contracting the coronavirus, early retirements and career changes, as well as an aging population left businesses with 10.4 million unfilled jobs as of the end of August.

Fed Chair Jerome Powell told reporters on Wednesday that "these impediments to labour supply should diminish with further progress on containing the virus, supporting gains in employment and economic activity."

There are concerns that the White House's vaccine mandate, which comes into effect on Jan 4 and applies to federal government contractors and businesses with 100 or more employees, could add to the worker shortages.

A report on Thursday from global outplacement firm Challenger, Gray & Christmas showed job cuts announced by US-based employers increased 27.5% in October to 22,822, the highest since May. It said 22% of the layoffs were people who refused to be vaccinated as required by their companies.

"The issue could push people out of the labour force or slow re-entry as people extend their searches for either employers not enforcing the mandate or workplaces where it doesn't apply," said Ryan Sweet, a senior economist at Moody's Analytics in West Chester, Pennsylvania.

With workers scarce, companies are raising wages. A second report from the Labor Department on Thursday showed unit labour costs, the price of labour per single unit of output, accelerated at an 8.3% annualised rate in the third quarter, after rising at a 1.1% pace in the April-June quarter.

Labour costs rose at a 4.8% rate compared to a year ago. The government reported last week that wage growth in the third quarter was the largest on record. Strong wage gains, together with rising rents, pose a challenge to the Fed's narrative that high inflation is transitory.

"The rise will add to concerns about inflation becoming more entrenched and/or the growing risk to profits, as businesses are not able to offset higher wage costs via productivity gains," said Sarah House, a senior economist at Wells Fargo in Charlotte, North Carolina.

Worker productivity fell at a 5.0% rate last quarter, the biggest drop since the second quarter of 1981.

A third report from the Commerce Department showed the trade deficit surged 11.2% to a record US$80.9 billion in September.