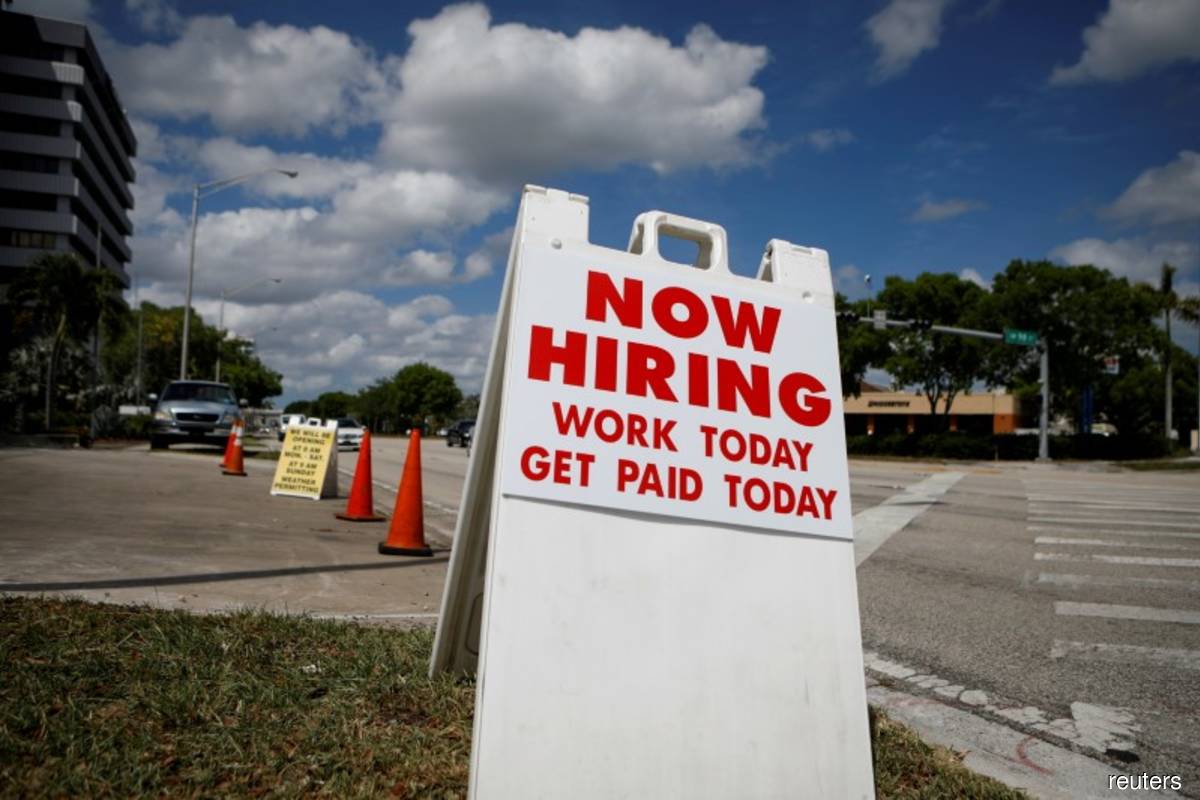 (Nov 12): The number of Americans voluntarily quitting their jobs rose to a record high in September, while job openings stayed stubbornly above pre-pandemic levels, a sign that businesses may have to continue to raise wages in order to attract workers.

Wage inflation shows few signs of abating even as the daily case rate of coronavirus infections ebbs, with employers in almost every industry competing to lure workers and three million fewer people in the labour force compared to pre-pandemic levels.

The scramble for workers boosted wage growth to an annual increase to 4.9% in October, although this has been outstripped by overall inflation, leading to a fall in real earnings.

A separate survey by the University of Michigan, also on Friday, showed consternation among consumers with sentiment on the economy falling to a decade low, with few believing policymakers are taking sufficient steps to tackle inflation.

Quits rose by about 164,000 in September, lifting the total to a record high of 4.4 million. The quits rate is seen as a good measure of labour market confidence, as workers leave when they are more secure in their ability to find a new job.

There were 56,000 people who quit in the arts, entertainment and recreation industry, while 47,000 left in the other services category. State and local government education saw 30,000 departures.

"The continued surge in quits points to wage growth of between 4.5%-5.0%, well above rates that would be consistent with inflation falling sustainably back towards the Fed's 2% target," said Michael Pearce, senior US economist at Capital Economics in New York, following the report.

The Federal Reserve has so far resisted calls to take stronger action to combat higher-than-expected inflation, arguing that it remains transitory even if it persists well into next year. The central bank announced at its last meeting that it will begin to taper its massive bond buying programme this month, seen as precursor move to raising interest rates from their current level near zero. Investors currently expect a rate liftoff in mid 2022.

Job openings, a measure of labour demand, edged down by 191,000 to 10.4 million on the last day of September. Hiring also remained largely unchanged at 6.5 million in September. The number of job openings was little changed in all four regions with vacancies increasing most in healthcare and social assistance, and state and local government, excluding education.

The government reported last Friday that nonfarm payrolls increased by 531,000 in October, after posting gains of 312,000 in September. Job growth has averaged 582,000 per month this year.

Labour shortages could persist a while longer, even as the Delta wave of Covid-19 infections slide from their mid-September high. All-time high savings fueled by government aid, as well as a strong stock market and record house price gains, look set to continue to provide a short-term buffer as workers weigh up when to re-enter the jobs market. Higher-than-normal early retirements are also playing a role.

That said, there is hope that with infections declining and schools fully reopened for in-person learning, more people will rejoin the labor force once excess savings helped by the generous government aid, some of which has ended, is depleted.

Fewer Americans are feeling better about the economics outlook, at least in the short term. US consumer sentiment plunged in early November to the lowest level since November 2011, as surging inflation cut into households' living standards, the University of Michigan's consumer sentiment survey showed. Its index dropped to 66.8 in its preliminary November reading, from October's final reading of 71.7. Economists polled by Reuters had forecast a reading of 72.4.

"One-in-four consumers cited inflationary reductions in their living standards in November, with lower income and older consumers voicing the greatest impact," Richard Curtin, the survey's director, said in a statement.

There is a "growing belief among consumers that no effective policies have yet been developed to reduce the damage from surging inflation," he added.

Consumers see inflation in the year ahead accelerating at a 4.9% pace, the fastest since 2008, though they continue to expect it to abate over the medium term, with the five-year outlook at 2.9%, the survey showed.