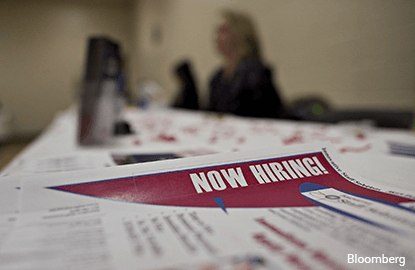 WASHINGTON (March 23): The number of Americans filing for unemployment benefits unexpectedly rose last week, but remained below a level associated with a strengthening labor market.

Initial claims for state unemployment benefits increased 15,000 to a seasonally adjusted 261,000 for the week ended March 18, the Labor Department said on Thursday.

Claims for the prior week were revised to show 2,000 more applications received than previously reported. The government revised the claims data going back to 2012 and published new seasonal factors for 2017.

Claims have now been below 300,000, a threshold associated with a healthy labor market for 80 straight weeks. That is the longest stretch since 1970 when the labor market was smaller. The labor market is currently near full employment.

The four-week moving average of claims, considered a better measure of labor market trends as it irons out week-to-week volatility, rose only 1,000 to 240,000 last week.

US stock index futures were modestly higher as investors turned their attention to President Donald Trump's first significant policy test, as he looks to get a Republican-sponsored healthcare bill passed in Congress.

Prices of US Treasuries were mostly lower, while the dollar was slightly higher against a basket of currencies.

The claims data covered the period during which the government surveyed employers for March's nonfarm payrolls report. The four-week average of claims fell 7,750 between the February and March survey weeks, suggesting another month of strong job gains.

Job growth has averaged 209,000 per month over the past three months and the unemployment rate is at 4.7%, close to the nine-year low of 4.6% hit last November. Tightening labor market conditions and rising inflation enabled the Federal Reserve to raise interest rates last week.

Thursday's claims report also showed the number of people still receiving benefits after an initial week of aid fell 39,000 to 2.0 million in the week ended March 11.

The four-week average of the so-called continuing claims declined 32,000 to 2.0 million.