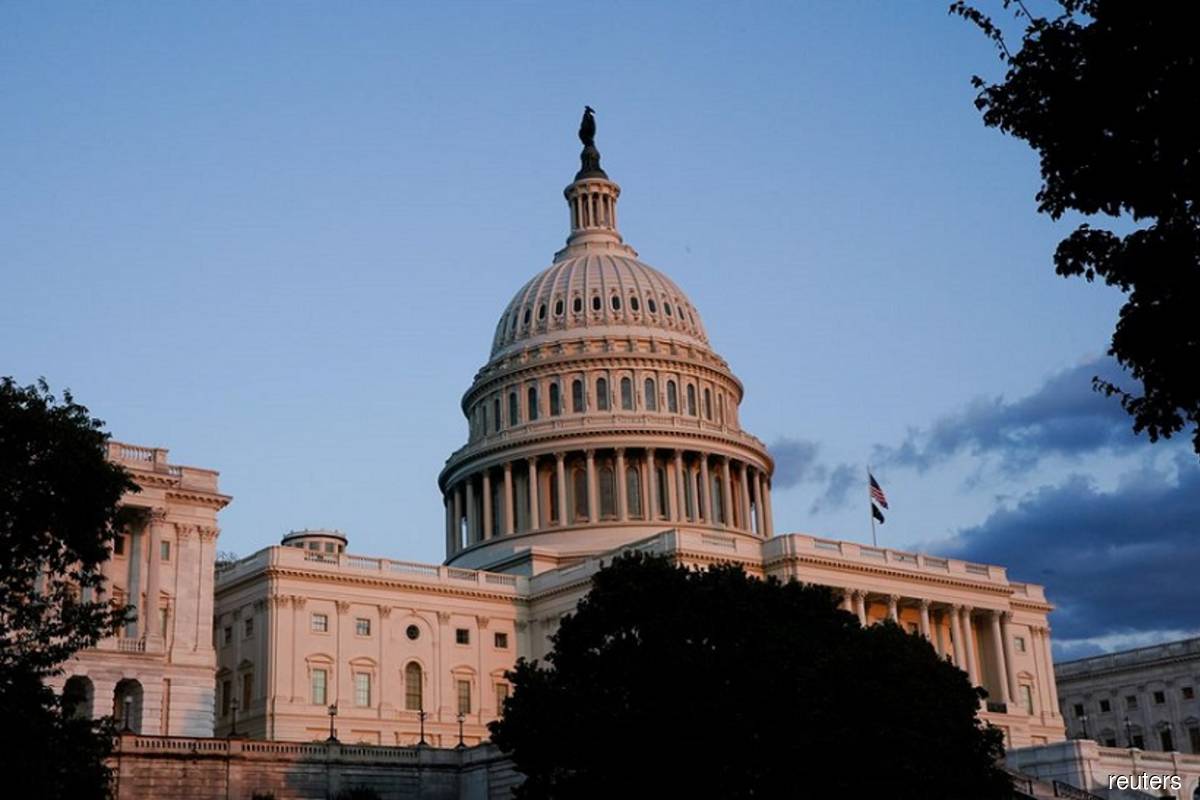 The US Capitol building on Capitol Hill seen during sunset in Washington, US on Sept 30, 2021. (Photo by Elizabeth Frantz/Reuters filepix)

WASHINGTON (Oct 6): As US Senate Democrats planned a third attempt on Wednesday to get Republicans to help raise the federal government's borrowing authority, pivotal Democrat Joe Manchin rejected the idea of changing the chamber's filibuster rule to circumvent the roadblock.

After a months-long standoff in which Senate Republican leader Mitch McConnell repeatedly said his party would not vote to lift or extend the US$28.4 trillion debt limit, President Joe Biden on Tuesday suggested he was open to fellow Democrats changing the filibuster to skirt the roadblock.

On Wednesday, Manchin, a moderate senator who has blocked other parts of Biden's agenda as too expensive, poured cold water on the idea.

"I've been very, very clear where I stand on the filibuster. I've been very clear nothing changes," he said in a brief Capitol Hill news conference. "We are not going to default as a country. We will not default."

He declined to respond to reporters' questions about how Senate Democrats might address the crisis.

The Wednesday afternoon procedural vote is intended to allow the Senate to begin debating a bill that would suspend the debt limit until December 2022, after elections that will determine control of Congress for the next two years.

That passed the Democratic-controlled House of Representatives last week but Republicans have stalled it in the Senate with the filibuster.

Senator John Thune, the chamber’s No. 2 Republican, told reporters that talks between McConnell and top Democratic Senator Chuck Schumer aimed at finding a solution could begin after Wednesday's vote, which he predicted would fail.

"At some point, obviously, there has to be a conversation between the leaders about that path forward," Thune said. "There will probably be some developments."

Without a quick resolution, some government services might be suspended, such as delivering Social Security benefit cheques.

Hours before the planned vote, McConnell again said he thought Democrats should use the Senate's reconciliation process to raise the debt ceiling without Republican votes.

With less than two weeks to go before the Treasury Department expects to run out of ways to meet the government's expenses around Oct 18, Democrats are looking at all their options.

McConnell has been pushing Democrats to use reconciliation, as they did earlier this year to pass Biden's US$1.9 trillion Covid-19 relief package and plans to use again to pass a multi-trillion-dollar bill to bolster the social safety net and fight climate change.

Democrats have refused, saying Republicans should vote to raise the limit, since the debt includes about US$8 trillion in spending approved during Republican Donald Trump's four-year presidency.

While reconciliation can be a long process, sometimes involving all-night "vote-a-rama" sessions, McConnell said it could be sped up.

"There would be a potential for time agreements to wrap it up well before any danger," he said. "But the Democratic leaders wanted ... to turn their failure into everybody else's crisis, play at risky games with our economy using manufactured drama."

Biden said on Tuesday that it was a "real possibility" that Democrats instead might use their current razor-thin majority to drop the Senate's filibuster rule, which requires 60 of the chamber's 100 members to agree to pass most legislation.

Biden, had previously opposed changes to the filibuster, which is meant to help maintain government stability through election cycles.

Making the change would head off the risk of a crippling default and allow them to focus on passing two mammoth spending bills that make up the bulk of Biden's domestic agenda.

But without Manchin's support, the idea had no chance of becoming reality in the Senate where Republicans and Democrats are split 50-50 and Vice President Kamala Harris, a Democrat, holds the tie-breaking vote.

Seeking to underline the severe economic risks of a default, Biden will meet on Wednesday with a group of CEOs of major corporations including JPMorgan Chase & Co, Intel Corp and Nasdaq Inc.

The Bipartisan Policy Center on Wednesday issued forecasts on when some federal payments could be postponed as a result of the standoff. Unemployment insurance payments due Oct 20 could be delayed five days, federal salaries for civilian employees due Oct 29 could be pushed back to Nov 9 and Medicare payments to doctors could be delayed from Nov 1 to Nov 19, it said.

"If the United States defaults, it would undermine the economic strength on which our national security rests," Secretary of Defense Lloyd Austin said in a statement on Wednesday.

Even a close call would likely be damaging. A 2011 debt ceiling dispute, which Congress resolved two days before the borrowing limit was due to be reached, caused stocks to tumble and prompted a first-ever credit downgrade for US debt.

Moody's Investors Service said on Tuesday that it expects Washington will raise the debt limit by reconciliation.