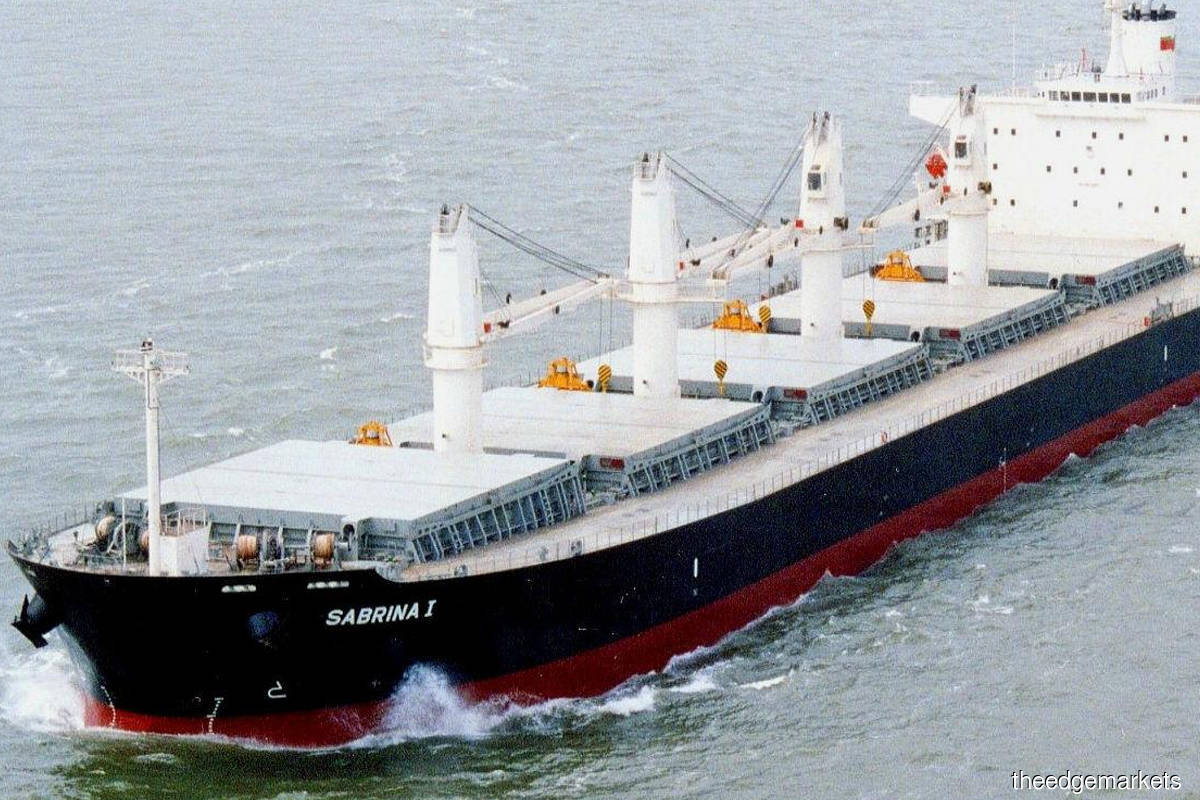 THE sharp drop in dry bulk freight rates since the start of October is merely a corrective pullback from recent highs, market players say, adding that the rates are expected to remain above pre-pandemic levels.

But the market will be susceptible to further swings going into 2022.

The Baltic Exchange Dry Index (BDI), a bellwether for global dry bulk shipping, on Nov 17 fell to a low of 2,430 points — its lowest level in five months, on the back of easing port congestion in China, the ongoing steel production restrictions in China and weaker iron ore and coal shipments. This represents a 57% drop from the peak of 5,650 points on Oct 7. However, the index, which factors in rates for capesize, panamax and supramax vessels, was still up 98% year to date to close at 2,715 points last Wednesday (Nov 24).

The retreat in freight rates, however, has led many to speculate on whether the rally in the dry bulk market could be short-lived. Dry bulk shipping companies have only just seen their fortunes reverse in 2021 after suffering from depressed freight rates due to excess capacity in the industry since the 2008 global financial crisis. The BDI began to accelerate in January to hit a decade high of 5,650 points on Oct 7, partially attributed to congested ports due to the Covid-19 pandemic and robust demand for dry-bulk commodities. The under-investment in new vessels in recent years has also helped support higher dry bulk rates. Ling: Rates may not climb to ridiculously high levels like recently, but they will remain very high

Hubline Bhd CEO and managing director Dennis Ling Li Kuang shrugs off concerns that the good times for dry bulk shipping companies are over, noting that near-term fundamentals of the dry bulk market remain strong. He says it is normal for the market to experience some correction following its run-up to an all-time high in October.

“When things move up too high, obviously there will be a correction at some stage. But I do not expect freight rates to return to pre-pandemic levels so soon,” he tells The Edge.

“In recent months, prices of commodities such as coal have dropped as buyers hold off making purchases as prices continue to fall. But at some point, volume will stage a comeback. I don’t see that the tide has turned [for dry bulk operators] because port congestions are still a serious problem. Port congestion in the US, for example, has yet to let up and this problem is compounded by labour shortages,” he adds.

The supply tightness in the dry bulk market is also expected to continue into 2022.

“There is no big increase in [vessel] capacity yet. If you order a new building today, the time it takes to build it is anywhere from one to 1½ years. And steel prices are still very high, so a new building will cost you a lot more money,” he explains.

Ling points to the strained relations between top steel producer China and Australia, the biggest iron ore supplier to the former, noting that China will try to diversify its iron ore import needs away from Australia to alternative suppliers such as South Africa and Brazil, which are further away, thereby soaking up capacity and pushing up spot rates. Boyle: Platts Analytics believes volatility in dry bulk freight rates will continue for the remainder of 2021 and 2022

“The US has also just approved a bill to overhaul the nation’s infrastructure. These projects would require various raw materials like steel, which would see the US having to import them from countries such as China. All these factors will help sustain dry bulk rates for quite a while,” he says.

Looking into the future, Ling expects volatility in the dry market to continue, but overall dry bulk freight rates will remain stable within a controllable range. “Rates may not climb to ridiculously high levels like recently, but they will remain very high.”

Matthew Boyle, head of coal and Asia power analytics at S&P Global Platts, concurs. The commodities and energy pricing agency is expecting volatility in dry bulk freight rates to continue for the rest of the year and into next year.

Boyle says there has been quite a bit of volatility in dry bulk rates over the past month, particularly in the capesize market. “The mini-rally we have seen in the capesize rates is probably more due to freight rates overcorrecting on the downside, and a small recovery as the market looks for a level matching market fundamentals. It should be noted, however, that most of the volatility has been in the larger capesize dry bulk freight rates — smaller vessel rates have not rallied,” he tells The Edge.

Boyle notes that going forward, there will probably be more upside risk than downside in capesize freight rates, as evidenced by the mini-rally.

“Platts Analytics believes volatility in dry bulk freight rates will continue for the remainder of 2021 and 2022. From a commodity perspective, it is expected that dry bulk commodity demand will continue to recover as economies exit from pandemic-related lockdowns,” he says.

“Of key concern for the dry bulk market will be high levels of vessel congestion, particularly in China and the Pacific Basin, which will limit vessel availability. The lingering impact of the coronavirus pandemic is likely to also influence dry bulk freight rates, especially if restrictions are reintroduced.” If Malaysian Bulk Carriers Bhd’s (Maybulk) results are anything to go by, the profits are rolling in for dry bulk operators. The group posted a 453% jump in its nine-month earnings to RM160.64 million, while its revenue rose 19% year on year (y-o-y) to RM158.92 million.

Maybulk said in its quarterly results note on Nov 22 that the recent rebound in the dry bulk market has seen freight rates hit a decade high and this has been exacerbated by stringent Covid-19 protocols enforced at various ports, particularly in China, creating supply chain bottlenecks.

“Changes to trade patterns, such as Chinese coal sourcing, have been accretive in tonne mile terms. All these factors are set against a backdrop of historically low fleet growth due to the poor dry bulk market in the last decade,” it added.

However, Maybulk noted that dry bulk charter rates have softened notably since late October, with China restricting steel output as well as imposing a cap on coal prices for domestic suppliers.

“The ship sale and purchase activities have also slowed down with potential buyers holding back in anticipation of a correction in asset prices. While port congestion and logistics inefficiencies are still present, we expect freight rates to remain volatile going into 2022, with global growth likely to slow down from 2021 levels,” it said.

Maybulk’s share price has also come off 25% from its October highs to close at 59 sen last Wednesday (Nov 25), bringing the company’s market capitalisation to RM535.57 million. However, the stock is still up 3.85% year to date.

According to Ling, Hubline has seen its freight rates rise by 50% to 70% y-o-y, and although dry bulk freight rates have fallen since October, the Sarawak-based shipping company has yet to make downward adjustments to its rates as its vessels are fully booked until February next year. It owns 23 sets of tugs and barges, with a capacity of 8,000 to 11,000 tonnes.

“We carry dry bulk cargo between countries in Southeast Asia. As far as cargo movement in the region is concerned, it is still very strong,” says Ling.

“While yes, shippers are asking for lower freight rates, they don’t get them because there is limited availability of vessel capacity. For example, less than 20% or 30% of our vessel space caters for the spot market. And these spot rates were fixed one to two months ago.”

Hubline has yet to announce the results of its fourth financial quarter ended Sept 30 (4QFY2021), but it returned to the black for the nine months ended June 30, recording a net profit of RM12.74 million compared with a net loss of RM13.87 million a year earlier.

Ling declined to comment on its 4QFY2021 performance except to say that he expects the company to end FY2021 on a positive note. “We remain positive going forward as we have been able to enjoy higher freight rates from the September quarter onwards.”