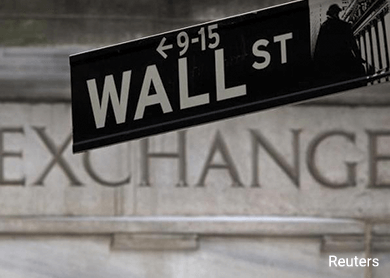 Shares of Dow component McDonald's soared 7.5% to US$110.18, after its quarterly earnings and revenue beat estimates as demand recovered in China. The stock gave the biggest boost to the S&P 500 and the Dow.

Technology majors Microsoft, Alphabet, AT&T and Amazon are due to report after the close.

"I think expectations are pretty low for everybody and that's probably why you're seeing some beats here," said Tom Cassidy, chief investment officer at Girard Partners.

Cassidy said the biggest factor for investors scrutinizing the reports would be revenue, which has been hurt by a slowing global economy and a stronger dollar.

The dollar index inched up, after the European Central Bank left interest rates unchanged. The index has risen roughly 5% this year.

European Central Bank President Mario Draghi said the bank could extend its stimulus program beyond 2016, as part of its efforts to boost euro-zone growth and bring inflation closer to its target of close to 2%.

EBay rose 10% to US$26.62 and Texas Instruments was up 9.5% at US$56.85, after they reported better-than-expected third-quarter results late on Wednesday.

The Federal Reserve, which kept interest rates unchanged at near-zero levels at a September meeting, has said it will wait for signs of global economic resilience before pulling the trigger.

Valeant Pharmaceuticals continued its slide for a second day, falling 13.6% to US$102.67.

Community Health Systems sank 29% to US$28.82, after it posted disappointing outlook. Other hospital operators Lifepoint, HCA Holdings and Tenet Healthcare were also down 6% to 15%.

American Express fell 5.9% to US$72.03, after its quarterly profit missed estimates.

Kinder Morgan slid 4.9% to US$29.90, after the pipeline company said its dividend payout would slow next year.