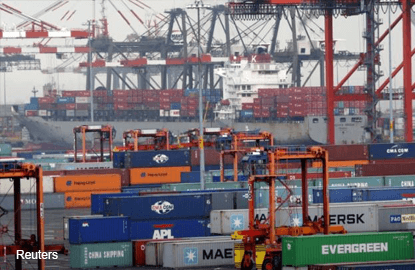 WASHINGTON (Jan 27): U.S. economic growth slowed sharply in the fourth quarter as a plunge in shipments of soybeans weighed on exports, but steady consumer spending and rising business investment suggested the economy would continue to expand.

Gross domestic product increased at a 1.9% annual rate, the Commerce Department said on Friday in its first estimate of fourth-quarter GDP. That was a deceleration from the 3.5% growth pace logged in the third quarter.

As a result, the economy grew only 1.6% in 2016, the weakest pace since 2011. Growth last year was constrained by cheap oil and a strong dollar, which hurt company profits and undercut business investment.

An inventory correction also eroded growth. Those impediments to growth are mostly out of the way. The economy expanded 2.6% in 2015.

In the fourth quarter, exports fell at a 4.3% rate, reversing the 10% increase notched in the third quarter. The fourth-quarter drop in exports was the biggest since the first quarter of 2015.

Economists polled by Reuters had forecast GDP rising at a 2.2% rate in the fourth quarter.

pared gains while the dollar fell against the euro and yen.

With a labor market at or near full employment starting to lift wages and supporting consumer spending, the outlook for the economy is fairly bright. Growth this year could also get a boost from President Donald Trump's pledge to increase infrastructure spending, cut taxes and reduce regulations.

Although Trump has offered little detail on his economic policy, his promises have been embraced by consumers, businesses and investors. Consumer and business confidence have soared, while the U.S. stock market has rallied to record highs.

But uncertainty over the Trump administration's trade policy poses a risk to the economy.

A stronger economy would also mean further interest rate increases from the Federal Reserve. The U.S. central bank has forecast three rate hikes this year. It raised its benchmark overnight interest rate in December by 25 basis points to a range of 0.50% to 0.75%.

Consumer spending, which accounts for more than two-thirds of U.S. economic activity, increased at a 2.5% rate in the fourth quarter. It rose at a 3.0% pace in the third quarter.

Income at the disposal of households increased 3.7% in the fourth quarter, after a robust 4.1% rise in the prior period.

Business investment shifted into higher gear, with spending on equipment increasing at a 3.1% rate after four straight quarterly declines. The gain reflects a surge in gas and oil well drilling, in tandem with rising crude oil prices.

Spending on mining exploration, wells and shafts increased at a 24.3% rate, after declining at a 30.0% pace in the third quarter. Energy services firm Baker Hughes said last Friday that U.S. energy companies added 29 oil rigs in the week to Jan 20, bringing the total count to 551 - the most since November 2015.

Investment in nonresidential structures, however, fell at a 5.0% pace in the fourth quarter after rising at a 12.0% rate in the prior period.

Investment in home building rebounded after two straight quarterly declines, contributing to growth. Government spending picked up as a rise in state and local government investment offset a decline in federal government expenditures.