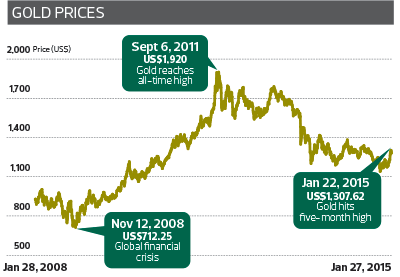 Gold prices have been on the rise due to uncertainties in the global market, say industry observers. Seen as a safe haven, the precious metal is traditionally favoured during times of rising inflation.

“Gold is slowly finding favour again with investors. Factors acting as a support for gold prices are the European Central Bank’s quantitative easing programme, the Greek elections and [the fact that] 2015 is looking to be quite volatile,” says David Ng, derivative products specialist at Phillip Futures Sdn Bhd.

“In market situations such as these, investors usually flee from the more risky assets to safe havens, like gold,” he adds.

In the recent Greek elections, the “anti-austerity” Syriza party emerged the winner after securing 36.3% of votes. Initial news reports and market observers said Syriza’s pledge to end Greece’s austerity measures would put the country at odds with its European creditors, thus risking its position in the eurozone and worrying global financial markets.

While gold prices fell slightly after Greece’s Prime Minister Alexis Tsipras pledged to keep the nation in the eurozone, signs are pointing to a recovery in the gold market in 2015 after being shunned for years by investors looking for yields.

David Crichton-Watt, managing director and investment manager at AIMS Asset Management Sdn Bhd, believes we have seen the bottom of the gold market and things are starting to pick up. “The buying of physical metal in China, India and Dubai has really contributed to gold’s demand,” he says.

According to data from the World Gold Council, China and India alone account for about half the world’s demand for gold. Although India saw less demand last year, it still averaged 895 tonnes over the past five years. Meanwhile, data from the Dubai Gold and Commodities Exchange showed that gold trading volumes hit 41,945 contracts in December 2014, a growth of 14% year on year.

Gold last enjoyed a strong bull run between 2008 and 2011, when its value doubled to a record US$1,923.70 per ounce on the back of large amounts of hedge-fund buying. Prices tumbled in late 2011 when investors pulled out from the precious metal and turned towards the US dollar after the Federal Reserve announced its bond-buying programme.

Oil prices, which fell to US$45 a barrel on Jan 26, have also contributed to the rise of gold. Crichton-Watt says many of the US oil and gas companies cannot break even at these prices as they have high capital expenditure.

“These companies, which are engaged in large quantities of oil fracking, will see their profits go down. This could be negative [news] for the stock market. If the stock market suffers and unemployment rises again, there will be positive demand for gold,” he adds.

According to Chris Gan, vice-president of business development at the Singapore Precious Metals Exchange, volatility in currency markets usually contributes to the demand for gold.

“We have seen a pick-up in volatility in the currency markets over the past few months. Gold has benefited from this volatility, which was caused by the removal of the Swiss franc’s cap against the euro, the euro’s own decline as a result of the European Central Bank’s quantitative easing and geopolitical risks,” he says.

Risks to gold’s advance hinge on the US economy’s recovery and the dollar’s rally, according to Phillip Futures’ Ng. “Growth in the US economy is looking robust. When the economy does well, people tend to go into currencies. This has contributed to the strength of the greenback. When the dollar rises, gold usually becomes less appealing,” he says.

Investors who lack allocation for gold in their investment portfolio could start looking now as prices are still reasonable, according to Gan. He believes that with the International Monetary Fund cutting its global growth outlook for 2015 to 3.5% and the various geopolitical risks around the world, buying gold remains a prudent approach to hedging against unanticipated shocks.

“I would recommend 5% to 10% allocation for investors. But this also depends on your objective of buying. If you are a trader and you think prices are worth a punt, now is a good time to trade, either through exchange-traded funds or paper gold,” Gan says.

“At the current level of US$1,300, it is still all right [to buy because] frankly, I don’t see how prices can go any lower.”

Gan says prices would matter less to long-term investors as they usually buy physical gold. “If you are an investor, and you think the world is in a bit of a turmoil and you don’t like what you see, you could turn to physical gold.

“Investors who buy physical gold don’t really care about [the timing] when they go in because they are looking to hold on to the asset for the long term.”

Gan believes gold could rise to US$1,500 this year. “The global economic uncertainties and geopolitical risks will help support gold prices.”

Phillip Futures’ Ng says that on a technical basis, gold prices are likely to advance further if they breach the US$1,300 level. “Prices are currently just below US$1,300. Assuming we breach that mark, the next resistance level we are looking at will be US$1,320. If gold falls, US$1,230 to US$1,250 will be the critical support levels.”