Zahid accused of contempt for allegedly lying to get trial adjourned 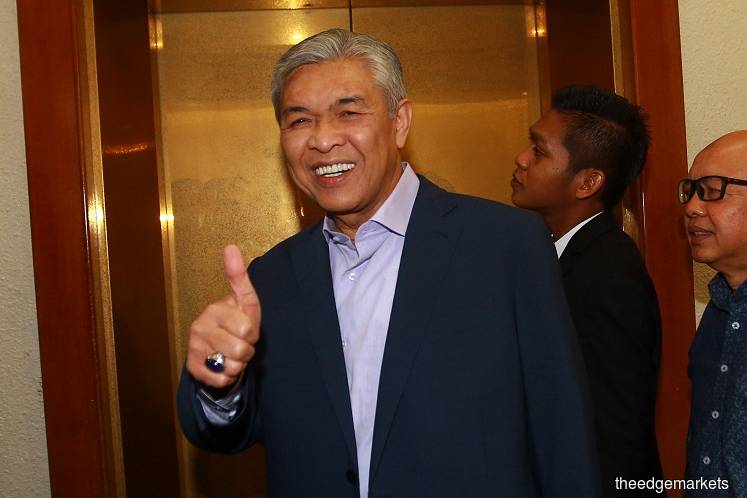 KUALA LUMPUR (March 2): Umno president Datuk Seri Ahmad Zahid Hamidi has been accused of contempt of court after the prosecution alleged that he had lied when seeking an adjournment for his graft trial today.

In seeking the adjournment, Zahid's lawyers said he had to attend a meeting today with Prime Minister Tan Sri Muhyiddin Yassin in Putrajaya, on the formation of the new Cabinet

News reports, quoting the Prime Minister's Office of Malaysia (PMO), however, indicated the PMO had denied that political leaders were scheduled to attend a meeting to discuss the formation of the new Cabinet under Muhyiddin.

Zahid's trial, which was scheduled this morning, was adjourned after the accused, via his lawyers Hisyam Teh Poh Teik and Datuk Ahmad Zaidi Zainal, sought an adjournment till tomorrow (Tuesday, March 3).

At 4pm today, Justice Sequerah summoned the parties involved to the court to explain the matter.

Zahid's lawyers said: "Datuk Seri (Zahid) went to Putrajaya to meet the prime minister. But the prime minister was not free as he had to rush to Muar. So my client was not able to meet him. We did not intend to mislead the court."

Justice Sequerah subsequently asked Zahid to give his own explanation.

Zahid said: "I received a letter from PMO. I was told to come at 12:30pm (today). Normally with a new government, political leaders are asked to meet to negotiate on Cabinet line up."

Raja Rozela disagreed with Zahid's explanation, alleging that it was a false statement.

"There was no meeting. It's a blatant lie. I would therefore like to move for contempt. He had misled the court to giving him a day off.

"A false statement made by an accused person is contempt.

"It is unacceptable. We have been made to look like a fool. We took their word in good faith and this is what we get," Raja Rozela said.

In Zahid's defence, Hisyam said Zahid will be able to produce the PMO's letter tomorrow to prove that he was invited for a meeting with the prime minister today.

After hearing the prosecution and defence's explanation, Justice Sequerah said he will decide on the matter tomorrow morning after receiving the PMO letter.

Zahid is facing 47 charges comprising 12 for criminal breach of trust, eight for corruption and 27 for money laundering involving millions of ringgit belonging to Yayasan Akalbudi.